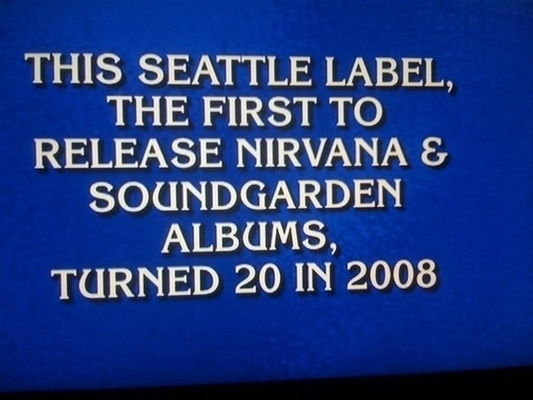 Last night Hardly Art General Employee Nick “My Big Fat Greek” Heliotis was sitting around the fire with his mom and grandmamma watching Jeopardy!, discussing the origins of democracy and butt sex just like they always do, when Nick nearly choked on his baklava. That’s right—the $1,000 answer was this: This Seattle label, the first to release Nirvana & Soundgarden albums, turned 20 in 2008. … Crickets. NO ONE got the question! Host Mark E. Trebek was obliged to answer with, “What is Sub-uh Pop-uh Records-uh” (Finally, definitive proof that absolutely everyone likes The Fall?). COME ON, MOTHERFUCKERS! We need to get more Jeopardy fans signed up for our Twitter feed, I guess.

No one answered the Atlantic and/or Capitol ones correctly, either, so we’re not really sweatin’ it. Other labels mentioned include Apple and Motown, and as our own Andy Kotowicz says, that’s pretty good fucking company to be in.