As you can probably glean from that gleaming album title above, Bret McKenzie—whom you know from such modern musical treasures as comedy duo Flight of the Conchords, the Muppets movie reboots and other ace kid-film soundtracks, Lord of the Rings fan blogs, guest songs for The Simpsons, cycling around the streets in his native New Zealand, and more— has a new solo record coming out filled with songs that ARE NOT COMEDY SONGS! For members of the press, we thoughtfully provide some irresistible story headlines below, for Bret’s sake and your convenience.

-Songs From One Bloke

-Three (Con)chords (Minus Two Conchords) and the Truth

-Uh-Oh! Rhymenoceros on the Loose!

-Bretty or Not, Here He Comes

There. Now doesn’t that feel better? Sometimes it helps just to get it out in the open.

So, yeah, Bret’s a ridiculously funny dude, and you might even call him one of the best comedy songwriters in the biz. (In Bret’s own words, there are fewer than a dozen people in the world writing comedy songs today, but who’s counting?) He’s had smash hits, he’s won major awards, he’s the better-dressed part of his duo…he’s got a good thing going! So, what gives with this whole “songs without jokes” solo stuff, man?

“Post-Conchords, I’d been working on songs for the Muppets films, and during a session I had the thought that it would be fun someday to work on some songs that weren’t for someone else, that doesn’t have to tell a story or be funny or continue the narrative plot, checking all the boxes for the character in the movie,” McKenzie says. “I thought it’d be fun to do a record like that, something different. It started as kind of a side project; it’s not like I’m trying to start a massive solo career or change the world with music. But now it’s turned into a full record and therefore requires quite a bit of time. It turns out it’s quite a big job, putting out a record. Why did no one try to stop me?”

The Conchords landed McKenzie and Jemaine Clement a hit HBO TV show, a BBC Radio series, chart-topping records, world tours, a Best Comedy Album Grammy, and a 2018 “reunion” special and accompanying live album, Live In London. McKenzie then transitioned to Hollywood, writing songs for 2011’s The Muppets (winning a “Best Original Song Oscar” for “Man or Muppet”), 2014’s Muppets Most Wanted, along with films in the Pirates! and Dora canons. But while he both enjoyed and excelled at the work, he also endured the tedium accompanying all that plot-bound specificity, and began wondering what directions his songs might go if set truly free. He had already noticed his writing vocabulary expanding organically, something he attributed to the emotional needs of the films. And so, while in Los Angeles a few years back, recording movie music with a crack assemblage of legendary session musicians, McKenzie started playing around with a tune or two he had written simply as songs—songs without any external direction, songs without plot-pushing concerns, songs without jokes.

“My songwriting had started to open up a little bit,” he says. “We were writing songs all the time in Conchords, but they were always based on a gag. Then the movie stuff often required more story and character, so sometimes what might be a funny song also had to be an emotional moment. I wanted to do some songs that didn’t have to be anything for anyone else, songs that could just exist. It’s kind of bizarre, because 99 percent of songs are like that—there’s only about 10 people who write comedy songs. So mostly this was just me wanting to write songs that didn’t have to do anything apart from be a song.”

Adding to his successful track record writing and performing across most genres of pop music, McKenzie is a fan of wry, literate artists like Harry Nilsson, Steely Dan, Randy Newman and Dire Straits. He’s a talented player of multiple instruments and a veteran of several non-comedy bands in New Zealand back in the day, most notably the reggae-based fusion group The Black Seeds. Yet, while songs without jokes are just as much in his blood as those with, he recognizes that most people who know his work will arrive expecting a laugh. Hence, the album’s title.

“When I tell people I’m doing an album, they hit this wall: ‘Is it comedy?’ I’ve been working on it for two years, so I’m well past that, but until people hear it, it’s harder for them to wrap their head around what I’m doing.”

Written mostly during the quieter moments of 2019, with his life split between work in Los Angeles and his family in Wellington, the songs of Songs focus on themes of escape, the perpetual search for peace, and navigating a life being pulled in multiple directions at once. There are also simple meditations on driving through a city, and the weather. McKenzie was inspired by the path his aforementioned idols like Newman and Nilsson had paved, where a silly or playful number could be sandwiched directly between a song about heartbreak or an earnest redemption and a scathing satire or character commentary. He threw a bit of everything into the mix, recording ideas on his phone at home in New Zealand after the kids had gone to sleep. Upon returning to LA, he would play the sketches for his longtime producer and collaborator, Mickey Petralia, who helped McKenzie identify the best moments, then together they would add parts and shape the songs. From there, longtime film collaborator Chris Caswell created charts for that same ensemble of session players with whom they’d recorded so many pieces for film. The majority of songs were then recorded at United Studio in Los Angeles in just a few takes.

“I love working in the studio with those guys, this older generation of LA session musicians, these Wrecking Crew type legends,” McKenzie says. “They’ve played on everything, it’s insane —Dolly Parton, James Taylor, Lionel Richie, everything. It’s quite old-fashioned; the band all get a chart and sit there and play the song two or three times and you’re done. It’s a bit like directing actors. I’ll say ‘This song should have a bit of a Steely Dan vibe, or, it feels like LA freeway music” and Dean, the guitarist, just goes, ‘Yeah.’ And we’re cracking up because it turns out Dean is one of the guitar players from Steely Dan. All those session guys are such a trip.”

“If You Wanna Go” charges out of the gates like a classic Randy Newman kiss-off served sunny-side-up, with an instrumentation that somehow manages to sound contemporary and vintage all at once. “A Little Tune” is a vampy, barroom piano romp with a great big smile, loads of style, and nary a yuk. And the driving, synth-laced rhythmic pulse and bathroom stall wisdom of “Dave’s Place” offer a sense of groove and strong, understated vocals that wouldn’t sound out of place on a Dire Straits record.

While the album may be free of traditional punch lines, it doesn’t lack a sense of humor. It showcases a new stage of McKenzie’s career, to be sure, but one that isn’t so far removed from his past work and true artistic self. Like Jim Henson before him, who made a career of blending the silly with the sincere and the playful with the profound, McKenzie also aims to connect rainbows to the ridiculous.

“I’m becoming way more comfortable in my own skin with songs that are a bit more personal. At first, I felt a little naked singing a song about how I’m not sure what to do with my life— compared to writing for fucking Kermit the Frog—but I’m getting more comfortable now with  the heartfelt. Instead of going for a laugh you’re creating these cool little moments. I love comedy songs but I don’t put a comedy record on while hanging out; I don’t drive around listening to standup, I listen to regular music. So it feels right to finally make a record of music I might want to listen to.” 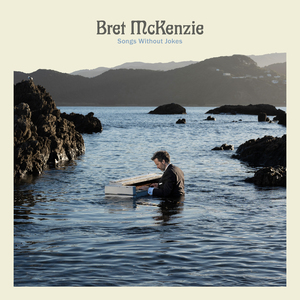