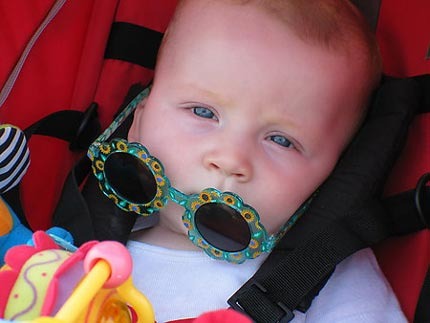 Though we haven’t worked with J. Robbins, many of us here have been/are fans of his work as a musician and producer. When the news below reached us, we felt compelled to pass it along to all of you. Please take a moment to read through it, and do what you can.

On January 27, 2006, our great friends and Channels members J. Robbins and Janet Morgan welcomed their first child, a son named Callum. He was 8-odd pounds and 20-odd inches of wriggling, squirming, screaming joy, and the apple of his parents’ eye.

As Cal grew, though, his parents began to notice that the expected developmental milestones – biting his toes, squeezing Janet’s finger, even rolling over and sitting up unsupported – weren’t happening. As a parent, you never want to think that something is wrong with your child. You bury your doubts and convince yourself that your baby is just different, that he’s got his own way of doing things, that he’s just “mellow.” You’ve got diapers to change, bottles to warm, baths to give. Life has to go on.

Sometime around Cal’s 8-month birthday in September, J. and Janet took him to his pediatrician for his regular appointment. They knew from the doctor’s grave tone that something was terribly wrong. Any parent — any human — reading this can understand the shock, horror, and pain that J. and Janet felt when they learned through subsequent visits with specialists that Cal was born with a genetic motor neuron disease called Type 1 SMA, or Spinal Muscular Atrophy.

The facts are brutal: SMA kills kids. The disease affects the brain’s ability to communicate with the voluntary muscles that are used for activities such as crawling, walking, head and neck control, breathing, and swallowing. Type 1 SMA is usually fatal; most Type 1 babies will die before their second birthday. Those infants who survive into childhood are in for a long road of occupational therapy, wheelchairs, and assistive devices. Despite years of work on its treatment and “ongoing promising research,” it has no cure.

J., Janet, and Cal live every day with this disease hanging over their heads, and the path before them is extremely expensive and consuming of their former “normal lives.” Cal will never be able to walk. Once he is old enough to require a wheelchair, he will be wheelchair-bound for life, which likely also means at some point he’ll need surgery to correct for scoliosis.

It is an understatement to call this a heartbreaking situation. It also stands to be an unbelievably expensive one, especially for a household where the only wage-earner is a self-employed indie recording engineer. It remains unclear just how helpful J.’s single-payer insurance will be.

Allopathic (“conventional”) doctors, while energetically engaged in research into this condition, can offer no cure for Callum. There may be some hope — even if only for a better quality of life — in alternative routes and therapies. These, of course, are not covered by health insurance.

We at DeSoto feel that we owe it to J., Janet, and Callum to explore any and every avenue that might help their little boy. Pursuing alternative treatments will very plausibly bankrupt them.

Our hope is that people whose lives J., Janet, and Cal have touched – with their music, their friendship, their work in the independent music community – can help. Every dollar you give will provide Cal support to pursue treatment for this terrible disease. Perhaps more important, it will provide J., Janet, and Cal some of the hope they need to play out this horribly unfair hand life has dealt them.

The info on how you can donate is here.