When Chris Cheveyo abandoned the finalized recording of his heavy instrumental post-rock band towards the end of 2010, it wasn’t out of a general cynicism towards expansive, heady music. There was just something about that specific palette of tones and the cut-and-dry melodrama of the songwriting that wasn’t satisfying anymore. So he culled his old habits and made a fresh start with Rose Windows, a Seattle-based sextet that drew upon everything from American folk to West Saharan guitar rock, from pentatonic proto-metal to traditional Persian music, from the darker corners of California’s early psych scene to the hazy atmospherics of contemporary drone artists.

It was a risky era for this sort of bold new venture—there was a lot of talk of austerity in 2010. People were upside-down on their mortgages. Gas prices were high. Not surprisingly, many of the new musicians of the Great Recession were solo bedroom artists, laptop producers, and lo-fi aficionados. It was a time to think small and live within one’s means. It was an inopportune time to create the kind of lavish, orchestral, spacious records that came out of the peak of album-oriented rock radio of the ‘70s. And yet that’s the kind of record Rose Windows made in the fall of 2011. Their debut album, The Sun Dogs, was a brave record—exploratory, diverse, and lush. It didn’t fit in with the escapist pulse of indie dance music, or the retrograde scuzz of garage rock, or the bucolic nostalgia of the breezy new folk scene. The Sun Dogs, with it’s bluesy dirge, exotic scales, and majestic sprawl, didn’t quite fit it anywhere. Yet its theme of “the everyday blues that capitalism and its hit man, religion, bring on all of us” was certainly apropos of the time.

Now it’s 2015 and everybody seems to be grumbling about urban development. Only a couple of years ago the economy was on the brink of collapse, but now we can’t build enough condos to satiate the demand for overpriced real estate. Aware of the concrete encroachment of Seattle’s rapid growth, Rose Windows left their native city and traveled down to Bogalusa, Louisiana to record their sophomore album at Studio In The Country, re-enlisting producer Randall Dunn (Earth, Cave Singers, Akron/Family) to capture their latest batch of songs. Geography inevitably leaves its mark on musicians, and there was a certain character to the Deep South—with its tradition of the delta blues and the swampy riffage of New Orleans—that resonated with the band. But there was also the allure of isolation. Whereas The Sun Dogs was an open-ended affair, an ongoing project comprised of multiple recording sessions, a rotating door of guest musicians, and months of sonic tinkering and exploring, their self-titled album was meant to be a focused, deliberate, streamlined process. Both the location and the isolation can be heard on the resultant Rose Windows. If The Sun Dogs sounded like an American rock band drawing upon ideas from the Old World, then their self-titled record sounds like an American rock band delving deep into the underbelly of their own heritage, dredging up its stories with the requisite grit and grime of the fertile Southern soil. The Sun Dogs sounded like a band feeling out the parameters of their abilities. Rose Windows sounds like a band that’s honed in on their strengths and fortified their approach.

Rose Windows begins with “Bodhi Song”, a hat tip to the Buddhist concept of spiritual enlightenment. Bodhi literally translates to “awakened”, and the song’s rousing trajectory from a dusty Morricone twang to a shimmering vista of minor-key Americana fittingly captures the sensation of rubbing the sleep from your eyes and seeing the world open up in front of you. This expansion of sound leads into the distorted stomp and swagger of “Glory, Glory”, where Veronica Dyes’ flute lines mesh with the gnarled fuzz bass of Richie Rekow and thunderous riffs of guitarists Chris Cheveyo and Nils Petersen—a tonal duality reminiscent of the heavy blues and prog proclivities of Jethro Tull. Petersen mentioned that Rose Windows marks a departure from the pastoral worldview of The Sun Dogs and focuses instead on the nature of human interaction within the choked cityscape. “Blind” and “Strip Mall Babylon” both demonstrate this newfound focus, with vocalist Rabia Shaheen Qazi railing against “another goddamn fool uprooted from the garden of his youth” and wondering “was I born to lose my culture to Babel?” In both cases, the musical backdrop fluctuates between a casual swagger and a forceful thrust, as if the band strives towards a more reserved groove, but ultimately can’t hold back from hammering the point home with a barrage from their instruments. The band asserts that they made a concentrated effort to move away from their folk and ‘60s pop influences, yet “Come Get Us Again” affirms Rose Windows’ gift for stately sweeping melodies in the singer-songwriter tradition. The founding members—Cheveyo, Petersen, and drummer Pat Schowe—cut their teeth playing heavy, cinematic post-rock, and vestiges of that brand of instrumental interplay can be heard in the patient build-ups and psychedelic crescendos of “The Old Crow” and “Aurora Avenue”. The album ends with the grandiose beauty of “A Pleasure To Burn” and “Hirami”, a two-part coda that serves as a comedown from Rose Windows’ aural journey. If the album opened with an awakening, it closes with a lullaby.

The role of time and space has always played a major role in guiding the sound of Rose Windows. Whether you see a bright future or impending calamity, whether you thrive on the pulse of the big city or pine for the solace of nature, Rose Windows perfectly encapsulates the human experience within our world in the 21st century. 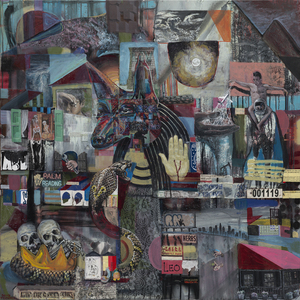 Rose Windows There Is a Light 7 inch / Digital