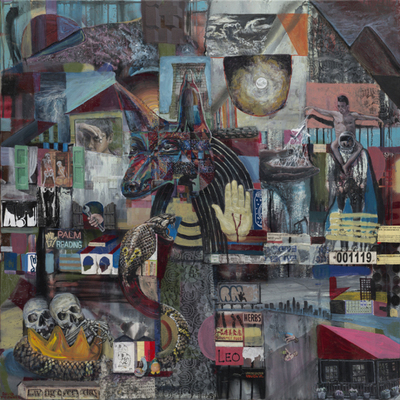 You can now listen to Rose Windows “Strip Mall Babylon, a new offering from the group’s forthcoming, self-titled and final album, due out May 4th on Sub Pop.

Stereogum premiered the track and had this to say, ““Strip Mall Babylon” suggests the album is well worth hearing (we can attest to this suggestion). The song starts deceptively with a slinky groove, before Qazi’s Joplin-esque roar explodes over thick, fuzzy guitars and searing organs. It’s a victorious sign-off for a band with a brief but impressive run. Hear the track below.(see track premiere April 14th).”

Preorders for Rose Windows are available now from Sub Pop Mega Mart, iTunes, Amazon and Bandcamp. All customers who pre-order the LP version of the album from megamart.subpop.com will receive the “Loser Edition” on red & black marbled vinyl, and a limited edition 7” which features the songs “Never Did Me Wrong” and a cover of Led Zeppelin’s “The Wanton Song” (while supplies last). Additionally, there will be a new T-shirt design available in two colors, both individually and as part of a bundle with purchases of the new record.

Rose Windows recently shared the news of their dissolution through their Facebook page (read more here) and have canceled all scheduled live dates. With that said, we are very proud to have released two albums with Rose Windows, and wish them well in their future pursuits, both musically and otherwise.