Seattle punk trio So Pitted are our newest signees!  And we at Sub Pop are proud to release neo - their label debut - throughout the known universe on February 19th, 2016.

The album, featuring highlights “rot in hell”, “holding the void”, and “feed me”, was co-produced & mixed by So Pitted & Dylan Wall and recorded at The Old Fire House, Media Lab, Spruce Haus, the band’s practice space and Tastefully Loud in Seattle. neo was also engineered by Wall at Tastefully Loud and mastered by Eric Boulanger at The Bakery in Los Angeles.

So Pitted’s neo is now available for preorder from Sub Pop Mega Mart, iTunes, Amazon, Bandcamp and Google Play. LP preorders of neo through megamart.subpop.com will receive the limited “Loser”edition on white vinyl (while supplies last).

COOL THING ALERT:  There will also be a time-limited edition T-shirt, hand-bleached by So Pitted, that will be available only during pre-order.  Shirts can be ordered alone or with LP and CD bundles (might we stress again: during pre-order only).

Impose Magazine premiered the visual for “rot in hell” (directed by Zoë Sauer) and had this to say about it:

“Ragged, nonlinear, a little dangerous, “rot in hell” was one of the first tracks So Pitted wrote together, and the video is funny and surreal, featuring a friend of the band playing various band members. It feels like being at home at a basement show, ready to hit your head on a low ceiling bringing your amp down the stairs, buzzing with a little bit of nausea and excitement. It burns with the urgency of the music you need to make or you’ll crumple, music you’d be making whether other people heard it or not” (see Nov. 12th news story). 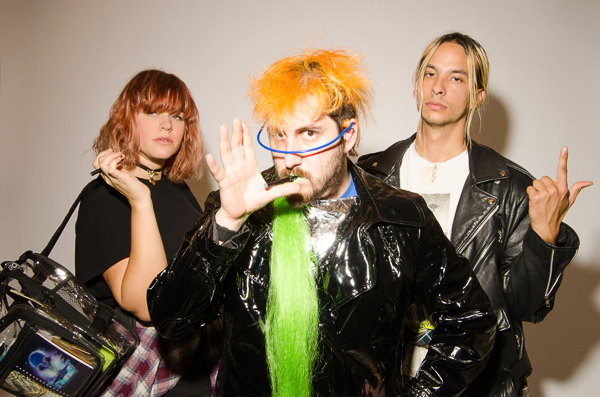 So Pitted will tour extensively in 2015-16 to support neo, beginning with a short US west coast trek November 14th in Oakland at LoBot Gallery and ending November 19th in San Francisco at the Hemlock Tavern. (see tour details below) The band will then resume touring in early January, with a series of support and headlining dates, which span January 8th in Brooklyn at Palisades through January 12th in Philadelphia at First Unitarian Church. Highlights along the way include November 18th in Los Angeles at the Echo opening for No Age and a few dates with label mates METZ and Startime International recording artists Bully (January 9; 11-12).


More about So Pitted:
So Pitted is every bit as much an experiment in social partnerships as it is a noise outfit. They bonded over a shared love of alternative music (Rage Against the Machine, Smashing Pumpkins, Nine Inch Nails, The Mars Volta), and only after eons of hanging out did it occur to them to play music together. Rodriguez is a self-taught quick study who learned music theory on Wikipedia; Downey is a new wave fanatic who sticks pipe cleaners in his brain to speak to extraterrestrials; Koewler is a longtime ballet dancer whose love of aesthetes and bands like Cocteau Twins is a strong influence on her bandmates. Together, the trio just fits, a perfect balance for one another’s quirks, strengths, and shortcomings.

Enter neo, So Pitted’s debut album some years in the making. These eleven tracks are lean and snarling rebukes, torch songs not in the traditional, unrequited-love sense, but songs that will torch your fucking house down. Screams and howls overtake chants and muttering, equal parts dejection, rejection, and convection, the hot, muggy air circling continuously. It’s fuzzy, angular, throbbing, and pounding, and still, ingrained in the songs by their makers, breathes that catchy quality present in so much of the music they love. Songs like “holding the void,” “rot in hell,” and “woe” crash over and over, turning under themselves like waves, but as the measures tick off, the dog-eared melodies and familiar themes begin to reveal (read more about the band here).