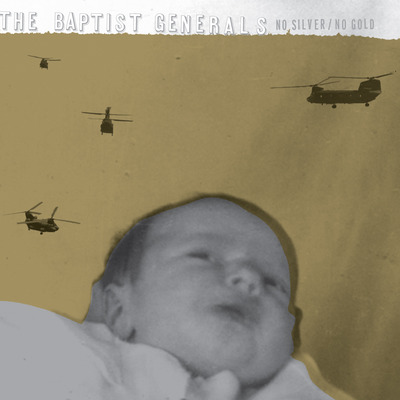 For the Record #9 comes to you courtesy of Fruit Bats’ front man, Eric Johnson.

Eric Johnson is a good dude and a great musician (currently splitting his time fronting his band Fruit Bats and playing in The Shins). He drinks fine wine and plays in fine wineries and has a great appreciation for film and, of course, music. He’s an easy one to talk to but if you ever wanna talk about The Baptist Generals in particular then he’s really your guy. Keep reading for Eric’s thoughts on No Silver/No Gold.

Band: The Baptist Generals
Record: No Silver/No Gold
When we told you the first time: February 4th 2003

This album came out right around the same time as The Fruit Bats’ Sub Pop debut, so we ended up hanging with these guys a bunch at showcases and such. I think this record is brilliant, and to call it “underrated” would be an understatement.

The opening track, “Ay Distress”, is a sparse little heart breaker that ends abruptly with a cell phone going off in the studio, followed by pandemonium. Its a moment that caught me way off guard the first time I heard it and kind of blew my mind in the process. I can’t really think of any other album that starts you off this way; its a really cinematic moment, raw and weird. Then track two, “Alcohol” kicks in almost immediately, up-tempo and sounding more like a traditional album opener. This is the kind of sweet-ass, emotionally manipulative one-two punch that I’m a sucker for.

You’ve got really heavily strummed nylon-string guitars, a guitarron (a huge plucked guitar used in Mariachi bands) in lieu of a traditional bass, and Chris Flemmons’ insanely powerful lungs singing like his life depends on it. The real hit tune is “Going Back Song,” which is a pop beauty put through the freaky dark Tex-Mex filter of this record.

I’ll stop talking about it. You should just listen.

Eric’s band, Fruit Bats, recently released a fine record of their own, The Ruminant Band and it is conveniently located HERE for your listening pleasure. for you to check out!

Look to our semi-regular feature, For the Record, for reflections from staff and Sub Pop artists on some of our favorite records from the Sub Pop catalog; each featured title is deeply discounted for the 48 hours following the posted review.