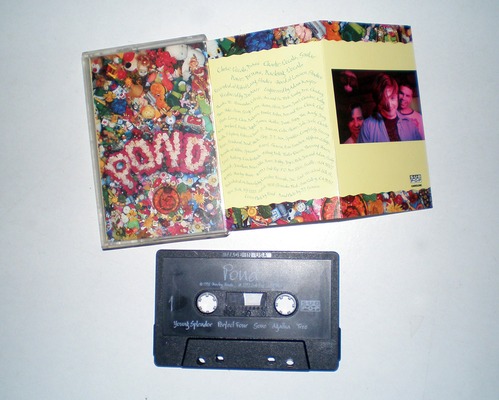 Obits are a 4-piece rock band from Brooklyn, NY who released their debut full-length album earlier this year. It’s called I Blame You and if it doesn’t wind up on your personal list of this year’s best albums, well, your list could use some fixin’. Scott Gursky is the band’s drummer and he’s also an amazing visual artist. He’s the one responsible for this and also this. Mr. Gursky is herewith also our second guest editor for an installment of our increasingly less unknown feature: “For the Record”! “For the Record,” of course, is our semi-regular web feature wherein we (or people who we convince to do so) rhapsodize on something from the (let’s be honest) checkered Sub Pop catalog and then, in a not even thinly veiled attempt to persuade you to take a chance and purchase the thing in question, deeply discount that album for a brief period of time.

And with that, we proudly present, Obits’ Scott Gursky on Pond…

Band: Pond
Record: Pond
When we told you the first time: February 1st, 1993

I first heard Pond around 1993 on MTV’s 120 minutes, a show I regularly relied on as a teenager to pick up hints of any “cool music” that would otherwise never find its way to my suburb. The video was for the song “Agatha”, and although the video wasn’t particularly interesting, the song definitely scared me. Guitarist Charlie Cambell drones on and on with one eerie chord, everything sparse and stripped down, with mantra-like vocal harmonies. To this day, I don’t have any idea what they are singing about, but I like to imagine this song is about a haunted house.

I bought their album Pond on cassette and wore it thin. I came to really appreciate (and even tried to emulate) Dave Triebwasser’s strong and steady drumming, and I was fascinated by bassist Chris Brady ‘s pop sensibilities butting up against the darker moods that Cambell and his guitar seemed to contribute. When at their best, during songs like “Gone” and “Spots”, they came across really murky and drone-y, a bit unhinged and heavy, but never without a strong hook to keep the foot tapping. It was distorted, heavy pop-rock music, lots of bands were doing it. But this trio had a certain way mixing the minor key with just enough melody and energy to keep it fun, and this separated them from the pack. When I was lucky enough to catch them live in Philadelphia, they had small amps, and Dave pounded a frankenstein of old drum kit orphans, very cool. There was something scrappy about this band, something that told you they didn’t have lots of money, they practiced in a damp basement, that they made weird, spooky power-pop because they really loved doing it and that was enough. The cynics will say Pond never made exceptional music, left no superstar legacy and that this record is (mostly) forgotten on the shelf, just another product of its time. Yet for me this time is a nostalgic one, one of cassettes and self-discovery, when against the odds you found special records, and special records found you.