News for The Postal Service

Mere months after its unforeseeably really, pretty great first season earlier this year, and in response to largely precedented levels of demand for more, the Sub Pop Podcast will return for a 10-episode second season on Wednesday, October 12th. Season Two of the Sub Pop Podcast will run weekly from October 12th through December 14th and will be available through all finer podcast distribution points.

Produced and hosted by real-life Sub Pop employees Alissa Atkins and Arwen Nicks at the label’s Seattle headquarters, the Sub Pop Podcast, of course, is where you can hear stories from inside, outside, and adjacent to Sub Pop, Seattle’s premier medium-sized record label. We focus on conversations with our artists, people who work at/with/around Sub Pop, and anyone else willing or reckless enough to talk to us. And same goes for our sibling label Hardly Art. We will continue to include, impose on, sponge off, and otherwise implicate them, as well.

In its conspicuously excellent debut season, from January 10th of this year, through to April 1st, we managed to produce and then release 11 (which, for some reason, we called 10 ½…) episodes of Sub Pop’s very first podcast. And then, between April 1 and now, we put out an additional two, interstitial, summer episodes in an effort to sustain the arguably ravenous interest of our dozens upon dozens of regular listeners. We spoke with principal members of Band of Horses, Mass Gothic, Chastity Belt, Mudhoney, Shearwater, S, King Tuff, and a whole bunch more. And, we were recognized with an Honorable Mention in the Seattle Weekly’s 2016 Readers’ Poll for local, music-based podcasts which currently exist! This sort of intoxicating recognition has us gunning for at least second runner-up next year. The entirety of this first season, and our summer episodes remain available everywhere now.

In the upcoming second season, unrelated to any outstanding debts or lost bets, we managed to convince an impressive array of folks to talk with us. Here we are referring to such celebrated figures from the wide world of entertainment as: Alex and Victoria from Beach House, Sam Beam from Iron and Wine, Tad from TAD, Benjamin Gibbard from both Death Cab for Cutie and The Postal Service, Kathleen Hanna, Father John Misty, Jonah Ray, members of CSS and Clipping, our boss and benefactor Jonathan Poneman (More than once! He’s the boss!), plus, reliably, “more.” We also took the Sub Pop Podcast on the road, with trips to both Poland and Portland, and down to the Sub Pop store at Sea-Tac Airport.

In the spirit of tell and show, you can listen to a trailer for the Sub Pop Podcast, Season Two (and, again, every previous episode) at subpop.fm RIGHT NOW. If you like what you hear, you can subscribe (in iTunes or anything) right now, too. The first episode of the new season will be available Wednesday, October 12, and new episodes will be delivered weekly until December 14, 2016.

Right on the heels of their inside look at the sounds of Washed Out, the good folks at The Creators Project created what we think is a pretty damn wonderful documentary about our own Postal Service. Take a few minutes and watch the band wax nostalgic about the creation of their now legendary record,Give Up, you’ll probably feel pretty good afterward—these songs have that effect. This record means an awful lot to us, and it means even more that it seems to mean so much to so many other people, too—The Creators Project included.

Hey, there! We’re excited to share the brand new video from The Postal Service for their new song, “A Tattered Line of String”! Available on Give Up (Deluxe, 10th Anniversary Edition). 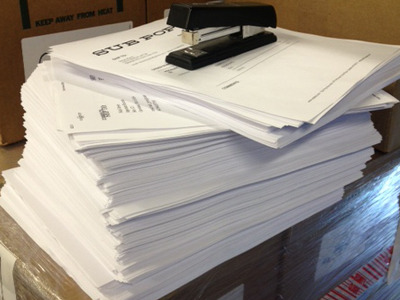 …we sincerely apologize. The accompanying photo to this post is a stack of orders for The Postal Service’s 10th Anniversary Deluxe Edition of Give Up, and if you are at all familiar with the thickness of a piece of paper, you’ll no doubt understand that that is a lot of pieces of paper! If you are one of the many people who placed an order with us recently, what this means is that there is a good chance that it’s going to take a few extra days to arrive at your designated arrival zone. We apologize for any and all inconveniences associated with this recent glut of orders. Rest assured, we have many extra hands in the warehouse working toward getting our shipping times back to their mostly satisfactory to remarkable times. Thanks so much for your (ongoing) patience with us.

The Postal Service are back in 2013 with a reissue of their now classic album, Give Up, featuring 15 bonus tracks, including two brand new ones, as well as an extensive tour.

Watch this recently unearthed video showing the fateful day in the early aughts when Jimmy met Ben and the magic that would become Give Up began to blossom.

Pre-order Give Up: The Deluxe 10th Anniversary Edition from Sub Pop now and receive the limited, colored-vinyl Loser Edition. These are available over at The Postal Service’s own site and will be available at select independent retailers on April 9th, call your local record store for availability. 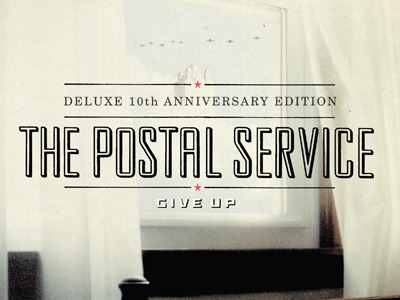 It’s been a difficult task to try and wrap our collective head around the fact that it’s been a full decade since The Postal Service’s game-changing, and much to the chagrin of seemingly everyone, only record was released. A lot has changed since February of 2003 (including the fact that Give Up recently went platinum!), but one thing that’s remained constant, is how truly remarkable The Postal Service record, Give Up, is. That is certainly not lost on us, which is why Sub Pop is releasing a deluxe, 10th anniversary reissue of Give Up on April 9th. The deluxe version will feature 15 bonus tracks, including two brand new Postal Service songs, “Turn Around” and “A Tattered Line of String” (available here right now!). If there was ever record that deserved getting all deluxed up, it is most certainly this.

If you pre-order the 10th Anniversary Edition of Give Up from SubPop.com, you’ll receive a limited-edition Postal Service postcard set. We’re also giving people who pre-order the 3xLP vinyl version of the album the multi-colored, limited Loser Edition of Give Up. We’re also giving people who pre-order Give Up an instant download to the new song, “A Tattered Line of String”. And a note on limited-edition things: you’ve got to act quick to get yours.

Pre-order Give Up Deluxe 10th Anniversary and claim your postcards and Loser Edition LP.

Speaking of a tattered line of string, that decade-old Postal Service shirt you’ve been rocking is probably getting a little threadbare by now—not that you still don’t look good in it—it may just be time to re-up on your PS gear. We have two brand new Postal Service t-shirt designs to solve that problem. Here and here.

The Postal Service will also be setting out on a 10th anniversary tour with Ben Gibbard and Jimmy Tamberello as well as Jenny Lewis (Rilo Kiley, Jenny & Johnny). For ticketing and additional show info, click here.