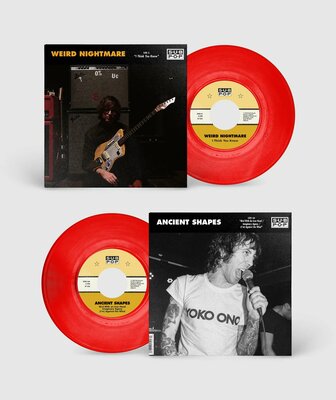 Today, the unholy union of Weird Nightmare and Ancient Shapes brings you the double A-Side experience of the year! “I Think You Know” w/ “Bird With an Iron Head” delivers two sides of sing-along power-punk you need to hear to believe.

This pairing is now available in physical form on a bright red 7”colored vinyl single. Featuring  Weird Nightmare’s “I Think You Know” on side A, and Ancient Shapes’ 3-part suite “Bird With an Iron Head” (+official video), ”Imaginary Agony” and “I’m Against the Wind” on side AA. All four songs are also available digitally on all DSPs from Sub Pop.

Weird Nightmare and Ancient Shapes have a handful of upcoming Canadian release shows for the new single, as covered below. And Weird Nightmare will also be the main support for select Archers of Loaf east coast shows beginning Tuesday, November 29th in Baltimore at Ottobar and ending Friday, December 2nd in Brooklyn at Warsaw. Please find a complete list of Weird Nightmare shows below.

Weird Nightmare’s self-titled full-length debut is available now on CD/LP/CS/DSPs from Sub Pop. The LP’s limited Loser Edition on transparent cotton candy swirl vinyl, packaged in a special embossed jacket with semi-transparent obi-strip along the spine, can be purchased from megamart.sub pop.com, select independent retailers in North America, and at Weird Nightmare live shows. In the UK, and in EU, the Loser Edition is available on coke bottle clear vinyl (both while supplies last).

Ancient Shapes was spawned in 2015 as a recording side project of Daniel Romano. Here’s Weird Nightmare’s Alex Edkins on Daniel Romano, “I think Daniel is a real treasure and a severely underappreciated genius. He released 11 albums last year! I’m quite tickled to be sharing a release with him.”