Quasi (aka Sam Coomes and Janet Weiss) will release Breaking the Balls of History, their awesome new Sub Pop debut and frontrunner for our favorite album title ever, worldwide on February 10th, 2023. The twelve-track effort was produced by the duo and John Goodmanson (Sleater-Kinney, Bikini Kill, Unwound, Treepeople, Team Dresch) at Rob Lang Studios in Seattle, engineered and mixed by Goodmanson, and mastered by Bill Skibbe at Third Man Mastering.

Quasi’s Breaking the Balls of History will be available on CD/LP/CS/DSPs and can be preordered now from Sub Pop. LP preorders from megamart.subpop.com and select independent retailers in North America, the UK, and Europe will receive the limited Loser edition on pink vinyl.

Quasi is also announcing a headlining U.S. tour to support Breaking the Balls of History which begins Friday, February 10th in Boise, ID at Neurolux and currently ends Tuesday, March 28th in Pittsburgh, PA at Club Cafe. Tickets for these shows go on sale Friday, October 28th. Preceding these dates, Quasi will headline a show in London, UK on December 7th, 2022 at The Victoria. Please find a complete list of dates below.

Breaking the Balls of History is Quasi’s tenth record, landing ten years after their last record, on February tenth. Three tens, which aligns with the thirty years they’ve played together. Sam Coomes and Janet Weiss have become Pacific Northwest icons, and Quasi has always felt so steadfast— their enduring friendship so generative, their energy infinite, each album more raucous and catchy and ferocious and funny than the last. But we were wrong to ever take Quasi for granted. For a while, they thought 2013’s intricate Mole City might be their last record. They’d go out on a great one and move on.

Then in August 2019 a car smashed into Janet’s and broke both legs and her collarbone. Then a deadly virus collided with all of us, and no one knew when or if live music as we knew it—the touring, the communal crowds, the sonic church of the dark club—would ever happen again. “There’s no investing in the future anymore,” Janet realized. “The future is now. Do it now if you want to do it. Don’t put it off. All those things you only realize when it’s almost too late. It could be gone in a second.”

Under lockdown, Portland’s streets fell still, airplanes vanished, wildlife emerged. And with the obliterated normal came an unexpected gift: uninterrupted time, hours every day, to make art. Quasi couldn’t go on the road, so they got an idea: they would act as if they were on tour and play together every single day. Each afternoon, Sam and Janet bunkered down in their tiny practice space and channeled the bewilderment and absurdity of this alien new world into songs. Janet’s strength returned and rose to athlete-level stamina. “When you’re younger and in a band, you make records because that’s what you do,” Sam said. “But this time, the whole thing felt purposeful in a way that was unique to the circumstances.” They knew they would keep it to just the two of them playing together in a room. They knew they’d record the songs live and together, to capture a moment.

The incredible result of those sessions is Breaking the Balls of History, recorded in five days and produced by John Goodmanson at the legendary Robert Lang Studios in Shoreline, WA. Here are two artists at their prime, each a human library of musical knowledge and experience, entirely distinctive in their songcraft and sound. In Quasi-form, the band becomes alchemically even greater than the sum of its parts: Janet’s galloping drums and Sam’s punk-symphonic Rocksichord and their intertwining vocals make something gigantic, anthemic. In the thick of a cataclysmic social and political moment, they’ve crafted exquisitely melodic songs that glitter with rage and wild humor and intelligence, driven by a big bruised pounding heart.

“A last long laugh at the edge of death” sings Sam at the album’s outset, and that gleeful defiance—which might as well be the logline of our present moment—sets the table for the songs to come. In “Gravity,” Quasi’s predilection for the absurd now tips into unnerving realism; in the post-facts era, the very thing that tethers us all to the earth is rendered meaningless (“you can walk on water if you so choose in your made-in-USA concrete shoes.”) Punchy warning verses about death and disarray swoon into the blissed-out, checked-out chorus of “Queen of Ears” (“But I, I float above it all, wizard of idleness, mistress of killing time.”) Janet’s voice floats sweet and eerie through the atmospheric suspended reality of “Inbetweenness.” Etch “Doomscrollers” onto the golden record and launch it into space as a precise time capsule of the incomprehensible present. “The Losers Win” is a tart arsenic nightcap to close out the record, and hell, the nation.

It sounds dark, and because it’s rising to the moment, it is. But this is also a record surging with energy and pleasure and joy. “It felt so life-affirming. I can hear in the music how happy I am to be there and to be playing at that level again,” Janet said. “I get to exist.”

I’ve been listening to this record for a few months now, and I can’t stop thinking about how as the world started to end, and then kept on ending in all kinds of surprising new ways, Sam and Janet returned to their practice space every day and made songs. Face to face, instrument to instrument, they decided to build something new. They did the work. They made their art. They’ve lived through enough to understand that nothing is permanent, and that when your faith in humanity sinks, you turn to the life force of what you can rely on: the people you trust, the community that claims you, and what you can create. You can’t control the time. But you can make a record of a time. And luckily for us, Quasi has again. 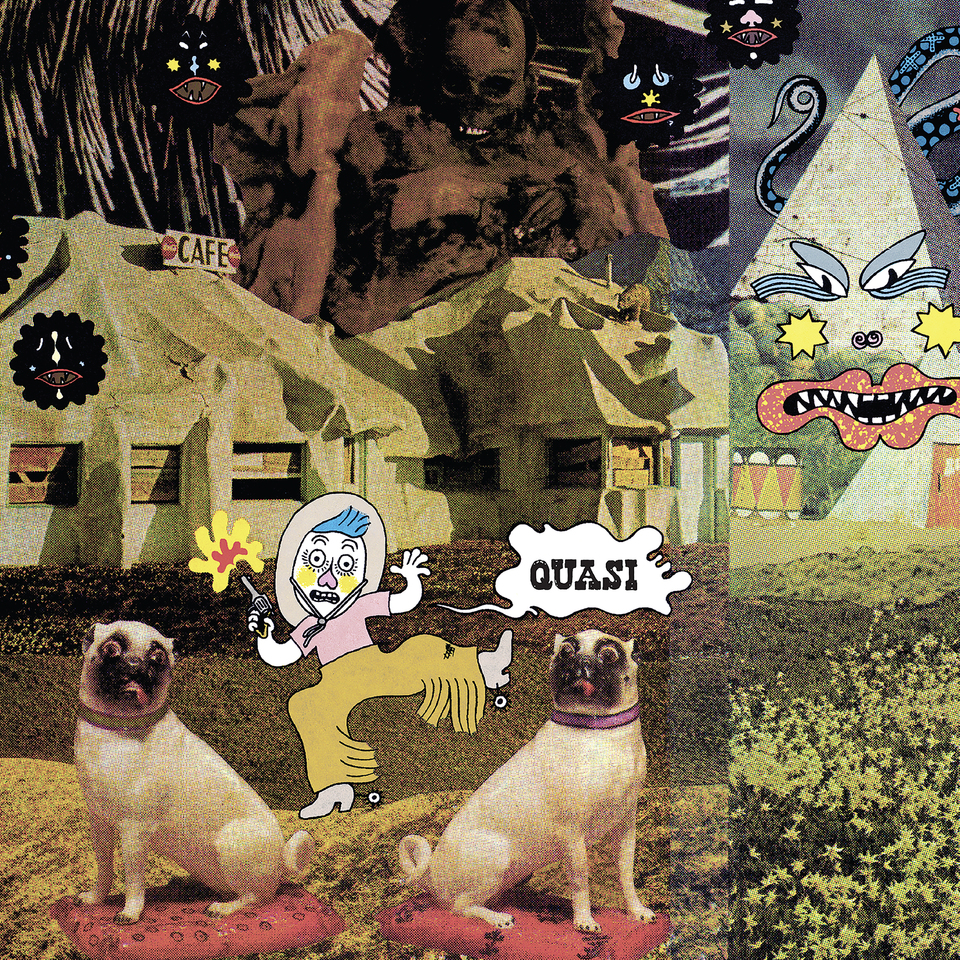 Quasi
Breaking the Balls of History