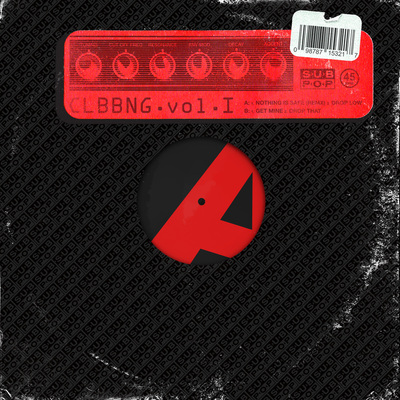 Today, Friday, July 22nd marks the release of Clipping’s CLBBNG Vol. 1, the first collection of remixes produced by the group, which is available worldwide on all DSPs from Sub Pop.

CLBBNG features four remixes including “Nothing Is Safe,” from There Existed An Addiction To Blood, the group’s horrorcore album of 2019, which has a dance remix, and an instrumental rework (titled “Drop Low”); Meanwhile, remixes of “Get Up” (titled “Get Mine”), and “Dominoes” (titled “Drop That”) from CLPPNG, the group’s Sub Pop debut of 2014, round out the tracklisting.

Clipping has wanted to make a record of dance remixes for some time, and inspiration struck when they performed what has to be the all time tiniest desk concert (see for yourself!) for NPR Music’s Tiny Desk Concert. Jonathan Snipes elaborated further, “I had come up with the name CLBBNG mostly as a joke when we made the first album for Sub Pop (titled CLPPNG). I made a couple of remixes back then (none of the tracks released in this volume), but some combination of losing interest and getting distracted by other projects meant that we didn’t release them at the time. When we recorded drums with Chukwudi Hodge for “Say the Name” in 2019, we also had him play a four-on-the-floor disco beat over the top of the “Nothing is Safe” instrumental with the idea that someday we’d make a sprawling dark-disco Moroder-esque version of the song. When we were asked to do “Tiny Desk” I thought maybe it was the time to finally make that track. Soon after we were asked to do another virtual performance inside Minecraft, and I thought it would be fun to make more dance remixes and create an entire “CLBBNG” club/rave set. It’s versions of these edits and remixes that have made it on to this, the first CLBBNG EP. I have a deep love and appreciation for dance music, and I relish any excuse to make it myself. It’s a lot of fun to bring those sensibilities to clipping songs, and I’m excited to continue making CLBBNG releases in the future.”

Additionally, four of Clipping’s songs, including the “Nothing Is Safe” remix, are being featured on a new app developed with Modify Music which also launches today on iOS and Android app stores. This is a real time mixing app, that has each song separated into four “stems” that can be mixed on the fly. Alongside the original stems, the listener will have the option to switch out and mix in alternative stems that Jonathan Snipes produced just for the app. The app can be found here: https://modifymusic.com/artists/clipping/

Clipping will kick-off its first round of international touring for the fall of 2022, with a short run of shows in the UK and EU beginning on Wednesday, September 21st in Glasgow at SWG3 Warehouse and ending Sunday, September 25th in Brussels at Atelier. Following those shows, Clipping will return to the states for an appearance at Southern California’s Desert Daze Festival Friday, September 30th through Sunday, October 2nd (performance date TBA)