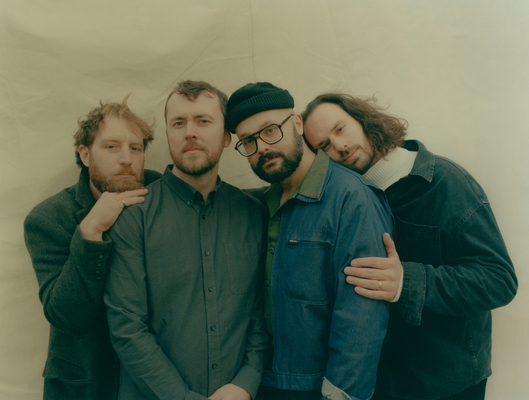 TV Priest’s My Other People, the group’s acclaimed new album and follow up to Uppers, is out now worldwide on Sub Pop. The album features the standouts  “One Easy Thing”, “It Was Beautiful,” “It Was A Gift,” “Bury Me In My Shoes,” and “Limehouse Cut”, was produced by band member/multi-instrumentalist Nic Bueth at Studio East in London. At radio this week, My Other People is currently no. 6 on the NACC 200 College chart, after three weeks on the chart.

TV Priest’s first-ever live shows in North America will begin next Tuesday, July 26th in Brooklyn, NY at Baby’s All Right, and end Sunday, August 7th in Seattle at Clock-Out Lounge. This run of dates will include stops in Philadelphia (PA), Montreal (QC), Toronto (ON), Chicago (IL), Vancouver (BC), and a festival appearance at Pickathon in Happy Valley, Oregon August 4th-5th, 2022. For up to date information on the band’s international touring schedule, please visit TV Priest.com.


TV Priest has also scheduled a live session with 90.3 KEXP in Seattle on Tuesday, August 9th at 9 am PT/Noon ET.
At radio this week, My Other People is currently no. 6 on the NACC 200 College chart, after three weeks on the chart.

My Other People is available worldwide on CD/LP/CS/All DSPs from Sub Pop. LPs purchased through megamart.subpop.com, select independent retailers in North America, and the band’s live shows will receive the opaque pink w/ white smoke vinyl version (while supplies last).

What People Are Saying About TV Priest:
“A record that exposes a new element of vulnerability that makes no sacrifice to their gritty, unshackled punk sound. TV Priest’s hearts are not just on their sleeves but served up on a platter for us to enjoy.” ★★★★ - DORK

“Flare-ups of vibrant noise… taut rhythms and brief but potent guitar flashes are occasionally reminiscent of Jon Spencer or J. Mascis. My Other People sees TV Priest continue to map out their own increasingly intriguing identity.” - Kerrang!

“Post-punk propulsion from the London four-piece, with a vocal like a prolonged howl of pain, rage and love.” - The Sunday Times

“The harsh, jagged guitar figures of Alex Sprogis and the heavyweight rhythm section of Nic Bueth (bass) and Ed Kelland (drums) once again create a wall of sound that vocalist Charlie Drinkwater plows through with his powerful voice and blank-verse lyrics, just as they did on their first long-player. That’s not all they can do, though, and My Other People sees the band adding additional levels to their game…They’re growing into a more accomplished and interesting band; their obvious talent makes them an act only a fool would ignore.” - All Music

“Dynamically, musically and sonically, everything hits harder and TV Priest show that they have clear staying power that transcends the current scene they come from.” - Birthday Cake For Breakfast

“This is an accomplished work that digs not from the catalogue of Joe Talbot, more Nick Cave, Jon Spencer and a small portion of The Smiths with the angst of the lyrics taking a bit of the old cantankerous Mark E Smith. All brewed in one pot they have created their own little gap and who am I to steal their glory of writing some seriously good angular post punk nuggets?” - Louder Than War

“There’s big band style vocals with a blue collar delivery, there are rhythmic structures and there’s an intense display of sonic brilliance. You can’t say TV Priest is just a post-punk or an indie rock band after listening to this album. They push the envelope while keeping it genuine to themselves and their audience. (8.5/10)” - Northern Transmissions

“On these new tracks, vocalist Charlie Drinkwater continues to resemble Joe Talbot, but I can just as easily hear Nick Cave, Jim Morrison, and Protomartyr’s Joe Casey in those bellows. His bandmates sound spry and adventurous, brimming with ideas and kinetic energy.” [“Bury Me In My Shoes”] - Stereogum

“The music has a real wielding tone throughout buzzing guitars and yelled vocals offering itself up with plenty of on the side feels.” [“Bury Me In My Shoes”] - Closed Captioned

“Frontman Charlie Drinkwater makes a startling statement. “I’m going to take these clothes off now,” he sings, offering up an image that seems to reveal the very core of this stunning new offering.” [“One Easy Thing”] - Far Out

“Charlie Drinkwater’s vulnerable side comes to the fore in ‘One Easy Thing’, with a voice that lends itself as capably to emotive ballads as it does to hook-heavy punk” [“One Easy Thing”] - Riot Mag

“Thoughtful and metronomic in equal measure, the plucking guitar chords at the forefront of the sonics with a mesmeric rhythm which is almost hypnotic in its delivery.” - [“Limehouse Cut”] -Backseat Mafia

“Stark and sinister, this track is a Nick Cave-esque lament on urban displacement and a longing for beautiful landscapes.” - [“Limehouse Cut”] - The Times