Sub Pop announced today the digital release of Shaina Shepherd’s cover of “Never Be Another You” on all DSPs with proceeds benefiting Seattle-based Africatown Community Land Trust.

The song is the result of a collaboration between Nordstrom and Sub Pop that expands support for local and emerging musicians and the nonprofit community organizations that inspire them and help them thrive.

In its inaugural year, this partnership showcases Seattle-based musician Shaina Shepherd who covers the song “Never Be Another You” by Lee Fields and The Expressions. The song is prominently featured in Nordstrom’s 2021 holiday campaign and can be seen and heard here. Shaina Shepherd is slated to perform this and other songs live on KEXP’s Sessions at 9:30 am on November 22.

Sub Pop CEO, Megan Jasper describes the song, “Shaina’s rendition of this song is perfectly attuned to the season and year, and I think it’s emblematic of what it feels like to be seen and celebrated both for our uniqueness and our connection to others.”  Jasper adds, “What a thrill to join forces with Nordstrom to champion the amazing local artists and organizations that lift up our community.”

Nordstrom President and Chief Brand Officer, Pete Nordstrom adds, “We are thrilled with how the song turned out and how it’s the perfect fit for Nordstrom’s Closer To You campaign.  Shaina and this group of fantastic Seattle musicians really came together in the spirit of art, and community.  Seattle has a very rich musical legacy and we are excited we were able to engage the talent in our own community to give the song an authentic feel. It became a very-Seattle community moment when Megan and the fine folks at Sub Pop decided they wanted to release it as a single.”

Shaina Shepherd describes the project from her perspective, “I am so deeply honored to be part of this project highlighting not only the incredibly supportive and influential Seattle music community but the power of music to inspire togetherness and global impact. Seattle is my home and the Central District is my village. As I have grown and evolved as a person and an artist, it is the commitment of organizers and community activists that have shaped and inspired my art. It feels like a full circle to have my voice contribute to the collaboration between one of Seattle’s most influential companies, Seattle’s most historic record label and a Seattle organization dedicated to retaining the unique cultural landscape that has helped foster my music. This song fully captures the spirit of giving and the power of the human spirit that when activated can help people utilize their own joy to change the world around them.”

Proceeds from the sale of the digital single will benefit Seattle-based Africatown Community Land Trust, a non-profit organization selected by Shaina. The people of Africatown Community Land Trust are working toward community ownership of land in Seattle’s Central District to support the cultural and economic thriving of people who are part of the African diaspora in the Greater Seattle region.

K. Wyking Garrett, President and CEO of Africatown Community Land Trust (ACLT), describes the importance of donations to the organization, “ACLT is working to not only create affordable and livable spaces for Seattle residents but to also maintain space for artists to live and create. We are thrilled that Shaina chose our organization to benefit from the proceeds of her collaboration with Nordstrom and Sup Pop. These funds will go towards further elevating our work to build a future that honors Seattle’s Black cultural legacy.“

Shaina’s cover of  “Never Be Another You” came to be when Pete Nordstrom (Nordstrom President and Chief Brand Officer, ) asked Ben London (Executive Director of Black Fret, a non-profit that supports the creation and performance of new music in Seattle and Austin) to assist him in identifying and recording a signature song as part of a Nordstrom sonic branding effort.

London explains, “We were about a year into the pandemic at that point and the music industry was decimated. It was also an incredibly turbulent time on many fronts. Pete was looking ahead to a moment when people could connect and celebrate again and he wanted a song that sounded like how that might feel. After a few months of creative back and forth, the song ‘Never Be Another You’ was selected and I suggested they hire Seattle-based musician Shaina Shepherd – a 2020 Black Fret grant recipient – to cover it.” The song was recorded with a host of other Seattle-area musicians shortly thereafter at ExEx Studio and Avast Recording Co in Seattle.

Pete Nordstrom shared the recording with friend and SmooCH benefit collaborator, Megan Jasper, CEO of Sub Pop Records who suggested they release it as a digital single with proceeds going to a non-profit of Shaina’s choice.  The two then worked together to combine their collective resources to shine-a-light on Shaina in support of her musical goals and the project evolved from there.

Shaina Shepherd Bio
Shaina is a Seattle-based musician and vocalist whose dynamic range features the raw power of rock, the richness of soul, and the tender introspection of American folk. Shaina grew up around gospel music and not much else. She would watch her mother sing with the church choir and emulate the steady richness of her tone. Her passion for vocal technique led her to both opera and musical theater which she later studied at New York University. After graduation, she was immersed as an administrator in the symphony world where she worked closely with classical musicians before eventually finding her own sound as a singer-songwriter in Seattle. In 2017, Shaina added piano to her repertoire.

Shaina has participated in numerous collaborations over the past year with a host of legendary Seattle icons including Nancy Wilson of Heart, Duff McKagan of Guns N’ Roses, Kim Thayil and Matt Cameron of Soundgarden + Pearl Jam, and Mike McCready of Pearl Jam.

When she’s not performing, Shaina finds fulfillment in her work as a choir director, vocal coach and event producer in the Seattle music scene. She previously served as frontwoman to soul-grunge act BearAxe. 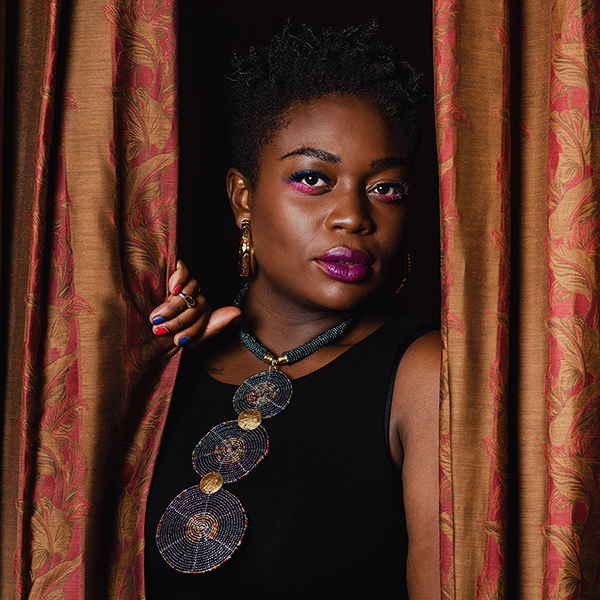