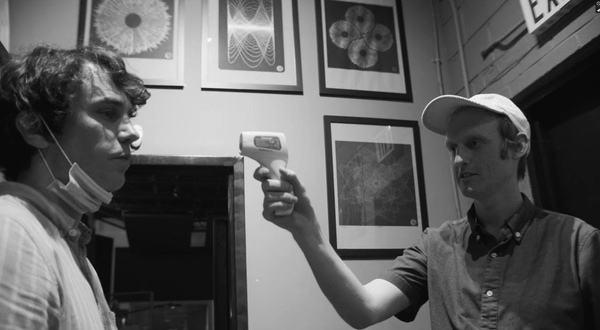 No Trace Evidence is a short mini-documentary of Kiwi Jr’s recording process during the Summer of Covid 19, a candid peak into the recording studio as well as al fresco out-door mixing, isolation booths, temperature checks and black cats crossing their path.

Self-released internationally in January 2020, Kiwi Jr.’s Football Money was a critical smash, earning 4 and 5 star rave reviews.  Primed for the buzz of a UK tour, festivals and SxSW, Covid 19 pulled the carpet out from under the bands’ plans.  But just as suddenly, out of the blue, a record offer arrived via email from Sub Pop Records who had not yet seen, met or spoken to the band.

Pandemic-be-damned, Kiwi Jr. recorded their second album Cooler Returns in July, and full-speed ahead, released the first single in September and the album in January 2021, again to critical accolades and the praise of indie rock connoisseurs.

With Toronto in and out of lock-downs, slow vaccine rollout and the finger-pointing of Ontario Pandemic Politics, the band wonder will they ever tour?

Beginning on September 10th, Kiwi Jr will embark on a 9+ dates EU tour, with live performances at this year’s Waves Festival and additional shows in Vienna, Amsterdam, Manchester, London, Paris and Luxembourg (See below for full list of dates.)