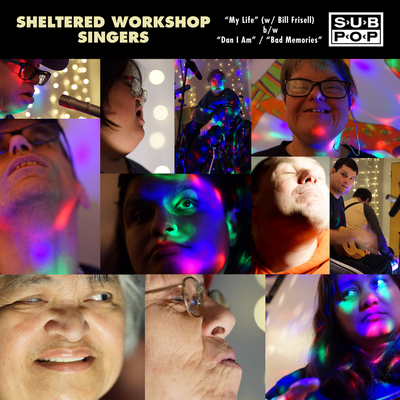 Sub Pop is pleased to announce the new single by Sheltered Workshop Singers, “My Life” (Featuring Bill Frisell) b/w “Dan I Am” and “Bad Memories,” available today worldwide through all digital music services. The release coincides with World Down Syndrome Day, Sunday, March 21st, 2021. The 7” version of the single will be released later this year as part of the subscription-only Sub Pop Singles Club Vol. 6.

Jazz great Bill Frisell (13-time DownBeat Magazine “Guitarist of the Year ” winner) guests on “My  Life,” adding an elegiac and gentle layer to vocalist Grace’s intricate melodies and epic emotional investment. Brennan states, “Frisell is such an empathic musician. I can’t think of a more perfect fit for the Sheltered Workshop Singers.”

All tracks are available now on all digital music services. Fans can get the limited-edition 7” single and many other excellent records by subscribing to the Sub Pop Singles Club Vol. 6.