World’s Most Stressed Out Gardener, the majestic new album from multimedia auteur Chad VanGaalen, is available today on CD/LP/DSPs worldwide through Sub Pop and in Canada from Flemish Eye. In celebration of this release, VanGaalen has created a video for the single “Starlight.” The song is a “celebration of our cosmic origins” shares VanGaalen, who fused old Super 8 footage of his family from the ’50s and ’60s, circular photos that were taken in his studio, and quick sketches to stylistically create a visual fusion unique to VanGaalen’s body of work.

On Thursday, April 8th, VanGaalen has scheduled a live stream performance from his Yoko Eno studio that will be broadcast through NoonChorus. The show will be available for viewing in North America, Europe, Asia, and Australia at 7 PM (local time). Viewers will see and hear things that VanGaalen has historically been unable to incorporate into his in-person live show experience – a heavily modified D-85 Electone organ, his prepared piano, various homemade instruments, and perhaps a shot or two of the skateboard ramp he built in his basement. Even more enticing? A psychedelic flute solo will be performed. Whatever the outcome, the show is guaranteed to be unforgettable. Ticket holders will be able to stream the performance for 5 days following and will also be able to buy merch. You can purchase tickets for this event here.

World’s Most Stressed Out Gardener LPs purchased through megamart.subpop.com, Flemish Eye (Canada), select independent retailers in North America, in the U.K, and in Europe will receive the album on orange-gold vinyl with blue/red trails (while supplies last). There is also a new T-shirt design available.

What people are saying about World’s Most Stressed Out Gardener:
“An expansion of VanGaalen’s cult audience is sorely overdue.” [8/10] - Uncut

“No idea is too strange and nearly anything can be used as a musical instrument… Is it incoherent? Absolutely, but that’s all part of the fun.” [8/10] - Exclaim

“A tour de force of all the things that make the Canadian singer-songwriter great, from the kaleidoscopic psychedelia of ‘Starlight’ to the hazy, laid back pop of the single ‘Samuari Sword’.” [8/10] - Loud & Quiet

“The Alberta-based genre jumper has been marching to the (slightly off) beat of his own drum for the last decade, and it’s always a pleasure to hear what he’s been brewing up in his bunker.“ - Monster Children

“Chad VanGaalen‘s mind must be cavernous, where behind every nook and corner a whimsical idea is being generated.” - The Revue 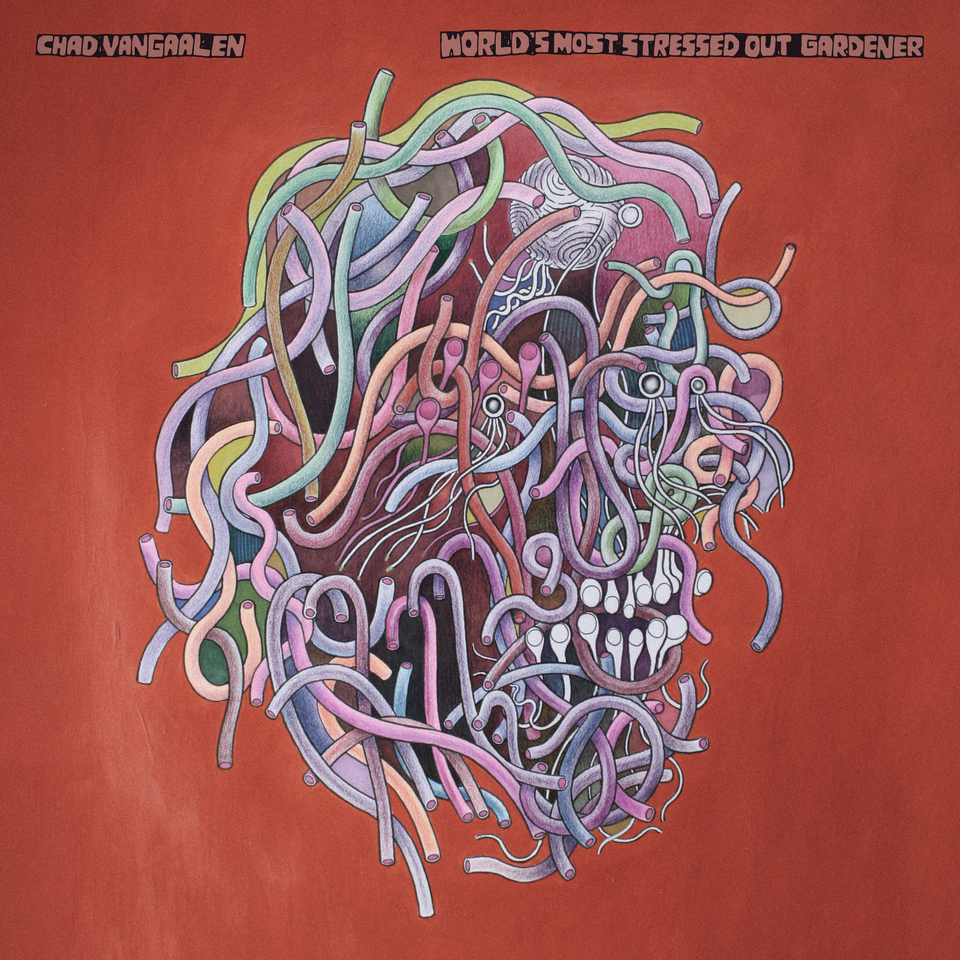