On April 23rd, 2021, Sub Pop will digitally release What Is Going On? the five-song debut EP of bedroom pop from singer, songwriter, and producer Hannah Jadagu (pron. juh-dah-goo). Today, she is sharing the official video for the EP’s title track, directed by Cameron Livesey (who directed her video for the single “Think Too Much”).

Hannah says of the video, “For the ‘Think Too Much’ video I collaborated with my friends to create a juxtaposition between the message of the song, in which I sing about anxieties and societal pressures, and the music video, which depicts my friends and I just enjoying New York. When thinking of ideas for the ‘What Is Going On?’ video, I was certain that I wanted to take a different approach. Originally, I just had a loose vision of a rooftop band scene and worked hard to make that happen. However, during the editing process, Cameron and I felt we were missing something. That something was a storyline. So, I decided to bring in actors Sarah Tie and Joseph McCain. Through their work, we were able to really bring the lyrics to life.”

Last month, Hannah released her single “Think Too Much,” which was warmly received by outlets like Jezebel who raved,  “An immediate charmer—dreamy melodies emboldened by a neurotic interiority—and maybe the greatest song about fearing turning 23 since Blink-182’s “What’s My Age Again?” Meanwhile, Alternative Press noted it for “dreamy synths and beats” and Brooklyn Vegan called it “A catchy dose of indie/dream pop that makes good on the promise of Hannah’s Soundcloud singles.”

Hailing from Mesquite, Texas and now residing in New York, the incredibly resourceful 18 year-old records and produces her music all through her iPhone 7. Using Garageband iOS, an iRig, microphone, and guitar, Hannah has found a process that has served her well so far in her young recording career. The songs on What Is Going On? encapsulate the thoughts, hopes, and fears of growing up as a young Black woman in the U.S. with themes of empowerment and a wise-beyond-her-years worldview weaved throughout.

“My Bones,” the powerful opening statement from What Is Going On?, holds great meaning for Hannah. “With the influx of media coverage of Black women going missing, being murdered, and the lack of care there is for Black women in general, both within this country and the world, I wanted to dedicate a song to it,” she says. “I kept the lyric brief, writing ‘You could take my bones and place them home, they won’t find out’ because I felt those words spoke enough to the situation.”

“Sundown” was the first song that helped Hannah realize that music could be a way to express what she was otherwise unable to articulate.“‘Sundown’ takes place when I was a junior in high school and I decided to write a song about how I was feeling at the time,” she says. “I was exhausted from schoolwork, extracurricular activities, college-prep, and overall life of being a pre-college teen. ‘Sundown’ was a way for me to express thoughts I’d kept to myself.” She continues, “Sonically, this song is layered with many different background vocals, uses of reverb, chorus and pitch shift. It’s very telling of the music I was consuming at the moment.”

“‘Think Too Much’ is the only song that I’d written with the intent of putting it on an EP,” Hannah says. “I was challenging myself to make a song that was high energy, fun, and a ‘bop.’ At the time, I remember listening to a lot of Dayglow, Jean Dawson, and Winnetka Bowling League, and thinking to myself, ‘These people are making such catchy and fun songs without even trying.’ Then I thought to myself, ‘You’re overthinking this.’ I asked all my friends what they thought about ‘too much,’ compiled their responses, chose some fun chords and rhythms inspired by Snail Mail and Phoenix, and went to work.”

The title track “What Is Going On?” was a rewrite of a past demo she had originally posted to Soundcloud. The song talks about the sort of confusion that comes with the infatuation you can have for someone. “It’s very much my only attempt at an anthem for teenage love,’’ laughs Hannah. “When I had originally posted the demo, people really loved it. However, there wasn’t much of a story to tell. So eventually I took it down until I had an experience that inspired me. I FaceTimed my sister about it, and she encouraged me to practically rewrite the whole song. In terms of the production side, I wanted to tap into the rockstar in me, heavily influenced by Clairo/Rostam, Deb Never, and Beabadoobee. This song was definitely my favorite to produce.”

“Bleep Bloop” was written during Hannah’s first semester of senior year. “I couldn’t seem to sleep one night, so I just grabbed my guitar and started singing/playing what came to mind. Most of the lyrics blossomed out of a singular freestyle without much premeditation,” she says. “The song both acknowledges and battles with the idea that we as young people are often expected to just ‘deal with it,’ and the lack of awareness for our mental health. While I feel that I am very privileged, I still think it’s okay to not feel good, and be able to talk about it. The production on this track is sort of an homage to Dijon’s ‘Nico’s Red Truck,’ a song I was super obsessed with at the time. I was also listening to a lot of SZA’s ‘20 Something’ and Frank Ocean.”

Hannah concludes, “What Is Going On? will always be special to me. It represents my first project, and it’s full of my thoughts and emotions during my own personal experiences, and also what was happening in the world. It truly is like seeing through my exterior, and getting to know me over the past few years, in just a matter of 30 minutes.”

What Is Going On? strikes us as pretty special, too. Same with Hannah. And all that is plainly obvious in just a matter of 30 minutes.

What people are saying about Hannah Jadagu:
“She does a great job of expressing a sense of being trapped in a loop of negative thoughts (“why does it feel like I’m digging a hole?”) while keeping the music light and breezy.” [“Think Too Much” / “20 Best Rock Songs Right Now”] - The FADER

“A colorful dose of sweet, soaring psych and folk seems to coalesce into its own new genre… “Think Too Much” is intimate, but feels like it was always meant to be shared not with a diary, but a full audience: Jadagu’s dazzling performance is underscored by haunting lyrics that delve into one’s inner demons, uncertainties, and self-doubts – and an ethereal, catchy chorus all about overcoming these obstacles.” - Atwood Magazine

“Will delight your ears and …will warm your heart.” [“Think Too Much”] - Closed Captioned

“The track spans just under 3 minutes long and it captures a rosy, youthful wonder. Jadagu’s dreamy vocals paired with the lo-fi instrumentation gives “Think Too Much” a light bedroom pop haze. There’s a feelgood nature to the track, especially with its jangly guitars and upbeat bounce.” [“Think Too Much”] - Abduction Radiation

“Invitingly-vernal and open-hearted…” [“Think Too Much”] - The Autumn Roses

“The near 3-minute track begins with melodic guitar strumming before light drums kick in and give the song the feeling of a great summer pop tune. As Jadagu’s soft, gorgeous voice swears “It’s all in your head,” backing vocals from a group falsetto choir bring the song’s energy to life even more. The video for “Think Too Much” was directed Cameron Livesey and features Jadagu and a group of friends wander through a city-scape of bridges, trains and streets, singing along to the positive tune.”  [“Think Too Much”] - MXDWN

“[A] brilliant letter of introduction…” [“Think Too Much”] -  Binaural 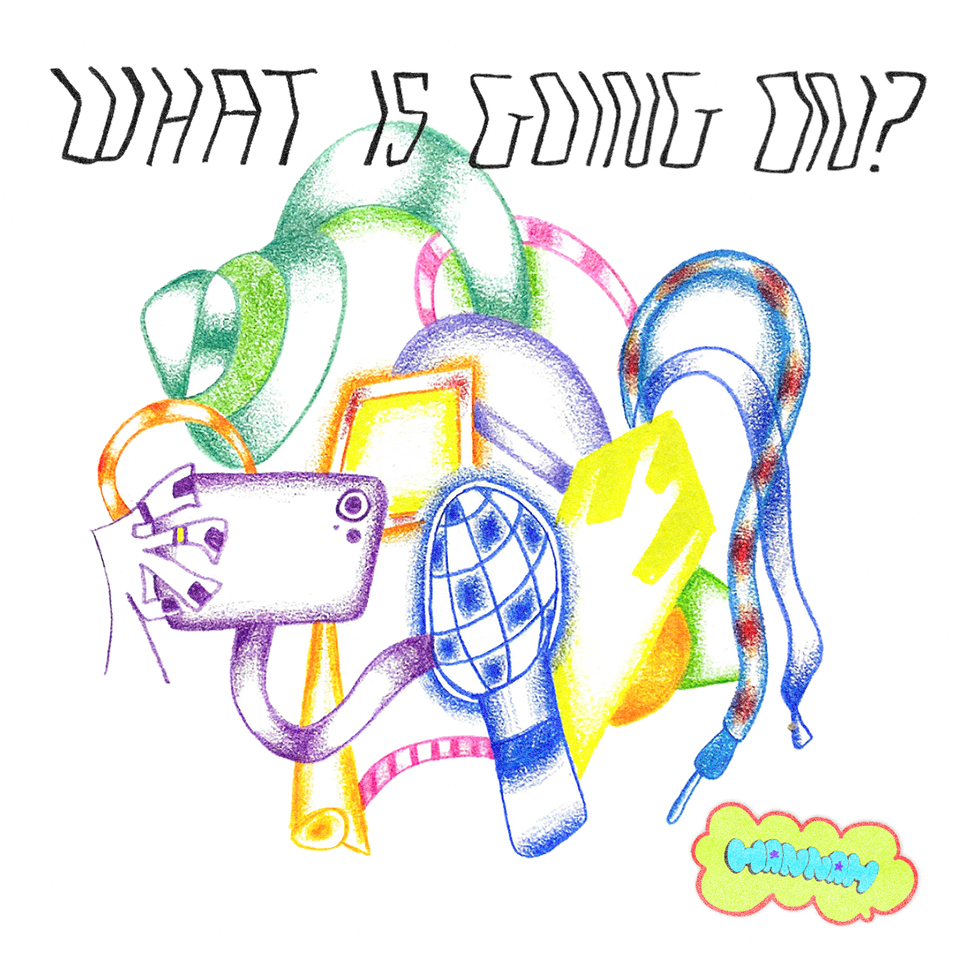 Hannah Jadagu
What Is Going On?