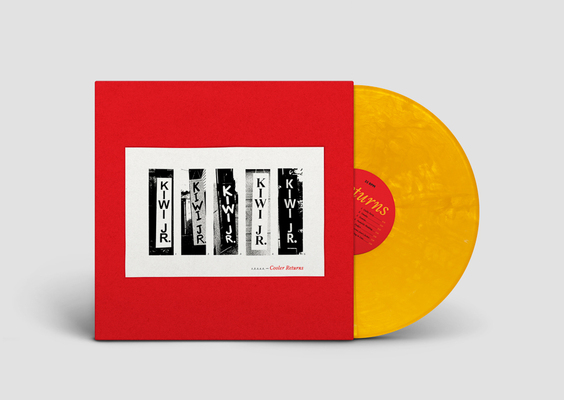 Toronto’s Kiwi Jr. Cooler Returns, the follow up to their acclaimed debut Football Money, is available now on CD/LP/CD/DSPs worldwide through Sub Pop, with the exception of Canada through the band’s Kiwi Club imprint. 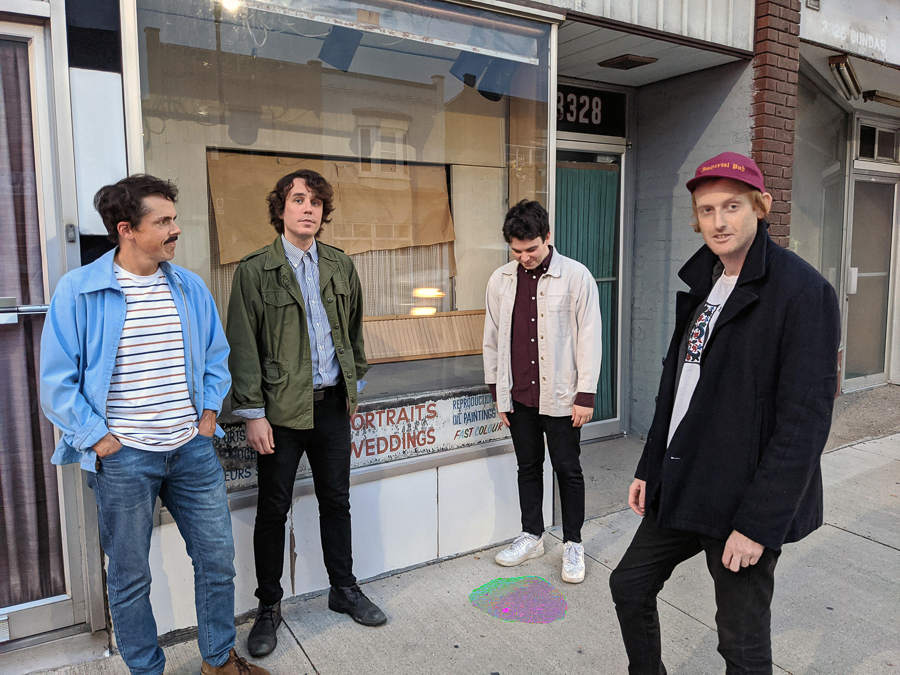 Buildings burning in every direction; macabre unknowns in your friendly neighbor’s basement; undecided voters sharpening their pencils: under pressure we could call Kiwi Jr.’s Cooler Returns “timely.” But what year is it, again? On their sophomoric smash-up released world-wide by Sub Pop Records, Kiwi Jr. cycle through the recent zigs & looming zags of the new decade, squinting anew at New Year’s parties forgotten and under-investigated small town diner fires, piecing together low-stakes conspiracy theories on what’s coming down the pike in 2021. Put together like a thousand-piece puzzle, assembled in flow state through the first dull stretch of quarantine, sanitized singer shuffling to sanitized studio by streetcar, masked like it’s the kind of work where getting recognized means getting killed, Cooler Returns materializes as a sprawling survey from the first few bites of the terrible twenties, an investigative exposé of recent history buried under the headlines & ancient kings buried under parking lots.

Not so long since their debut Football Money in archaeological time, unending gray eons later in the dog years of quaran-time, spiritually antipodean Canadians Kiwi Jr. return to disseminate this year’s annual report to the shareholders, burying the incriminating numbers in the endless appendices of a longform narrative record, a 3,000 word tract for stakeholders to pore over.

Cooler Returns - memories of Augusts past, unrepressed & transcribed fast - go down easier thanks to meaningful changes enacted in 2019’s KiwiCares Pledge: delivering on a promise to transition from Crunchy to Smooth by 2021, the caveman chug of Football Money has been steamed & pressed with the purifying air of a saloon piano - operated with bow-tie untied - and a spring green side-salad of tentatively up-tempo organ taps & freshly fluted harmonica.

A chronically detuned spin of the dial through swivel-chair distractions & WFH daydreams, an immersive ctrl-tab deluge cycling through popular listicle distractions like the unentombing of Richard III, or the deja vu destruction of the Glasgow School of Art, Kiwi Jr. sing this song to an indoor audience, crisscrossing canceled, every other prestige distraction source wrung dry, only songwriting remaining to deliver engrossing tales to the populace, just how I imagine it worked in the old days. Fixing loose ingredients into a sturdy whip, Kiwi Jr. beam in live from the 9-5, striding into 2021 with a mastered brainwave that comes equally from the back room of the record store as the penalty box. And how do we, left holding this box of deliberate entanglements, sign off to those as yet uninitiated, undecided, uncertain, unseen, absent return coordinates -  Best Wishes, Warm Regards, Good Luck? Cooler Returns, Cooler Returns, C o o l e r  R e t u r n s !

Kiwi Jr. Cooler Returns has seen praise from the likes of MOJO, who in its four-star review, raves, “sustaining momentum near-flawlessly across 13 songs…proves Kiwi Jr. have the skills to match their smarts.” Uncut says, “Canadian absurdists’ return is a lyrical delight”, DIY offers this, “The band rattle through a seemingly inexhaustible supply of hooks and melodies (4/5).”, and NARC proclaims, “Cooler Returns is a bloody good album full of vivid charm (4/5).”

“The latest glimpse into their 2021 debut album, “Undecided Voters” is an upbeat indie rock song filled with layers of social commentary woven under the seemingly random surface of the lyrics.” - PASTE 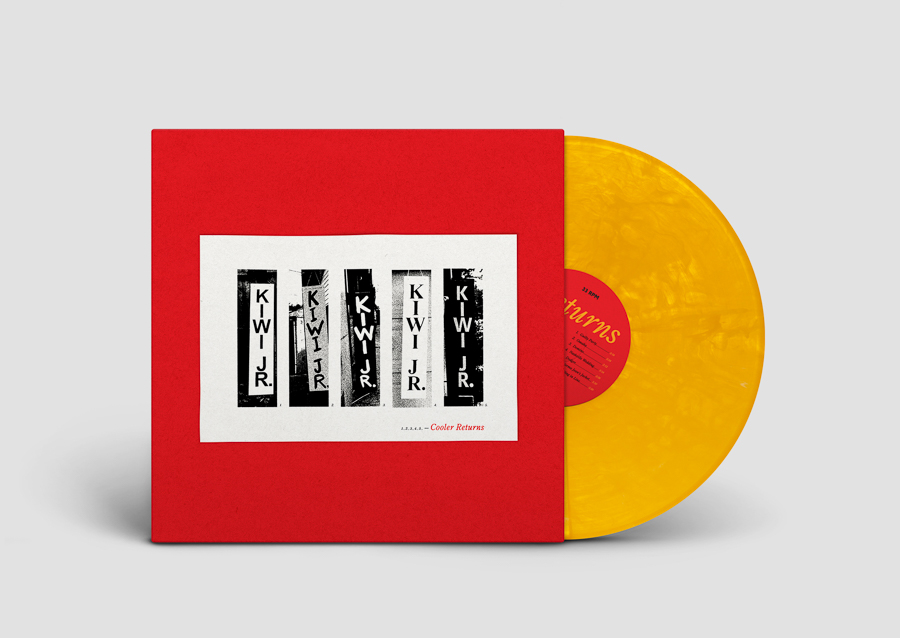 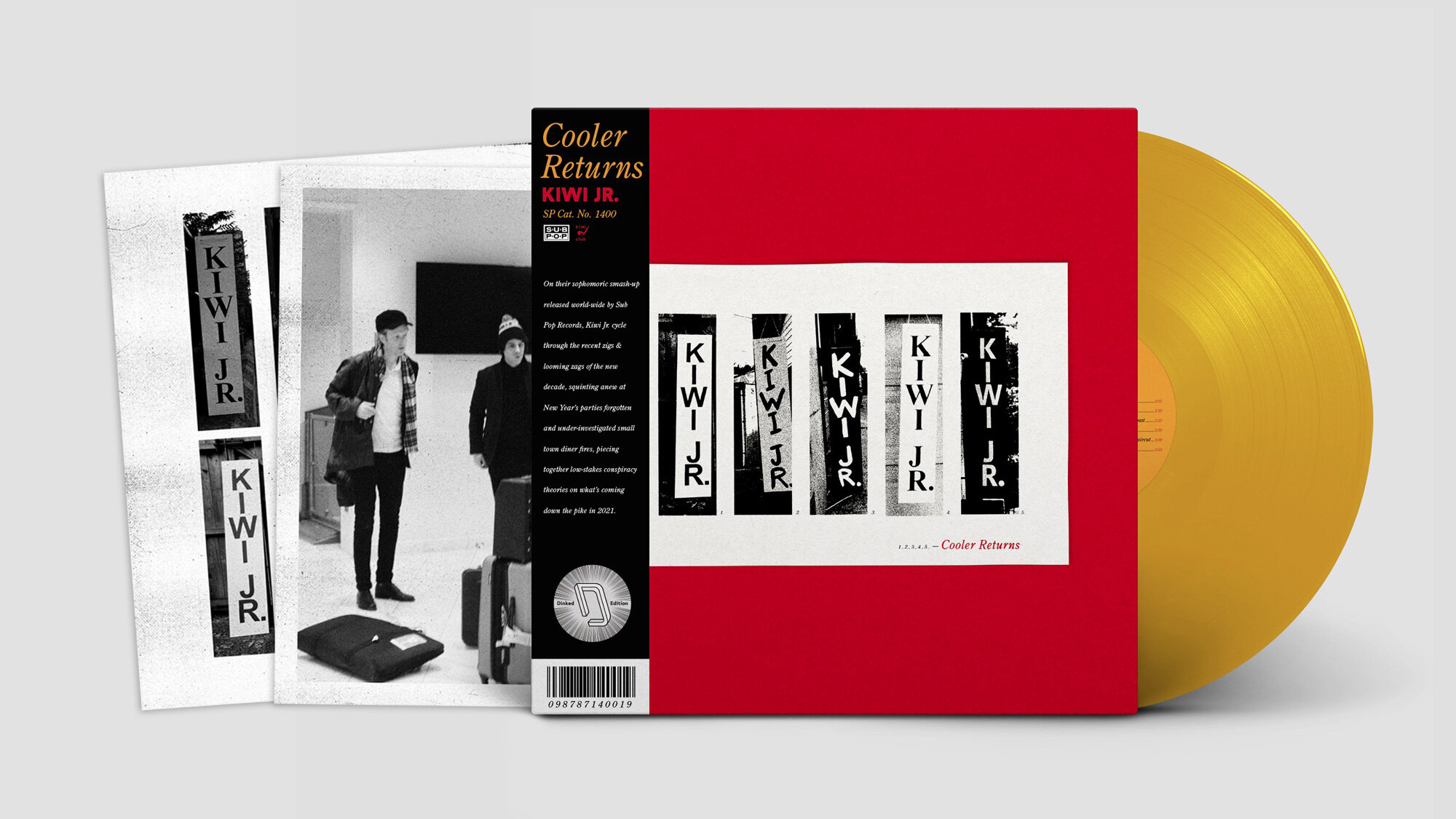 Cooler Returns is now available for preorder through Sub Pop. LP preorders from megamart.subpop.com and select independent retailers in the US will receive the limited Loser edition on translucent gold colored vinyl (while supplies last). Preorders through select independent retailers in the UK and Europe will receive the Loser on white colored vinyl (while supplies last).

There is an additional limited edition version of Cooler Returns from participating Dinked retailers in the UK that will be available on yellow colored vinyl with a signed print and a sequentially numbered obi strip (while supplies last).

“A jaunty rocker that immediately aligns them with Australian favourites (and now label-mates) Rolling Blackouts CF, “Undecided Voters” takes precisely 0.5 listens to get under your skin, being as it is so packed with vibrant guitars, propulsive percussion and ever-appearing earworm melodies…” - Beats Per Minute

“If their debut Football Money, which so gratifyingly warmed the sceptics within us with their comfortably layered hooks and dry sardonic perception of the metropolitan dream, was their run for local town mayor  – ‘Undecided Voters’ is their big money shot at the senatorship.” - So Young

“As we prepare for perhaps the most theatrical and gladiatorial political debate in history, ‘Undecided Voters’ is simultaneously extremely funny and painfully prescient.” - The Line of Best Fit

“The track channels a breezy 90s sort of indie rock anthem of sorts, that feels part slacker anthem and something much grander and anthemic at the very same time.” [“Cooler Returns”] - We All Want Someone To Shout For

“The four-piece’s refined pop sensibilities haven’t entirely escaped them in light of those cracks coming completely unglued early on in the track. If anything, they sound like a vehicle headed downhill without any brakes, momentum balling up, and a shit-eating grin worn on each of their faces approaching collision.” [“Cooler Returns”] - Recommended Listen

“On paper, the lyrics of Kiwi Jr.’s ‘Cooler Returns’ reads like a mildly anxious stream-of-consciousness that careens from an uncomfortable Super Bowl Sunday to being “strung out on the back of your ATV / throwing dead birds into the air”. But the song’s also a jangly, indie rock earworm that’ll lodge itself in that part of your brain that loves Pavement.” [“Cooler Returns”] - NME

“Having heard the new album, Cooler Returns…we can attest that they have lost exactly none of the naïvety of style that had them create such infectious tunes the first time around.” - Louder Than War