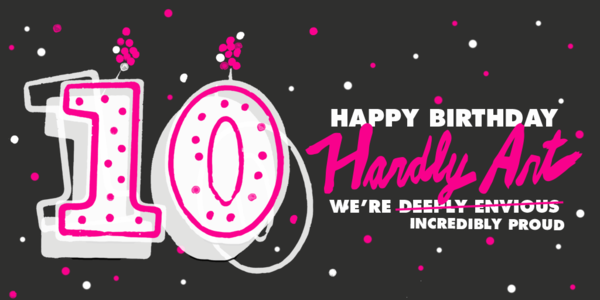 We’ve been bustling hard at the Airport Store in preparation for the 10-year anniversary of Sub Pop’s sister label, Hardly Art. To commemorate this special occasion, which coincides with National Poetry Month, I’ve decided some light verse is called for…

We’ll have a party for you.

If you have the chance to stop through!

Our little sister is turning ten,

And she’s way cooler than she’s ever been.

With The Julie Ruin last year,

With a decade of filling our hearts.

From Arthur and Yu to Dude York,

To Hardly Art, we pop a cork!

If you’re coming to town,

An extravaganza with friends and the fam,

On the eighteenth and nineteenth of May,

Let us all celebrate!

But if you’re just passing by,

Keep your eyes peeled for an excellent find.

Is still but a mystery…

I really hope that I do!

There’ll be buttons and stickers and tunes for all your ‘tudes,

If you are just now discovering this not-so-little-anymore gem of a label or looking to check out something new, we have some suggestions for you!

Hardly Art Picks from the Staff of the Sub Pop Airport Store:

- This lovely little side band from the Fresh and Onlys’ Tim Cohen is a real San Francisco treat!

- Listen to this while ‘blading on Alki. Blade or Die!

- Pre Parquet Courts. Music with jokes, but not joke music.

- Descriptions of Joe Casey: “Protomartyr are awesome, but they look like three scared teens who started a band with their alcoholic uncle.” “He’s like an inverse Bono.”

- Strangely revealing synth pop for your magical journey into the darkness.

It has been and continues to be a true honor representing all the local weirdos, punx, queers, poets, and female artists of Hardly Art at our store. We’re looking forward to what’s coming next*! The future is already someone’s dream.:)

*Speaking of what’s coming next… how ‘bout not one but TWO celebratory birthday shows, this coming May 18th and 19th at Seattle’s Chop Suey?! Details are here.