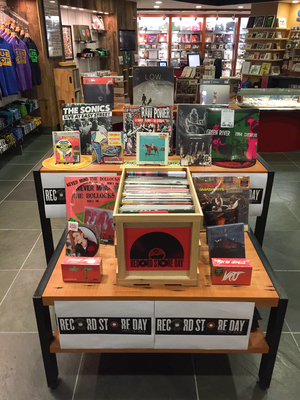 For the last few months, I have been one of the few Sub Pop corporate associates lucky enough to open the airport store at 6 A.M. For someone who has considered himself a night owl for his entire life, I’m amazed to see how many fully-alert and seemingly-functional human beings are roaming the airport at this hour. They are already munching on breakfast sandwiches, searching for electrical outlets to charge their phones, and staring at the black early morning sky through a 60-by-350-foot glass wall when I get to work.

They are also ready to exercise their purchasing power, which brings us to 6 A.M., this Saturday, April 16th, in the year of our lord Grunge, where I will have the special sleep-deprived pleasure of opening our airport shop for Record Store Day (RSD). While other record stores tout their once-a-year early/extended hours, I can’t find any store that will beat our standard 6 A.M. opening time, making us still the earliest-opening record store in the galaxy. (The closest I found on the west coast was the Everyday Music location in Beaverton, OR, which promises to open at 7 A.M. this year for Record Store Day.)

So, if you were worried about traveling through the Seattle-Tacoma International Airport on Record Store Day, and missing out on all the exclusive buying opportunities, fear not! At press time, we are still unpacking boxes and awaiting shipments, but we will definitely have some choice RSD titles for you to take home and/or on vacation with you this Saturday. I think all of these will fit nicely in your carry on bag. 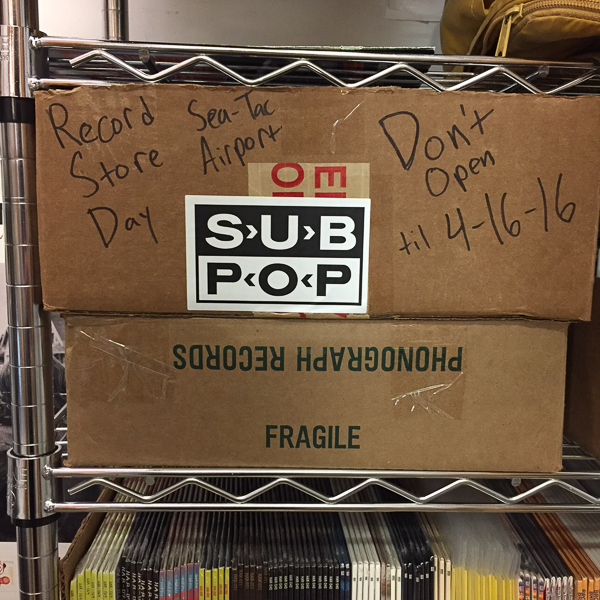 As always, we’ll have copies of the 2016 Sub Pop RSD titles. If you didn’t know, Sub Pop will release two different split singles this year: There’s one by Low and S. Carey (a.k.a. Sean Carey, drummer for Bon Iver and solo recording artist on Jagjaguwar) where they take on unfinished versions of each other’s songs, resulting in some jammy musical alchemy. And our other split single has METZ and Mission of Burma(!!!) covering each other’s songs. You can read more about these right over here.

But that’s not all! This year we also decided to stock some other non-Sub Pop RSD exclusives in the store. Here are a few that I recommend checking out:

-  METZ and Swami John Reis “Let it Rust” / “Caught Up”: With METZ, the singles just keep on comin’. After passing through San Diego whist on tour, they hooked up with John Reis (of Drive Like Jehu, Hot Snakes, and Rocket From the Crypt fame) and collaborated on two new songs for this gloriously noisy 7”.

- Green River 1984 Demos: These are the earliest recordings by the world’s first ever Grunge band. Jack Endino recently got a hold of the reel and was able to mix it; he says the band sounds “like a scrappy glam punk version of Mudhoney.”

- The Shaggs “Sweet Maria”/ “The Missouri Waltz”: From our good friends at Light in the Attic (can we ever get enough of them?) this 7” contains the previously unreleased song “Sweet Maria,” along with their (what bounds to be) idiosyncratic cover of the state song of Missouri.

- Ravi Shankar In Hollywood, 1971: This is a never before released recording of a private concert Ravi Shankar had in his very own home, for a small group of guests. Word has it that George Harrison was in attendance, and that this unique performance helped to inspire the largest-ever benefit shows at the Concert for Bangladesh, later that year.

- The Thermals “Hey You” / “White Rabbit”: Former Sub Pop band The Thermals just released a new LP this year, We Disappear, over on Saddle Creek Records. This 7” contains a song from that album, along with a sure-to-be-righteous cover of Jefferson Airplane’s “White Rabbit.”

- Various Artists Doused in Mud, Soaked in Bleach: A song-for-song tribute to Nirvana’s Bleach, featuring contributions from Beach Slang, Circa Survive, The Fall of Troy, and more.

- Man Man Six Demon Bag: This year marks the 10th anniversary of Man Man’s second album, Six Demon Bag. The band, whose frontman Ryan Kattner is also in Sub Pop’s own Mister Heavenly, originally released this record as a double 10”, and it is now available as a 12” LP for the first time ever.

- Xiu Xiu Plays the Music of Twin Peaks: The title says it all. Eerie yet beautiful music, from the greatest T.V. show to ever take place in Washington state, that will dance creepily into the red room of your consciousness.

- And many more titles to choose from!

I’d also be remiss not to mention that today, the day before Record Store Day, Sub Pop has just released the excellent Sam Beam and Jesca Hoop collaboration, Love Letter for Fire, and the airport store still has some smoke-colored vinyl Loser Editions.

On the subject of Loser Editions, make your RSD more artful with these limited color LPs still available at the airport store:

Mike & the Melvins - Three Men and a Baby (custom dust sleeve and white vinyl - sold out everywhere else!)

And we can’t forget colored vinyl options from Hardly Art. We still have Gazebos Die Alone (clear with yellow), Grave Babies Holographic Violence (blue and purple), Shannon and the Clams Gone by the Dawn (green and white) and Tacocat’s brand new release, Lost Time (black and blue), available on LP.

Now, if you’ve made it this far, you might be thinking, “Hey, I’m not flying through Sea Tac airport tomorrow, and it’s totally impractical for me to buy a plane ticket on such short notice.” Don’t worry. If you visit the Sub Pop Airport Store anytime this spring, every day can be your own personal Record Store Day (while supplies last, a.k.a, until we sell-out of this stuff).