Kyle Craft’s “Pentecost” is the latest offering from Dolls of Highland, his forthcoming Sub Pop debut.

NPR Music’s “All Songs Considered” had this to say of the track, “Pentecost” sees Kyle Craft…return to his hometown in Louisiana, haunted by the ghost of a friend who took his own life. Paired with his knack for great melodies, it demonstrates Craft’s emotional power as a songwriter (see premiere via “New Mix” March 1st).”

NPR Music also discussed Craft’s ‘Lady of the Ark” for its “Songs We Love” feature this week. They said of the track, “Like many artists from the South, Craft has a conflicted relationship with the region’s cultural duality, a topic he tackles on “Lady Of The Ark.” Shrouded in guitars and organ, he caustically wails, “Swing low, low sweet heathen / Swing for the wretch and the rock and roll kid,” a line he says he wrote in response to the “shame, shame thing that ‘church folk’ tend to do so often,” and which doesn’t sit well with Craft. “Roam this earth repeat it / All this sin until this wicked world makes sense in time,” he defiantly growls near the song’s end. Craft’s roaming days may be done for now, but “Lady Of The Ark” shows his music as wild-eyed and restless (“Songs We Love” feature March 2nd).”

Dolls of Highland was written, recorded and produced by Craft, mixed by Brandon Summers and Benjamin Weikel of The Helio Sequence at the Old Jantzen Building in Portland, and mastered by Greg Calbi at Sterling Sound. 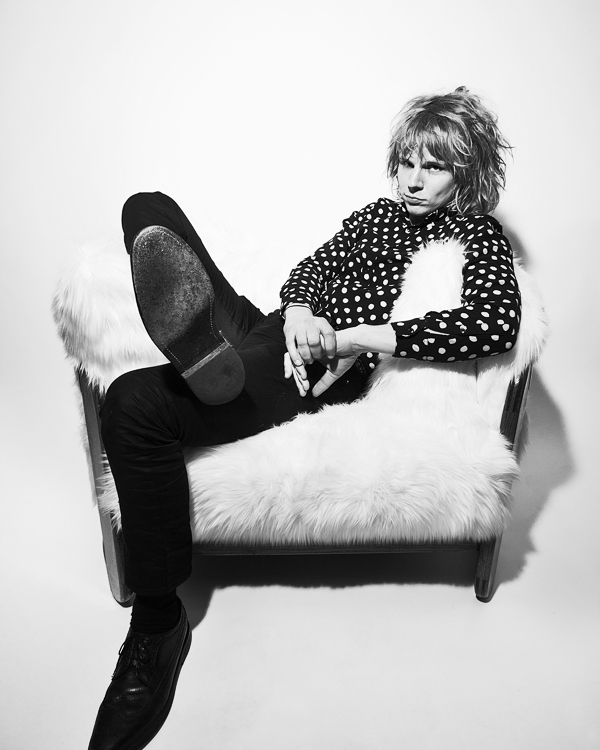 Kyle Craft grew up in a tiny Louisiana town on the banks of the Mississippi, where he spent most of his time catching alligators and rattlesnakes instead of playing football or picking up the guitar. He’s not the born product of a musical family, and bands never came through town–it was only a chance trip to K-Mart that gave him his first album, a David Bowie hits compilation that helped inspire him eventually to channel his innate feral energy into songwriting and rock and roll.

That self-made talent drives every note of Dolls of Highland, Craft’s exhilarating, fearless solo debut. “This album is the dark corner of a bar,” he says. “It’s that feeling at the end of the night when you’re confronted with ‘now what?’”

Craft knows the feeling well–Dolls began to take shape when everything he took for granted was suddenly over, including an eight-year relationship. “All of a sudden I was left with just me for the first time in my adult life,” he says. He decided to get himself and the music he’d been working on far away from the ghosts of his home in Shreveport, Louisiana, to make a new life for himself in Portland, Oregon, living under a friend’s pool table while he demoed new songs and started to tackle his own question about what came next.

Dolls of Highland crashes open with “Eye of a Hurricane,” a whirlwind of ragtime piano and Craft’s dynamic, enthralling vocals. He calls it a “jealous song,” stirred up by the memories of an ill-fated crush and a drama of “weird little connections, a spider web of what the fuck?”

The swinging, resonant “Lady of the Ark” is also tied up in that web, “a very incestuous song,” says Craft. “It’s about these messed up relationships, maybe involving me, maybe revolving around me.” Most of the characters and atmospheres on the album come from in and around Shreveport, where Craft briefly returned while recording the album for an intensely productive reckoning with his past. He stayed in a friend’s laundry room in the Highland neighborhood, where he recorded the whole album in two months on a home studio rig. “I dedicated the album to Shreveport and called it Dolls of Highland for all the girls and ghosts in town who influenced it so strongly.”

Craft eventually returned to Portland where Brandon Summers and Benjamin Weikel of The Helio Sequence helped refine and mix the album to move it from its DIY beginnings to a more fully realized work. Craft played most of the instruments on the album, but the recorded songs transmit the power of his live performance. “It’s just letting go,” says Craft. “I think it’s just all about feeling it in your chest.”

And then there’s Craft’s unforgettable voice–”I’m fully aware that I have a very abrasive, very loud voice, but Bob Dylan is the one that taught me to embrace that,” says Craft. “I stray away from him from time to time, but always come back. I don’t want to come off as antique, but I also don’t want to be afraid of paying homage to the stuff I’ve always loved.” With those influences as inspiration, Craft’s talent and singular creativity move the conversation into new and unpredictable places.

And no question, this album is very much about moving forward. “After everything fell apart, it didn’t take very long for me to learn who I was and what I should be doing,” says Craft, who is walking out on the other side with Dolls of Highland.

What ‘The People’ have said about Kyle Craft:

“Craft admits his voice sounds a good deal like Bob Dylan’s, and that his muse has come to him many, many times. Still, “Lady of the Ark” hints that Craft’s music is so full of its own weird singularity that he’s on to something far beyond idol worship.” -  Billboard

“With inviting, yet imperfect vocals and a jangly guitar melody, “Lady of the Ark” is a sweeping goodbye to a long-term relationship. It’s somehow warm, melodic, and rough at the same time.” [The Weeks Best Tracks”] - FLOOD

“It’s thrilling. It’s the sort of music that can only come from a somewhat unique musical outlook, a track that instantly sounds like nobody other than Kyle Craft. The huge sound of pounding drums, the almost mariachi handclaps, the frankly bizarre fairground-organ interlude, the lyrics than hint at a complex incestuous web of lives and lies, and all that before you even get to the voice…he has said that listening to Bob Dylan inspired him to embrace his voice and make the most of it. Kyle has suggested he shares a tone with Bob, but to our ears it’s more like the love child of Withered Hand and Neutral Milk Hotel’s Jeff Mangum, and that’s a very good, if slightly divisive, place to be.” - For The Rabbits

“Hard to believe given the innate sense of pop heritage that blossoms from every ounce of his fruitful, endearingly scorched lead vocal but it wasn’t until Craft stumbled upon a David Bowie that he began to take an interest in music. Lucky for us that he did – debut track ‘Lady Of The Ark’ is a stormy, rugged gem, led by one of the most distinctly impressive new voices in the game. A mighty fine introduction.” - Gold Flake Paint