In 2008, after 3 albums and ten years of touring and recording, The Helio Sequence (Brandon Summers and Benjamin Weikel) recorded their most dynamic and extraordinary album, Keep Your Eyes Ahead.

Keep Your Eyes Ahead married the Portland duo’s signature layered keyboards and impossibly big guitars with crisp songwriting and a relatively minimalist approach. The finger picking on “Shed Your Love” is backed by exquisite strings and ambient noise, but Summers’s serene, self-assured delivery remains front and center. While songs from the band’s early releases spanned up to 7 minutes, even the longest, lushest, catchiest track on Keep Your Eyes Ahead (the fiery anthem “Hallelujah”) clocks in at 4 and a half minutes, evidence of just how refined their craft had become. Vocals were recorded spontaneously in bedroom closets and living rooms, which may explain the haunting urgency you hear in Brandon’s voice, especially on the driving title track.

Keep Your Eyes Ahead also revealed an emotional depth heretofore unknown. Brandon Summers had damaged his voice and spent six difficult months relearning to sing again. Overcoming the existential weight of losing his voice would lend a new urgency to every melody and lyric. Behind this positive story of adversity overcome lay the loss of someone very close to him that would find its expression in songs like “Lately” and “The Captive Mind”.

“My mother had gone missing and I didn’t know if I would ever find her again. She had literally disappeared overnight and I didn’t know where she was or if she was alive,” says Summers. “It’s something I’ve never shared publicly until now, but writing for Keep Your Eyes Ahead was a way for me to channel all of the pain and fear of losing her.” Summers continues, “Many people have shared their stories with me of how Keep Your Eyes Ahead has helped them through difficult times. Through it all, it’s an album of hope.”

Produced by the band, Keep Your Eyes Ahead confirms in The Helio Sequence an energy and a range that continues to defy narrow categorization. Unapologetic pop and folk meld seamlessly to create songs that are both hopeful and epic in their scope, and at the time, more polished than anything they’ve ever done. Keep Your Eyes Ahead is the sound of a band and a decade-old partnership that’s been invigorated. And that’s exactly how the songs will make you feel: invigorated. 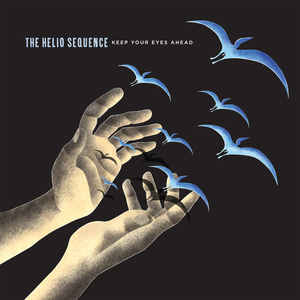 Keep Your Eyes Ahead (Deluxe Edition)