News for The Helio Sequence

The band celebrates the album’s 10th anniversary with North American tour dates in November and December; Keep Your Eyes Ahead: Deluxe Edition features the remastered original album, plus demos, alternate versions, and outtakes from the same era

On October 12th, 2018, Sub Pop will reissue The Helio Sequence’s landmark album Keep Your Eyes Ahead for its 10th anniversary as a deluxe edition.The newly remastered set will be available on CD/2xLP/DL and includes the original 10-song effort along with a second album of demos, alternate versions, and outtakes from the same era. Keep Your Eyes Ahead: Deluxe Edition was mastered by The Helio Sequence at Helio Sound studio in their hometown of Portland, Oregon.  You can listen to “Lately” and an acoustic version of “No Regrets” and pre-order the record today.
Upon its release in 2008, the record was warmly received from critics and fans alike. MAGNET named it one of the “Top 25 Albums of 2008,” and raved, “Keep Your Eyes Ahead is a shining example of how to go retro while still moving forward.” Washington Post offered this, “Trading its former album’s dense keyboard compositions for a more expansive and organic sound, Keep Your Eyes Ahead is the work of a band commanding its audience’s attention. Stand out tracks like “Hallelujah” and “Can’t Say No” show the band flexing its melodic muscles, branching out into grandiose guitar rock territory without sacrificing the nuance and keyboard flourishes of its early work.” And Drowned in Sound, in its 8/10 review of the album, had this to say, “And now, at last, the protracted silence is broken by the surging scream of Keep Your Eyes Ahead, an album that feels as vital as the first, gulping breath of the near drowned. What this record means to Summers and partner Benjamin Weikel is apparent in the intense force of feeling.”

The Helio Sequence will celebrate the 10th anniversary of Keep Your Eyes Ahead playing the album in its entirety on tour, beginning November 14th in San Francisco at the Chapel and ending December 14th in Portland at the Doug Fir. Tickets for these dates are on sale now. Preceding the tour, the band will appear at McMinnville, Oregon’s Walnut City Music Festival on September 1st, and Rainier Day along Airport Way in Seattle’s Georgetown neighborhood on October 6th. 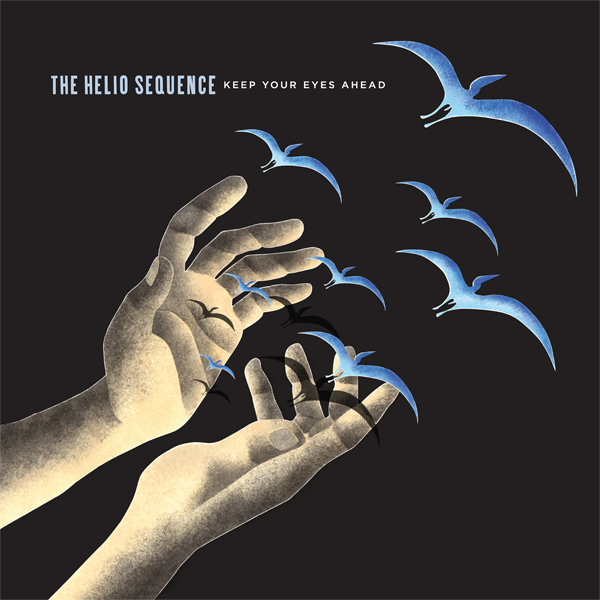 The Helio Sequence is out now on CD/LP/DL worldwide and can be purcahsed in fine record stores near you as well as online retailers such as Sub Pop Mega Mart, iTunes, Amazon and Bandcamp. Worth noting, however, is that while supplies last, customers who purchase the LP version of the album from megamart.subpop.com will receive the limited “Loser Edition” on yellow-colored vinyl.

Additionally, The Helio Sequence’s US tour  will resume on June 3rd in Boise, ID at Neurolux and will run through October 1st in Spokane, WA at INB Performing Arts Center. The Helio Sequence will be direct support for Death Cab For Cutie  on Sep. 30th & Oct. 1st . Get the complete list of tour dates below.


What people are saying about The Helio Sequence:

“…The duo’s latest is an ambitious, smart, and memorable collection of crisply produced clean-channel rock that shows all the newcomers how it’s done.” [8/10] - FLOOD

“”Stoic Resemblance” is among the most pop-friendly things the duo have put to tape. Of course, “pop-friendly” to The Helio Sequence takes the shape of more direct song structures and vocal hooks. Naturally, it’s all filtered through their signature kaleidoscopic filter, hitting a chord somewhere between gauzy and taut. At a tight three minutes, “Stoic Resemblance” shows The Helio Sequence at their most spontaneous and their most playful, which is not only a surprise turn from the studio-intense direction that’s long defined them with surprisingly fun results.” [Song of the Day] - KEXP

“It’s a hit of catchy goodness with a funky bassline with a chorus of “oh na na nas.” It’s a bonafide jam.” [“Stoic Resemblance”]  - KCRW

“A rager by comparison, rhythmically reminiscent of Beck…It’s great to find the Helio Sequence upping their game, and being a little less stoic.” [“Stoic Resemblance”]  - Buzzbands

The Helio Sequence are set to release their self-titled 6th album on CD/LP/DL May 18th & 19th worldwide via Sub Pop. The Helio Sequence, featuring the highlights “Stoic Resemblance,” “Upward Mobility,” and “Battle Lines,” was produced & mixed by the band at The Old Jantzen Building in Portland, OR and mastered by Greg Calbi at Sterling Sound.

The Helio Sequence will tour extensively in 2015 to support the release. Preceding that tour, the band have scheduled an acoustic performance on March 31st in Seattle at The Triple Door. For up to date information on live dates & tickets, please visit http://www.theheliosequence.com.

Preorders for The Helio Sequence are available through Sub Pop Mega Mart, iTunes, Amazon and Bandcamp. All customers who pre-order the LP version of the album from megamart.subpop.com will receive the limited “Loser Edition” on yellow-colored vinyl. Additionally, CD and LP versions of The Helio Sequence will also receive The Sunrise Demos, a CD comprised of 11 demos recorded during the making of the album (while supplies last).  Additionally, there will be a new T-shirt design available as stand-alone item or as part of a bundle with purchases of The Helio Sequence.

About The Helio Sequence:
The self-titled sixth album by The Helio Sequence began with a friendly competition. Several of the duo’s friends within the Portland, Oregon music scene had been playing “The 20-Song Game.” The rules were simple, playful and ambitious: Songwriters would arrive in their studios at prearranged times and spend all day recording 20 complete songs. When they were finished, they’d have a party, listen to the results and talk about the process—of taking the good with the bad, of letting creativity push past constraint, of simply making music in the moment. Brandon Summers and Benjamin Weikel took the spirit of the “The 20-Song Game” to heart, and forged ahead writing a new record.

In May of 2014, inspired by the “20-Song Game”, they began arriving each morning in their Portland space—housed in the cafeteria and break room of an old warehouse— with the mission of making as much music as possible in one month. They began exploring and capturing, recording guitar riffs and keyboard loops, drum patterns and bass lines. One piece documented, they quickly advanced to the next idea. Summers and Weikel didn’t discuss what they were making or the reference points that informed it, though such discussions had once been central to The Helio Sequence’s more self-conscious process. They just played. Created. In time, they returned to each fragment, broadcasting it over the studio PA, jamming and recording the results. Mistakes didn’t matter, and second chances didn’t exist. After two weeks, Summers and Weikel began cutting those loose takes into rough shapes, steadily building songs from their cavalier sketches.

When June arrived, the duo gathered their 26 finished songs and sent them to 31 friends, fans and family members. They asked each person to rank their 10 favorite tracks. By summer’s end, they had arrived at the brisk 10 tracks that shape the breathless and magnetic The Helio Sequence—a record so named because it’s a kind of clean restart for the longtime pair, a revamp of their process and a revitalization of their results.

The Helio Sequence is a renewed push forward for the band: From the cool wallop of “Deuces,” where guitars snarl and harmonies soar, to the stuttering anxiety of “Upward Mobility”, where pianos pound and drums race, this collection depends upon an effortless kinetic energy. Lyrically, “Stoic Resemblance” is a study of existential anxiety, but musically, it’s a beguiling burst of pop, Summers’ vocals rising over and sliding off of Weikel’s big, irrepressible beat. The bittersweet “Leave or Be Yours” evokes the easy twinkle of romance and the smoldering sadness of losing it. Crisscrossing vocals and cross-talking guitars and drums map a broad swirl of emotions.  There’s a delightful candor to The Helio Sequence, an openness that is a rare and special feat for a band about to enter its third decade (read more at Sub Pop).