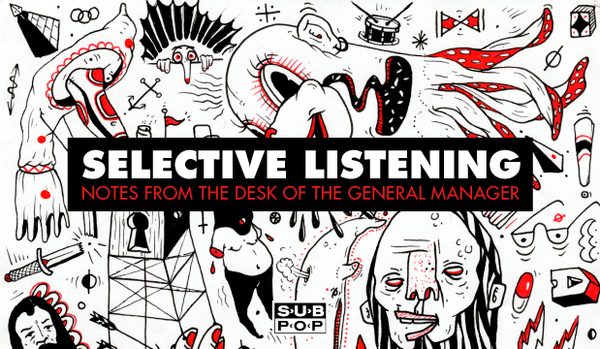 Selective Listening: Notes from the Desk of the General Manager, April 2015

A Brief History of Tooting Our Own Horn

Though Bruce (here I mean Pavitt) had been using the title Subterranean Pop since sometime in ‘79 for fanzines, cassette compilations, radio shows, potent weed hybrids, and the like, somewhere along the line he and Jonathan (and here I mean Mr. Poneman, aka my boss) decided that April 1, 1988, the day they quit their jobs and rented a tiny office in the Terminal Sales Bldg., was the day the Sub Pop label was really born. No doubt the three of you still reading this possess the high-level math skills to quickly compute the following fact that will be the foundational excuse for the nonsense which follows: today, April 1, 2015, is the 27th birthday of Sub Pop Records, the record label most well-known (to me anyway…) for continuing to offer me employment. (You are, of course, free to have your own associations…).

And, what better way to celebrate a birthday than with a good party? We here at Seattle’s most loud-mouthed record label, have a long, expensive tradition of congratulating ourselves with self-indulgent parties just for continuing to exist for another year.

In 1998, to commemorate 10 whole years of record making and flirting indiscreetly with insolvency, we put together a party at The Showbox here in Seattle, with Rebecca Gates of The Spinanes, 10 Minute Warning, TAD, The Afghan Whigs, and surprise guests The Murder City Devils. The bands were all great and it was all an exceedingly good time. And… Around this same time the MTV show “The Real World” was filming a season here in Seattle. Several or maybe all of the cast members participated in the internship program at our local commercial alternative radio affiliate (to the best of my memory, they were referred to as something like “Regurgitators”) and came to the event early to conduct interviews with the bands for the station. During their interview with Tad Doyle (of TAD…), beneath a high school reunion-style banner reading “Welcome Alumni! Sub Pop 1988-1998”, Stacey or Donny or Puck or whoever it was, lost no time in diving into the tough questions: “So, what’s it like for The Afghan Whigs to play Sub Pop’s anniversary show?” Tad, known equally for visibly resembling no one so much as Tad, the guy from TAD, and also for being a genuine and affable guy, ran with it and gave an insightful and largely fictional interview on the subject.

No idea (or clear recollection) of what happened between anniversaries 10 and 20, really.

But, in July of 2008, for our 20th anniversary, we held a 2-day festival called SP20 out at Marymoor Park, preceded by a comedy show at the Moore Theatre that Friday night, and then we gave away all of the money we made. We also hosted a party at the Space Needle here in Seattle, painted its roof to look like a 7” label (with the words “Thank You Seattle. Love, Sub Pop”), and flew a giant Sub Pop flag from its very top. Of the fucking SPACE NEEDLE! There are photos to prove I am not making this up. This was a fantastic event – tons of old friends showed up, all of the bands played amazing sets AND got along, good vibes reigned throughout, and somehow, miraculously nothing went disastrously wrong. We did, inadvertently offend Girl Trouble by not thinking to invite them to play, but they wound up showing up and playing for free outside the front gate anyway, so even that worked out. (Strictly Sacred, the doc about Girl Trouble is very worth seeing, BTW.)

Our only possible regret: why didn’t we call the whole thing SPF20? That’s definitely a better name for a summer festival, right?

And then, in July of 2013, we hosted a free one-day event in Seattle’s gritty, colorful Georgetown neighborhood which we called The Sub Pop Records Silver Jubilee. As you might imagine there was live music, and an opening night comedy show, but this time there was also a record fair, poster fair, readings and panels, a historical art show at a pop-up Sub Pop Mega Mart, and as much merch as we could possibly make and sell. All told, somewhere around 40,000 people showed up, and I got to answer some questions from my kids (aged 10 and 6 at the time) about the full mod prim gent in a dusty Utilikilt and Thunderdome hairdo/beard design, who, on a roughly 4’ x 4’ scrabbly little ashtray of ground between two buildings, was offering passersby the chance to staple cash to his body… Stay in school, kids!

The Silver Jubilee was also an incredibly good time, an unbelievable gathering of some of our favorite people and music, and great throngs of well-meaning, happy and clearly intoxicated strangers (and also the guy with the stapler).

The one possible negative aspect: some grumbling that Soundgarden did not materialize as a surprise guest. To be clear, we never actually said that they would (though, the guy from The Afghan Whigs in this video seems to be saying something that MIGHT be confusing…).

Happily, in the end, our Yelp reviews were largely positive…

And, because we just can’t seem to keep our hands (or, in this case, bands) off of it, we somehow convinced the usually responsible people who operate the Space Needle to allow Mudhoney to perform on the actual roof of this very tall, very iconic building a few days before the Jubilee. Our friends at KEXP broadcast and recorded this monumentally historic event.

One thing that’s been unmistakable, through all of this, is that none of it matters if you guys aren’t paying attention. And, a lot of times, more times than we’d have guessed, you have! We’re grateful, thank you.

While the rhetorical question up there at the beginning, about 6 who-gives-a-shits ago, asking what better way to celebrate a birthday than with a good party, sort of begs a less rhetorical question along the lines of, “Then, sweet, merciful Jesus Christ pose, why is this overlong blog post not full of details about a forthcoming anniversary party instead of all of this preening, laurel-resting poppycock??!” the answer is pretty simple: we’re not ready yet. We’re keeping our nose to the grungestone: putting out a bunch of incredible records, opening a shop at the airport, working on the 2nd Sub Pop Festival in Brazil, tightening up our Myspace profile, and scheming for the future. The next time we throw a party, you are all totally invited.

Happy our birthday to you,