The first time any one seemed to care that Edgar Graham existed was in the summer of 1998, when he impressed himself upon the members of Modest Mouse while backstage at a Denver show. Streaming with blood from the window he had recently broken his way through, Graham stormed up to the band and then jabbing his thumb at the emptiness behind his left shoulder as if to indicate someone else, or the lack thereof, he introduced himself as Ugly Casanova. He displayed a gentle, if not slightly unnerving, mental instability that endeared them to him and caused them to adopt him in a way only possible of a band with a long tour ahead of them.

Over the weeks Casanova began to share some rough songs with the trio and, after much prodding, with a few sparse crowds that milled about hours before the opening band was scheduled to appear. While Casanova’s talent was unmistakable, by the time he finished each impromptu performance, his face held a look of shame and anger that more often than not, foreshadowed a retreat into himself. However, by the end of Modest Mouse’s tour, Casanova, with much reluctance, was persuaded to record some of these songs and hand them over to record labels for issue as singles or parts of compilations. Predictably, immediately after he had done so, he disappeared.

Other than a sheaf of ramblings delivered to Modest Mouse’s singer
Isaac Brock in the summer of 1999 that then inspired that band’s The Moon and Antarctica nothing had been heard from Casanova in years and those that still thought of him grew fewer. Then in November of last year, a faded and water-damaged bundle was discovered among a stack of old packages during one of those general decontamination purges that so often follows a mail scare. Addressed simply to “Sub Pop, Seattle, WA,” there was little evidence of its origin. Inside, swathed in tape, Silly Putty and pelts of three identifiable rodents was a greeting from the long-lost Graham. Numerous tapes and a list of requests that alternated between raving demands for destruction of said tapes and meek pleas for recognition of their contents were extracted from the mess of the package.

Fortunately Sub Pop recognized that the tapes held promise. So, after a painstaking compilation and mastering of their various tracks, the result is this album that has as its name the three words found scrawled on the back of Casanova’s list and again in one of the songs: “Sharpen Your Teeth.” The songs hold all of the elements of Ugly Casanova, as displayed to those few who knew him, down to the frenetic “Shey Shaw! Shey Shaw!” with which he occasionally punctuated his speech.

Until such time as Graham/Casanova resurfaces to take credit for his work and add a bit more to whatever understanding of him still exists, this version of Sharpen Your Teeth will have to suffice. Produced by Brian Deck and Isaac Brock at Glacial Pace Studios (Oregon), Ugly Casanova’s songs are here performed by Misters Brock and Deck, as well as John Orth, Tim Rutili, Pall Jenkins, and a handful of like-minded collaborators. Some combination of these co-conspirators will as well travel the countryside, performing these songs and seeking out the enigmatic Casanova. Interested parties would do well to heed his advice and, “sharpen your teeth or lay flat.”

Reissue, Repress, Rejoice!: Built to Spill’s ‘There’s Nothing Wrong With Love’ & Ugly Casanova’s ‘Sharpen Your Teeth are out on vinyl 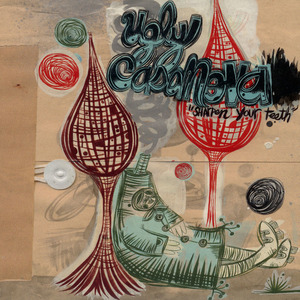