Without a brutal evaluation of their own becoming, TV Priest might have never made their second album. Heralded as the next big thing in post-punk, they were established as a bolshy, sharp-witted outfit, the kind that starts movements with their political ire. There was of course truth in that, but it was a suit that quickly felt heavy on its wearer’s shoulders, leaving little room for true vulnerability.

“A lot of it did feel like I was being really careful and a bit at arm’s length,” says vocalist Charlie Drinkwater. “If I’m honest, I think maybe I was not fully aware of the role I was taking, how I would be perceived. I had to take a step back and realise that what we were presenting was quite far away from the opinion of myself that I had. Some of the ways people would interpret the music and my performance isn’t really me, and I didn’t know why I was trying to wear that coat of the meat-and-two-veg rock guy. Now, I just want to be honest.”

Having made music together since their teenage years, the London four-piece piqued press attention in late 2019 with their first gig as a newly solidified group, a raucous outing in the warehouse district of Hackney Wick. Debut single “House of York” followed with a blistering critique of monarchist patriotism, and they were signed to Sub Pop for their debut album. When Uppers arrived in the height of a global pandemic, it reaped praise from critics and fans alike for its ‘dystopian doublespeak’, but the band — Drinkwater, guitarist Alex Sprogis, producer, bass and keys player Nic Bueth and drummer Ed Kelland – were sat at home like the rest of us, drinking cups of tea and marking time via government-sanctioned daily exercise. As such, the personal and professional landmark of its release felt “both colossal and minuscule” dampened by the inability to share it live. “It was a real gratification and really cathartic, but on the other hand, it was really strange, and not great for my mental health” admits Drinkwater. “I wasn’t prepared, and I hadn’t necessarily expected it to reach as many people as it did. It sounds a bit naïve, but it was all very quick. It felt kind of divorced from reality.”

As such, My Other People intentionally maintains a strong sense of earth-rooted emotion, taking full advantage of the opportunity to physically connect. Using “Saintless” (the closing song from Uppers) as something of a starting point, Drinkwater set about crafting lyrics that allowed him to articulate a deeper sense of personal truth, using music as a vessel to communicate with his bandmates about his depleting mental health. “Speaking very candidly, it was written at a time and a place where I was not, I would say, particularly well,” he says. “There was a lot of things that had happened to myself and my family that were quite troubling moments. I apologized to the band the other day for not being a great friend or person in this process, because I simply was not happy. Despite that I do think the record has our most hopeful moments too; a lot of me trying to set myself reminders for living, just everyday sentiments to try and get myself out of the space I was in. Whether or not the sincerity is understood, I think I’ll always be proud of that.”

“It was a bit of a moment for all of us where we realised that we can make something that, to us at least, feels truly beautiful,” agrees Bueth. “Brutality and frustration are only a part of that puzzle, and despite a lot of us feeling quite disconnected at the time, overwhelmingly beautiful things were also still happening.”

To strike this balance, My Other People relies on the band’s tight-knit working method, with Bueth once again at the self-producing helm. Following their own intuition as part of a “feverish” writing process, they looked inwards for inspiration rather than attempting to ape any sonic heroes, ending up with something that feels much more like affirmingly widescreen alt-rock than it does post-punk. Arrangements give room to let the voice roam; the optimistic melodies of “The Breakers” light flares to accompany Drinkwater’s recognition of the path that leads him back to friendship, while the rumbling pace of “Unravelling”

reflects his more fractious state, looking for a safe place to land amidst the detritus of biting guitars. Where possible, recordings weren’t agonised over, but rather trusted on their initial takes when the mood had hit right. Though they recognise that ‘ band still searching for sound on second album’ is a sentiment that is often weaponised as criticism, it’s a process of self-improvement that Drinkwater is keen to protect: “Why would I keep making art if I didn’t believe that the best thing was not around the corner?”

Visually speaking, the same intention of momentum carries forth. The album’s artwork, photographed by Edward Thompson, depicts two children looking out to sea, a scene suspended somewhere between melancholy and hope. The video for “One Easy Thing”, the album’s lead single, directed by long term collaborator Joe Wheatley (“Decoration”, “Press Gang”) is a homage to new wave and French cinema, the singer donning full medieval armour as he bleeds and dances, persevering despite the seemingly impossible circumstance. Though Drinkwater wants its message of discomfort to show, he’s also keen not to overexplain it: “Last time, I literally was like, ‘please like me’, to everyone,” he laughs. “I stood next to the record and talked it to death, what things meant or where I did and didn’t stand. This time, I think it’s better if I leave some space.”

An allowance for the interpretation of others is perhaps most clear on “Bury Me In My Shoes”, built around a stark chorus line; “Life Only Comes In Flashes Of Greatness.” It is a lyric borne out of deep depression, the existential fear of our ever-changing mortal coil.  But if you look at it differently, it could just as easily be read as affirmation, a reminder to seize the moment and make it count. This tension between the fullness of the glass, the cathartic value that such a lyric may hold in different lights, is central to My Other People — a record that heals by providing space for recognition, a ground zero from which you’re welcome to stay awhile but which ultimately — realistically — only leads up and out. For TV Priest, it is a follow-up that feels truly, properly them; free of bravado, unnecessary bluster or any audience pressure to commit solely to their original sound.

“When we finally got to tour, it was so enjoyable; it was punk and it was intense and it was sweaty rooms. It was – and it is - very cathartic to do that,” says Drinkwater. “But when we go back on the road, we’re interested in being a band that feels like we’ve progressed. Sometimes it can be scary to be quiet, you know? But by leaning into that, you realise that actually, maybe, that’s exactly the thing that makes it so affecting.” 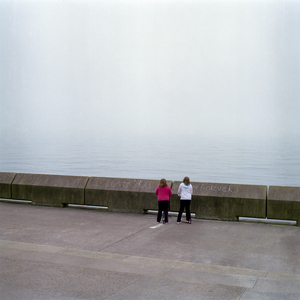