The Pacific Northwest’s abstract expressionist metallurgist ensemble SUMAC are known for their knotty, long-form explorations of the territory between chaos and cohesion. On songs that barely fit within the time constraints of an LP side, they vacillate between the visceral power of bottom-feeder metal, the instinctive spontaneity of free jazz, and the tactile pleasures of experimental music in a mélange of tightly wound riffage and aural deconstructions. One can’t help but wonder how their protracted dirges and drones could possibly be contained within the format of a 7”, but with their Sub Pop Singles Club Vol. 5 contribution we’re all set to find out.

“Two Beasts (excerpt)” spans both sides of the vinyl edition, and even then we’re only catching a glimpse of a longer composition. It may seem like a loss to learn that a third of the run-time for “Two Beasts” didn’t make it on the 7”, but SUMAC’s songs have always felt like snapshot of a fleeting moment where order arises out of entropy, and so on the vinyl version we are merely experiencing that phenomenon of genesis and decay within a tighter timeframe. And, happily, we can hear the entire 18+ minutes of “Two Beasts” by listening on digital music platforms, where it lives as a single unedited song. Recorded at The Unknown in Anacortes, WA by Nicholas Wilbur and HoLC by Aaron Turner in Vashon, WA in the early part of 2020 and mixed by Kevin Ratterman at Invisible Creature in Los Angeles, “Two Beasts (excerpt)” is a fitting continuation of the sonic rise-and-fall documented on their latest album May You Be Held. 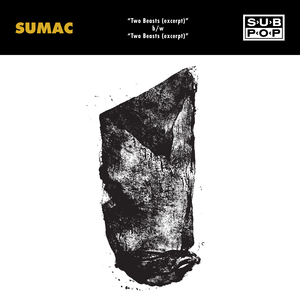