BACKGROUND:
Six Finger Satellite has confected “Law of Ruins,” a joyous, menacing romp through the ages, a testament to the power of that now obscure instrumental lineup — drums/bass/guitar/throat. At first it may sound like a departure from their more recent fugue states, like the feelgood Moog-fueled psychosis of “Severe Exposure,” or the nightmare of reason evidenced on “Paranormalized.” But it is also the natural culmination of the core element in all their music — the urge to explode, to be the unswerving heroes of some monumental jackass prophecy, to make your heart break and your genitals throb, free at last from the prisons of cool and the safe houses of marketable irony. The difference is only that now they wish to lead you not into darkness, but into the hard light of day. It’s your choice, but if you don’t like Six Finger Satellite, how are you ever going to learn to love yourself?

HIGHLIGHTS:
“Six Finger Satellite channels pure power through lead singer J Ryan, who writhes and jerks and plays his strap-on synthesizer in what might be an homage to Edgar Winter and Devo.” —The New Yorker

“The weak of heart need not bother with this one, but those hankering for a manic musical assault to jump-start their boring lives need this.”
—Ray Gun

“Heartless and arty where their compatriots are heartfelt and artless, Six Finger Satellite are the best Sub Pop band since
you-know-who.” —Melody Maker

“Severe Exposure is the ultimate testament to advanced underground guitar technology.” —Guitar for the Practicing Musician

“With wires everywhere obscuring the operation, Severe Exposure flashes a guitar band confident enough in its stage power to delve heavily into Moogs, disco beats, and panicky vocals. With mood so established, this testy compliment to evolution presses in a crazy protracted push.” —Alternative Press

“Fuck but these guys rule.” —Factsheet 5 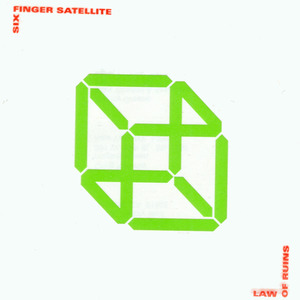