Three Men and a Baby is the new album by Mike and the Melvins. It was supposed to come out sixteen years ago.

So, about the record: It’s real good! Mike’s signature bass crunch and vocals are all over it, and the Melvins are in fine form. It has everything from hefty noise-rock churn (ref. the lead track, “Chicken ‘n’ Dump”) to a Public Image Ltd. song to cough-syrup blues (“A Dead Pile of Worthless Junk”) to helpful advice (“A Friend in Need is a Friend You Don’t Need”) to deconstructed black metal (“Art School Fight Song”). Neither Melvins nor godheadSilo fans will be disappointed, nor will detractors of either; to paraphrase Mike, if you don’t like it, it probably wasn’t meant for you.

Most of Three Men and a Baby was recorded in 1999 at Louder Studios by Tim Green (The Fucking Champs), and the rest was recorded and mixed in 2015 at Sound of Sirens by Toshi Kasai. 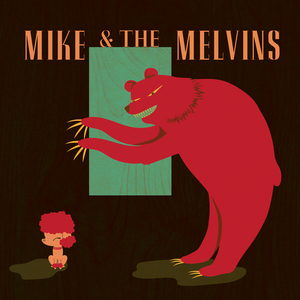 Three Men and a Baby