A multitude of rock music scenes populated the expanse of Los Angeles in1989: hardcore punk, industrial goth, roots rock, and Sunset Strip hair metal to name a few. L7 fit into none of them. Guitarist-vocalists Donita Sparks and Suzi Gardner, bassist-vocalist Jennifer Finch, and newly added drummer Dee Plakas were creating their own unique blend of punk and hard hooky rock, with humor and cultural commentary along for the ride.

But making a mark on the LA underground rock scene was more challenging than it seemed.

L7’s Smell the Magic: 30th Anniversary Edition featuring all 9 songs remastered & available together on vinyl for the first time 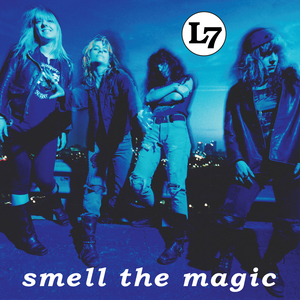