These are but three of the misnomers historically assigned to electronic pop music. Yes, Wendy Carlos accompanied Stanley Kubrick’s dystopian vision of A Clockwork Orange with crude synthesizers, but that was 40 years ago! Forbidden Planet and its unnerving soundtrack by Bebe and Louis Barron haven’t been contemporary since Dwight D. Eisenhower sharpened pencils in the Oval Office. The suggestion that electronic music is somehow detached from the human experience is as outdated as the cakewalk.

Canadian two-piece Handsome Furs don’t just shrug off this myth on Sound Kapital, they reject it with every fiber of their shared being. Like Fad Gadget and Suicide before them, husband and wife Dan Boeckner and Alexei Perry use keyboards and drum machines to forge life-affirming anthems taut with muscle and blood. These nine songs of innocence and experience occasionally look ahead to a better world in the not-so-distant future, but Handsome Furs know what time it is: Now. They are fully engaged in the moment and their surroundings, wherever that may be.

Sound Kapital is the first Handsome Furs album written exclusively on keyboards though guitars are still heavily prominent in the recording. This was a conscious decision, made for a few reasons: a) it forced Dan, whose primary instrument is guitar, to find fresh avenues of expression; b) it facilitated writing on the road. The latter concern is especially important. Even with their new analog synthesizers, Handsome Furs can still fit all their gear into a subcompact car—or the saddlebags of a camel. Alexei and Dan have joked about being “closet journalists,” but this is no laughing matter. Being able to work as they travel permits visceral editorializing about their eye-opening adventures. The jittery, electro-hardcore “Damage” incorporates samples of radio broadcasts concerning a Hong Kong hostage situation that was unfolding while the Furs were in the Philippines.

If the electronic timbres and simple melodies of Sound Kapital evoke memories of early OMD and Depeche Mode, so be it. That can’t be helped, a side effect of how they use their instruments. Handsome Furs have never been drag-and-drop songwriters, preferring instead the slight inconsistencies that occur when instruments are synchronized not via MIDI sequencing, but simply hitting buttons and strings at more-or-less the same instant. There is nothing intentionally “retro” about Sound Kapital. Lend an ear to “Memories of the Future.” Dan and Alexei make no bones about their distaste for nostalgia, venting frustration at peers who fritter away hours watching ’70s snack food commercials and Saturday morning cartoons on YouTube as the 21st century lurches forward into uncertainty.

One musical precedent Handsome Furs do acknowledge is the attitude heard throughout the hard-to-find ‘80s Eastern Bloc electronic and industrial sides they listened to during their travels. While Western bands of the Reagan/Thatcher era retreated to sunny Compass Point to dream up chart-friendly reflections on the dignity of labor, their counterparts in Yugoslavia, Poland and Bulgaria were living the reality, working in hazardous chemical plants by day and dodging secret police at night. That enduring struggle to create against all odds fuels “Repatriated” and “Cheap Music,” cuts inspired by the young bands Handsome Furs have played with, under incredibly risky circumstances, in repressed regions like Myanmar and the city of Wuhan, in China’s Hubei province. Handsome Furs don’t plan to renounce their Canadian citizenship, but throughout Sound Kapital, they pledge their allegiance to something bigger: the international family of artists who dare to defy authority.

It isn’t just the people they have met on their travels through South America, the Far East, and Eastern Europe that inspire them. Culture shock informs their music, too. In the metropolises of China and Korea, Dan and Alexei discovered streets of tightly-packed bars and shops all pumping out different strains of tinny pop music at the same volume, their exteriors illuminated by bright, flashing lights. The resulting cacophony is described as “renao” (a word roughly translated as “hot,” but also meaning “noisy”), which the Chinese consider a positive thing. “No Feelings,” the album’s climatic closer, does not endorse nihilism or the eradication of emotion. Instead, it celebrates the joy of being a blank slate, open to such unfamiliar experiences; it also attempts to recreate that sensory overload via the squall of white-noise guitar at the song’s churning center.

Sound Kapital was recorded quickly, polished and rehearsed in the Furs’ derelict Montreal studio, then preserved for posterity by longtime producers Howard Bilerman and Arlen Thompson at Hotel2Tango, mixed by Finnish dudes Antti Joas and Jonas Verwijnen at Kaiku Studios in Helsinki and Berlin, and mastered by Harris Newman at Grey Market Mastering in Montreal. Fans who enjoyed Handsome Furs previous albums, Plague Park (2007) and Face Control (2009), will undoubtedly notice the cleaner sound and absence of slower tempos. This is also deliberate. Even as they sing about ugly truths, Dan and Alexei increasingly want to instill listeners with hope—or at least the rush of endorphins that accompanies vigorous dancing. 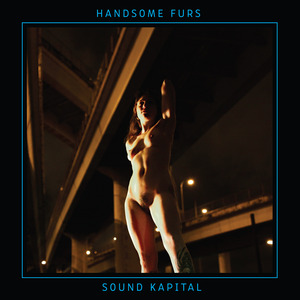