Clackamas, Oregon’s Dead Moon is truly one of the most independent and revered Northwest underground bands of all time. With Fred Cole on guitar and vocals, his wife Toody on bass and vocals, and the indefatigable Andrew Loomis on drums, Dead Moon have been churning out their own indescribable brand of rock and roll for nearly 20 years now. Their dedication and love for each other and what they do make it unlikely they will be stopping anytime soon.

Fred began his recording career in 1964 with The Lords, releasing the single “Ain’t Got No Self-Respect.” Fred’s next band The Weeds released a 7” before being renamed The Lollipop Shoppe to avoid confusion with The Seeds (with whom they shared a manager). Their 1968 burner “You Must Be a Witch” was released on 7” by MCA subsidiary Uni Records and eventually landed on the first Nuggets anthology box set. The Lollipop Shoppe / Weeds configuration went on to play with the likes of The Doors, The Seeds and Big Brother and the Holding Company with Janis Joplin before disbanding in 1969.

Fred and Toody met in Portland in 1966 after The Weeds ran out of gas on their way to Canada where members of the band were planning to wait out the Vietnam War. They were married in 1967, and when The Lollipop Shoppe disbanded in 1971, the couple spent some time homesteading in the Yukon, briefly lived in LA and finally landed back in Oregon, just outside of Portland, in Clackamas.

In 1987, after years spent playing in and releasing records by a dizzying succession of bands, Fred and Toody recruited Andrew Loomis to play drums for a new rock and roll band that would be stripped to its rawest essentials: electric guitar and bass with no effects, simple, powerful drumming, and tough, impassioned vocals (from both Fred and Toody). A red moon Fred and Toody saw on the way home from one of their many trips to Reno spawned the name for the new band, and Fred’s desperate, intense and haunting lyrics fit perfectly. A new label was formed (Tombstone Records: “Music Too Tough to Die”) and Dead Moon began releasing a slew of unforgettable home-recorded gems starting in 1988 with their first 7” of the oft-covered “Parchment Farm” and “Hey Joe,” followed closely by the “Don’t Burn the Fires” 7” and the full-length In The Graveyard. Fred would cut the vinyl masters to nearly Dead Moon’s entire catalog with a birthday present from Toody: the same 1954 mono lathe used to cut the The Kingsmen’s “Louie Louie.”

Over the next couple of years the band released 2 more LPs (Unknown Passage and Defiance) and 2 more 7”s of staggeringly earnest, powerful, beautiful, anthemic songs. Tunes like “Dead Moon Night,” “54/40 or Fight,” “D.O.A.,” “Dagger Moon,” “Walking on My Grave,” and “Black September” cemented the band’s sound and direction and gave them a framework of songs on which to base their tremendous live show. A candle shoved into a Jack Daniels bottle is the lone stage prop and lends the proceedings the feel of some sort of séance or ritual gathering. The group shares an embrace, a cigarette and a beer, and blaze through a set that is at once spiritual and uplifting, angry and defiant, celebratory and fun. In short, it’s everything that rock and roll is supposed to (and sometimes can) be.

As independent and self-reliant as the band is, they obviously couldn’t do it all alone. In 1990 the band began their longtime friendship with Hans Kestaloo, owner of the German label Music Maniac Records. Hans started putting out not only Dead Moon’s new releases in Europe but exclusive live and studio material not found anywhere else. He continues to do so today. He also brought the band over to tour and helped expose them to a bigger, more rabid group of fans than they had at home in the US. First introduced to Dead Moon through Greg Sage of the Wipers, Hans and Music Maniac have, in turn, introduced Dead Moon to many who have become part of their large extended family.

A flood of great music was released through Tombstone and Music Maniac on LP, CD & 7” over the next half dozen years with the band putting out singles on Sub Pop and Sympathy for the Record Industry, as well as tracks on numerous compilations. In 1997 Northwest label eMpTy Records began releasing their records in the States with the great live record Live Mono – Hard Wired in Ljubljana and put out their next two studio records Destination X and Trash and Burn.

While Dead Moon are certainly inspiring as a band they are equally, if not more so as people who live simply and take control of their direction with a kindness and sincerity spoken of by anyone who know them. The Coles’ independent DIY spirit is pervasive in everything they do: their band, their label, the home they built themselves largely using discarded materials, the western town of Tombstone they constructed and which houses their Tombstone Music store as well as their own general store.

Dead Moon’s most recent album, 2004’s Dead Ahead, was released domestically on Tombstone once again. As ever, they remain busy writing, touring the US and Europe, and are looking forward to the late 2006 DVD release of an amazing in-depth Dead Moon documentary entitled Unknown Passage: The Dead Moon Story. Echoes of the Past, is the best of Dead Moon as compiled by rock and roll legend and survivor Fred Cole, and we at Sub Pop are honored to be involved. 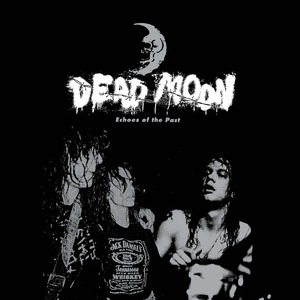 Echoes of the Past