With Tournament of Hearts the Constantines return with a record of desire: songs about nurses and marriage; songs about northern latitudes; songs about work and the weather; songs about loving. Ever gentlemen, this is not the telling after the kissing. These are the secret manifestos, an album heavy with the knowledge that the only truths worth telling are those truths told by lovers. Such truths are fleeting and disordered. It’s best to hurry, and to hurry hard.

Recorded in their hometown of Toronto at Halla Studios with Jeff McMurrich (Sea Snakes, Picastro, Hidden Cameras) Tournament of Hearts is the Constantines third full-length album. It follows two critically acclaimed albums released through Three Gut Records in their native Canada and Sub Pop for the rest of the world: 2001’s Constantines (reissued on Sub Pop in 2004) and 2003’s Shine a Light. We can speak of their passports: the Constantines have toured the US, Canada, Europe and the UK, playing shows with the likes of The Weakerthans, Pretty Girls Make Graves, Lungfish, Don Caballero, The Arcade Fire, Oneida, Broken Social Scene, Modest Mouse, Guided by Voices. We can speak of their festive spirits: happy participants at SxSW, NxNE, CMJ, The Village Voice Siren Music Festival, All Tomorrow’s Parties (LA 2004, curated by Isaac Brock), Montreal Pop Explosion, and, significantly, the Dawson City Music Festival. Truths were revealed on the tundra and by the midnight sun.

Understanding the potentially aggressive northern attitude, Fat Bobby Matador (Oneida), the well-recognized American scholar/rocker who assisted in the making of Tournament of Hearts, was asked his opinion on the Constantines’ role in North American international cultural relations:

The Constantines, presumed to be Canadian by birth and upbringing, are demonstrably so by nature. They were brought to my attention one windless, sweltering July night in 2001. Preternaturally kind and consumed by that northern self-effacement known only to denizens of the Great Refuge, these gentlemen (who were but four at the time, as I recall), spent the better part of a fortnight in the company of the dissolute, oafish company of which I am a habitual member. In that time, their hyperborean selflessness, to which I count myself fortunately impervious, worked its insidious charms on the less guarded members of my companionage. Much as it pains me to confess such perfidy, there were those with whom I had surrounded myself who began to count these Constantines as friends. Perhaps the blame lies with the weak wills of my full-blooded American compatriots, perhaps with the not unadvanced states of inebriated vulnerability in which they not infrequently found themselves, but I am more disposed to direct an accusing finger northward, to hail the very goodness, the despicable bonhomie, of this organization as the true culprit. Indeed, were I not the stern yet true pillar of righteousness that fate has so judiciously deemed me, I too might have succumbed to the jocular, naive blandishments of the invaders; but let it be known that nature has imbued some of her stouter sons with an abundance of iron.

Who, then, were these Constantines? This fearsomely handsome bunch was anchored by a jocular dervish who beat a thunderous tattoo of the crudest rhythms between swigs from his tankard of mead; I reck his name as “Doug,” if memory does not fail. In point of fact, he was not alone in his savagery, although the one known as “Dallas,” who unfailingly stood by his side urging forward the clamor, could not but be described as inscrutable in his countenance, seeming to nod his assent to beat after frantic beat with some enigmatic emotion that lies in the unmapped forests between rage and delight. And then, of course, always in front, the twin-engined, honey-tongued dyad of “Bry” and “Steve” – the lean cobra and the baby eagle, who were yet gentleness encompassed in human form – these two would beseech and declaim what some among us took to be truths and affirmations, although the wiser in our motley crew comprehended the dangers of uncritical capitulation to these enchanting northern sirens. Indeed, as potent as these dangers were at the time, I know from my own experiences that in fact they, then four, were soon joined by a fifth, a whispered name, “Will,” betokening a manifold enhancement of the charms and curses of the outfit’s amiability: a near-wizard, a demi-mage I have seen with these eyes, heard with these ears.

Despite my narrow escape these many years ago, I have since ventured to beard the very den of the Constantines many times, indisputably confident in my unflagging rectitude. Most recently, I bore disinterested witness to a series of incantations and expostulations that I understand were recorded, were in fact intended to result in a document so nefariously appealing, so unvaryingly delightful, that when unleashed upon an unsuspecting public in culmination of a plot most diabolical, those few imbued with the true stuff of iron will helplessly watch the vast majority of their countrymen crumble, felled by the gentle entreaties of those terrible smiling giants, those Constantines. 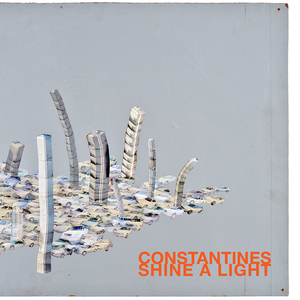