If you walked into a Clarke and the Himselfs show that was already in progress - right off the street, with no previous knowledge to guide you - and if you could hear the show before you were able to see what was happening onstage, you’d probably imagine that it was a loosely tight Lo-Fi N NBC Indie punk style combo, with 4, maybe 5 scruffy teenaged or twenty something members,  like a Kurt Cobain from the Tuvan plains. But when you finally got a visual of a Clarke and the Himselfs live show, you’d be at least a little surprised, and maybe the music would sound even cooler than before you knew… because Clarke is a “One Human Band,” and not in the modern sense where there’s a person onstage doing karaoke with some backing tracks and/or loop pedals. Nope - Clarke (who happens to be a naturally great looking trans woman that somehow manages to be quite glamorous in all her earth-toned T shirt, jeans and hiking boots glory) plays all the actual instruments you hear (electric guitar and drums, but it seems like there’s a bass guitar, too), and sings what often sounds like multiple vocal parts all at once, all by herself, and all live, in real time. It’s kind of like if Hasil Adkins was Brett Smiley, but with a sort of 90s collegiate casual look and some really well crafted songs that are totally grungy, post-psych garage rock and fun. But then what really kicks your ass even more than the world class rock n roll songcraft or the undeniable novelty of the presentation, are the clever and emotionally resonant lyrics, delivered with a no frills sincerity that suddenly lends the experience a kind of Leonard Cohen / Velvets level Gravitas, like when Lou Reed went from writing stuff like “Do the Ostrich” to “Heroin” and “Sister Ray.”

Clarke was a child of the Pacific NW - Boise, Idaho, to be exact. She started making music at the ripe old age of 10, when she unconsciously carried on one of the great Pacific Northwest Rock’n’Roll traditions, one that has been going strong since the late 50s  - learning to bang out a serviceable version of “Louie Louie” on guitar, before any pesky scales or chords can taint your innate Rock purity.

Clarke finally got her own electric guitar a year or so later, and on that very day she formed a 3 piece rock band with a couple of her friends - a drummer (with a cardboard box drum kit!) and a bass player. That band lasted for 5 years - pretty impressive for a DIY Boise, ID tween band, and even more so for the Cardboard Box drum kit!

“That was where I learned how to play rock and roll. When that band broke up, I learned to multi track, and started recording more and more by myself… so I thought it would be funny to call it ‘Clarke and the Himselfs.’ That was the apparent handicap - I had these songs, but still had to form a band to give them a proper delivery, because just guitar and singing didn’t sound at all like the records I was making”

“Then, in 2011, I figured out how to hold a drum stick in my hand in such a way that I could actually play drums and guitar at the same time! It was a moment, not unlike the beginning of 2001 a Space Odyssey! I realized, “I can now properly hold a drum stick in my hand, and so now I can strum the guitar and bang the drums at the same time - and with great efficiency!”

OK - now here is another place we kind of have to invoke Hasil Adkins, the only other One(Hu)Man Band that’s really known at all to any kind of statistically significant number of people, besides Clarke - and the really crazy thing is that, although Hasil and Clarke both adopted (and became quite proficient at) the exact same SUPER RARE performance technique / style /whatever - they did it for nearly opposite motivational reasons!! In fact, one of the best things in the entire Hasil Adkins saga is that he assumed - he just knew - that when Elvis Presley, a SOLO ARTIST - made those records, he was obviously playing everything you heard on the record HIMSELF - or it would have been a BAND! Duh. That says a lot about Hasil. It’s honest, and cute, but a kind of Dunning/Kreuger effect, really. No critical thinking, there - just a totally naive, unexplored belief; the dullest Occam’s Razor could have nipped that in the bud. But Clarke was touring, recording multi-track solo albums, like these:

She was also playing house shows, etc., doing all the things, a lot, trying to find a way to make her shows sound more like the records, a noble performance goal - so she was figuring out all these completely sensible bits of important information towards that obviously worthy end…  she was paying attention, thinking, and learning; learning which completely LOGICAL and/ or sensible action could be taken to positively affect the situation without having to ‘put a band together,’ and, finally, putting all the information together in her head… and then, suddenly - kablam! Good problem solving skills, and even logic are often seen as a totally spontaneous, mystic revelation! And that says a lot about not only Clarke, but about what it means to be human as well! Interesting… I actually produced this single, so I got to spend a lot of time with Clarke - many hours at the studio, quite a few listening to records at my place, and a few driving between those places in Clarke’s Volvo wagon, so I can definitely say that I would expect no less from a person whose idea of relaxing between takes is to play yet another insane round of Lightning Chess against some Russian university professor on brain steroids… Oh, and one more thing… after listening to the final test pressing of this epic new SubPop singles club 45, I think I’m finally beginning to understand just how correct Mary Rae was in her assessment of the situation - for Clarke and the Himselfs, SubPop, and also, I dare say, for each and every one of you whose lives are about to be saved by Rock’n’Roll: Everything’s gonna be just fine. Mary Rae says!

Hear Sub Pop Singles Club Vol. 5 tracks from Clarke and the Himselfs and Guerilla Toss available now at all DSPs 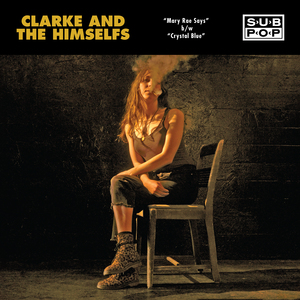