Music is a balm most needed in dark days. Hard times are here, but we are in good hands with three artists who bring us a haunting and healing thing: Dear Companion, music by Ben Sollee and Daniel Martin Moore produced by Yim Yames.

Dear Companion is a collection of eleven songs written by Sollee and Moore (four by Sollee, five by Moore, and two co-writes) that was recorded in only eleven days over five months. The music aches with honesty, longing, and hope. Every song is a fine, perfect creation, and they all hang together to form a true album that can be listened to from start to finish in the same way a rich, layered novel can be read.

And, it’s little wonder. Everyone involved here comes with an impressive pedigree. Classically-trained cellist Ben Sollee infused his much-lauded 2008 debut album Learning to Bend, with his unique synthesis of folk, soul, jazz, and bluegrass, is a member of Abigail Washburn’s Sparrow Quartet, has been chosen by NPR as one of the “Top 10 Unknown Artists of the Year,” and his music has been featured on Showtime’s Weeds. After serving in the Peace Corps, Daniel Martin Moore won over Sub Pop Records in 2007 with an unsolicited demo of deceptively simple, soft songs, and found himself working with producer Joe Chiccarelli (The White Stripes, U2, The Shins) on his first album, the 2008 release Stray Age. With Stray Age, Daniel became a critical darling, eliciting comparisons from Nick Drake to M. Ward. And the album’s producer, Yim Yames, renowned guitarist/singer/songwriter from Monsters of Folk and My Morning Jacket needs little in the way of further introduction.

Dear Companion was born when Sollee stumbled upon Moore’s music on Myspace. When they finally met, Sollee says it was apparent “there was a strong connection.” Both singer-songwriters were especially united in their concern about mountaintop removal (MTR), a form of coal mining that is devastating the land and culture of Central Appalachia. “This is a human rights issue. There are a whole bunch of folks who are being forsaken and mistreated—-literally poisoned,” Moore says, referring to the widespread pollution that is a result of MTR. Those defending the use of MTR are primarily huge corporations with bottomless pockets fighting against grass-roots activists and artists who have little more than words and music on their side.

But Moore and Sollee know the power of words and music. They set out to create a five-song EP that would raise awareness about the issue. When Yames, also an outspoken opponent of MTR, came aboard at Sollee’s invitation, he knew that the friends had something special, so he suggested they expand the project to a full album.

The result transcends the issue while also illuminating it, as well as the culture of greed, consumption, and apathy that has invaded the nation. While the theme might be dark, the music is not. Every song is shot through with light—-and hope. “We wanted to look forward in anticipation of brighter days that are sure to come,” Moore says. The friends are also putting forth these songs not in the spirit of laying blame for our current problems, but in the hopes of contributing to a solution. “We’re using our music to say, ’We’re all in this together, we’re all participating, let’s change things,’” Sollee says.

“My Wealth Comes to Me” and “Something, Somewhere, Sometime” provide perfect harmonies that showcase the unity of the friends’ spirits and voices and bring to mind comparisons to their fellow Kentuckians, the Everly Brothers. There is the slow boil of “Try” and the understated yet powerful loveliness of “Sweet Marie” (centered on a profound orchestral movement composed and arranged by Sollee). “Dear Companion” is a fusion of mountain music and rock, driven home by Moore’s mourning, urgent vocal. Woven throughout are the completely original stylings of Sollee’s cello and the masterful guitar-playing of Moore (showcased most prominently on “Flyrock Blues,” a song that proves a protest song need not be shouted). “Only a Song” is a subtle take on the power of standing up for what you believe in and the instrumental “Wilson Creek” conjures up the peace of an Appalachian holler with its abrupt finale suggesting the threat of destruction on the horizon. Another instrumental, “Flyrock #2” seems to be a soundtrack for not backing down, even in the face of huge opposition.

All in all, Sollee and Moore provide a soothing and enlightening album. Most of all, these songs are packed with that most important and enduring ingredient that all great music must have: emotion. It’s there in every note sung, in every cello string sawed, in every guitar string strummed. Listening to songs like these reveals the power of art to shed light, to begin the process of change and healing. “Music is among the more life-affirming things in all of creation,” Moore says. If anyone needs a reminder of that, all they need do is listen to Dear Companion. 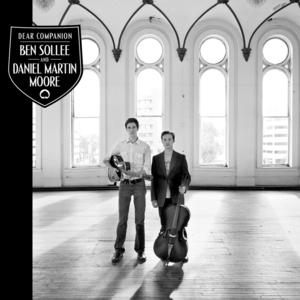