4 Years ago, in the Peach state of Georgia, there was a mighty green Conifer tree whose limbs were wider than the smile on the sun. From this tree hung many a seed. The tree was home to so many creatures big and small. The most fun of them all was perhaps MR. BIRDSONG. Mr. Birdsong was a single white dove known for his beautiful voice and powerful wings. Sometimes, Mr. Birdsong would be so lost in song and dancing that his wings would knock loose one of the Pinecones! The armored seed would then whoosh toward the ground and sometimes break open on the forest floor below. But you see, it’s very dangerous when this happens. For inside each pine cone on the mighty green tree lies all of the possible decisions a living person can make! And, luckily, in these seeds on that particular day was the possibility that 4 lifelong friends would decide to form an eternal union founded in sound. Arbor Labor Union was born! Their roots immediately began to burrow deep into the earth (some say towards the ear of Pythagoras!). Most trees in the forest try to grow fast. Many trees’s desire is to race one another to the clouds and back. These four trees, however, are growing slowly together. They know beyond every cloud is a radiant, true blue sky and they aim for no less than the cosmos! No one knows which one of the four spoke first. Mr. Birdsong was there and he swears that they all spoke in unison. He sings about it like this:

“Listen now!
O! dear listener
For what I sing is True
Out from the sound of song forest
4 trees sang I AM YOU”

The trees are still singing in unison today. Most recently the song they could be heard singing has been said to sound like this:  “IHer Yu! Ihear u! Iher YOU!”

New Initiate, you must be ready to find these young trees! For those of you who have received this message in full I have included a map below: 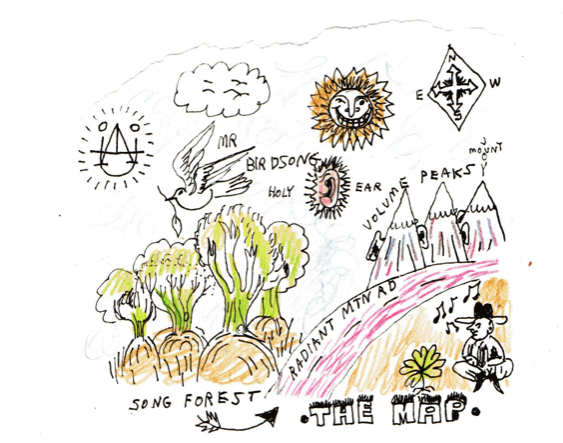 In the case that your map gets stolen, I am sorry. It looks as though you will have to hear your way there. Remember these instructions- if you press your ear to the ground you will find that it too has a sound… and it sings:

“Past the VOLUME PEAKS
And down the RADIANT MTN ROAD
Past the Palace of Sleeping Songs
And the meditating toad
It is there that you might find
Four trees singing so divine
I HEAR YOU I AM YOU
And together we shall shine!”

The bond of music is resounding. And to add more lava to the volcano of song should be sin. For it is known the world could use some silence. But the Arbor Labor Union is still growing in agreeable song. Toward the planets. Toward the Polestars. And toward the People. We are adding bricks to our Tower of BABEL. We are building our song up to Heaven. For belief in an honest sound is BELIEF’d among us. Take the SILENT OATH. Look no further. You have arrived for you have been here all along.

We are your banner men. The image on your flag is written in our hearts. It shall be done, for it is already accomplished.

Place Your Forehead to the Digital Communication Device screen (Cellular Phone, Computer, Television) before You Close Your Eyes. Do this Completely and Absolutely. It is Important that the Reader Now empty Their Mind to the best of Known Ability. Chant the following Haiku until Your Mouth no longer Tastes like the Alphabet;

First:
The World is dying.
It has been.
It can be seen.
And it can be felt.

The World WITHIN is the Sum Total of an individual, Experiencing the World WITHOUT through the many Senses. It is the Holy of Holies. Every individual is Holy and has something WITHIN that is so incredibly special and significant to Give to, and be Experienced by, the World WITHOUT. But WITHIN must be cared for, as One tends to a Garden. WITHIN must be Alive. If it is not cared for, if it is not Alive, what can be Alive WITHOUT You? You must make the effort to Form a Living Union WITHIN. And then, You must make the Effort to Unionize Your Labor WITHOUT.

The Arbor Labor Union is just such an Effort. It is four individuals WITHIN the WITHOUT, and the Past, Present, and Future crew of the Planetary Defender, Starship IHU.

The Starship IHU seeks the Necessity of All. It is a Music-Generating Machine created by, and giving birth to, the Arbor Labor Union. Its Labor begins with the Sense of SOUND, for All is Senseless WITHOUT SOUND. That is, WITHOUT SOUNDNESS, which is the SOUNDNESS WITHIN. The Music its crew generates is about Music. It is about Hearing the Music. And It is about Hearing the Other. And That is All. In doing so, the Music asks the Listener: do You Hear It? does It Hear You? is Your Self Being Heard?

If You Hear the Music, then You will Hear what is SOUND. There is a Place for Your Self Being WITHIN the IHU, a Place that will reveal that which is WITHOUT You, a Place which longs for the Experience of Your Sum Total.

You are on a planet which is the World. And There is a Labor to be Done. What Labor must You Do? What is the Great Labor that calls to You?

There is always a Labor to be Done, but it does not have to be Done Alone. There are Others, even Now. Know Your Self Being. Then Know the Others. Then Unionize Your Labor.

As is Said:
JOY OR DIE

Dear Reader Listener Initiate:
You have found Us.
For You have been with Us All along.
I Hear You.
As Do We.
We are Your Banner Men.
The Image on Your Flag is stamped upon Our Hearts.
The Labor shall be Done.
For It is already Accomplished.

NOTE ON MAP OF PREVIOUS TRANSMISSION: It dates back to a Time when the World did not wish to die. WITHIN nor WITHOUT. It directs a Way to be Alive. It is complex in its simplicity and must be understood as such. 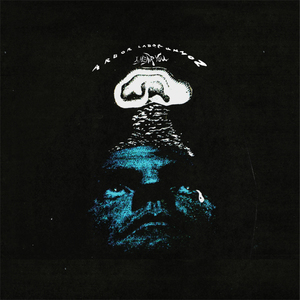