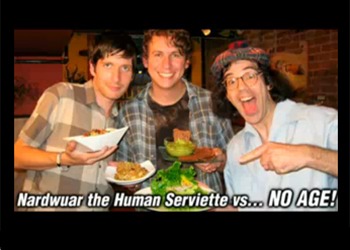 Ever wanted to know what No Age has in common with 2 Live Crew? (Not much!) Curious about what food both Lenny Kravitz and No Age enthusiastically endorse? (Parisian Falafel!) Still can’t figure out if No Age actually did perform a Nirvana cover at SP20? (They didn’t!) Dean’s the drummer, right? (Yes!)

Find out these things and so much more in Nardwuar the Human Serviette’s interview with No Age!

Nardwuar interviews No Age at Gorilla Food in Vancouver, BC, Canada! 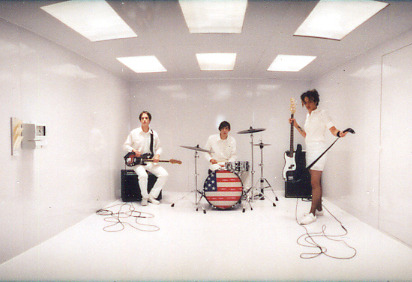 In August of 2006 our pals in The Thermals released their most recent, most excellent and most critically-beloved album, The Body, The Blood, The Machine. It very deservedly wound up on year-end lists far and wide (Pitchfork’s Top 50 of 2006, _SPIN_’s top 40 of 2006, The Onion’s Best Music of 2006, and both NPR’s Best CDs of 2006 and their Overlooked 11 of 2006, amongst those). And now they’re hosting MTV2’s Subterranean, this Sunday night, January 7th (or, technically, very early on Monday, January 8th) at 1:00 am! Not only will you be entertained, charmed and possibly aroused by these Thermals, but you will have the opportunity to see their totally bitchen video for the song A Pillar of Salt!

Plus, this very same episode of “Subterranean” will feature the new video for The Shins’ Phantom Limb AND the video for Band of Horses’ The Great Salt Lake!