On April 7th, 2023 the inimitable, enduring, one and only Mudhoney (vocalist Mark Arm, guitarist Steve Turner, bassist Guy Maddison, and drummer Dan Peters), will release their latest and greatest, Plastic Eternity, on Sub Pop. 2023 is the 35th anniversary of both Mudhoney and Sub Pop, and an incredible new album by the label’s flagship band is the perfect way to mark the occasion (well, that, and with an update on the progress of the sewage tunnel boring machine bearing the band’s name…).  Recorded over nine days at Crackle & Pop! in Seattle, WA with longtime producer Johnny Sangster, Plastic Eternity is a heady run through all the proto-genres of guitar rock with a keen eye on the inanities of the world in the 2020s.

Mudhoney has shared an official video for Plastic Eternity’s first offering “Almost Everything.” Frontman Mark Arm says the song “was originally known as ‘Gopal.’ It had been sitting in the recording device at our practice space for years and we avoided erasing it because we always loved its swinging Escalator groove.” Directed by Arturo Baston, the visual for “Almost Everything” is a surreal and interdimensional journey of a character that never stops transforming. You may even transcend the limits of space, time and form yourself while watching this video! WATCH NOW.

Mudhoney has scheduled a 14-date, Australian tour beginning Friday, April 14th and ending Friday, May 5th, 2023. The late-spring spring run will include shows in Byron Bay, Brisbane, Canberra, Melbourne, Adelaide, Perth, and more. Additional dates for non-Oceania fans and followers to be announced in the coming months. Please find a current list of dates below.

Plastic Eternity is now available for preorder on CD/LP/CS/DSPs from Sub Pop. LP preorders from megamart.subpop.com, and select independent retailers in North America will receive the limited Loser Edition on “shiny gray matter” vinyl. In the UK, and in Europe the Loser Edition will be available on silver vinyl (both editions available while supplies last). There will also be a new T-shirt design available.

Even More On Mudhoney’s Plastic Eternity:
The world is filling up with trash. Humanity remains addicted to pollution despite the planet getting hotter by the minute. People are downing horse dewormer because some goober on television told them it cured COVID. Tom Herman of pioneering avant garage band Pere Ubu still doesn’t have his own Wikipedia article. The apocalypse, it seems, is stupider than anyone could’ve predicted.

Fortunately, the absurdities of modern life have always been prime subject matter for Seattle-based band Mudhoney. The foursome take aim at all of them with barbed humor and muck-encrusted riffs on Plastic Eternity, their 11th studio album.

Mudhoney (vocalist Mark Arm, guitarist Steve Turner, bassist Guy Maddison, and drummer Dan Peters) remain the ur underground group, their gnarly primordial punk stew and Arm’s sharply funny lyrics as potent a combination as they’ve been since the band’s formation in the late 1980s. From taking on climate change from the perspective of the climate if the climate tried to play guitar like Jimi Hendrix (“Cry Me An Atmospheric River”) to a driving rock and roll song about taking drugs meant for livestock (“Here Comes the Flood”) to a classic punk attack on treating humans like livestock (“Human Stock Capital”), Plastic Eternity is a heady run through all the proto-genres of guitar rock with a keen eye on the inanities of the world in the 2020’s.

The recording of Plastic Eternity delivered several firsts for the band. With Maddison planning on moving his family to Australia, Mudhoney was forced to work on a deadline, booking nine days at Crackle & Pop! in Seattle with longtime producer Johnny Sangster. Since the pandemic had made it impossible for them to convene in their practice space for nearly a year and a half, this meant they were going in to make a record with an assortment of half-forgotten riffs and nascent ideas rather than fully-fledged, well-rehearsed songs.

This was unusual for a band used to writing songs by “standing in a room and looking at each other and playing,” says Arm. “We had the time and space to think about things as we were doing them, and to make a kind of course correction—to use a fucking terrible cliche.” They built “Flush the Fascists” around a looping synth line, broke out a harmonizer on two tracks, added a vocoder to “Plasticity,” and even created a protest song out of a spontaneous jam on “Move Under,” the chorus of which Arm calls “something the Runaways might have come up with if they were us.”  “Undermine the foundations/ Of the lies that they repeat,” implores Arm on the chorus. “You gotta move under/ Until it all comes down.”

Plastic Eternity also marks the first time Mudhoney has given writing credit to anyone outside the band, thanks to Sangster, whom Arm calls “a brilliant musician and way more adept at musical theory than any of us,” stepping in at times to offer advice on where the songs could go.

Also unusual for Mudhoney: Plastic Eternity contains two genuine love songs. The first is for the aforementioned Tom Herman, one Arm’s favorite guitarists and the protagonist of “Tom Herman’s Hermits.” Then there’s closing track “Little Dogs,” a paean to the simple joys of hanging out with tiny canines, and one in particular: Arm’s Pomeranian, Russell, whom he couldn’t bear to give up after fostering him, sure that any other owner wouldn’t allow the little fellow to “let his freak flag fly.” No irony here—just gratitude to a little pal in dark times.

So it seems, despite its mordant delivery and crusty exterior, Plastic Eternity is not just a rebuke to the constant attacks on our intelligence and our planet—it’s an ode to the connections we make with other living beings. What is the persistence of Mudhoney but a testament to that? When asked why they continue making records nearly four decades after forming, Arm’s answer is simple.

“We like each other and we like being in a band together,” says Arm. “Some people have poker night or whatever the fuck, and they have the excuse to get together with their friends. For us, this [band] is that. This is what we do.” 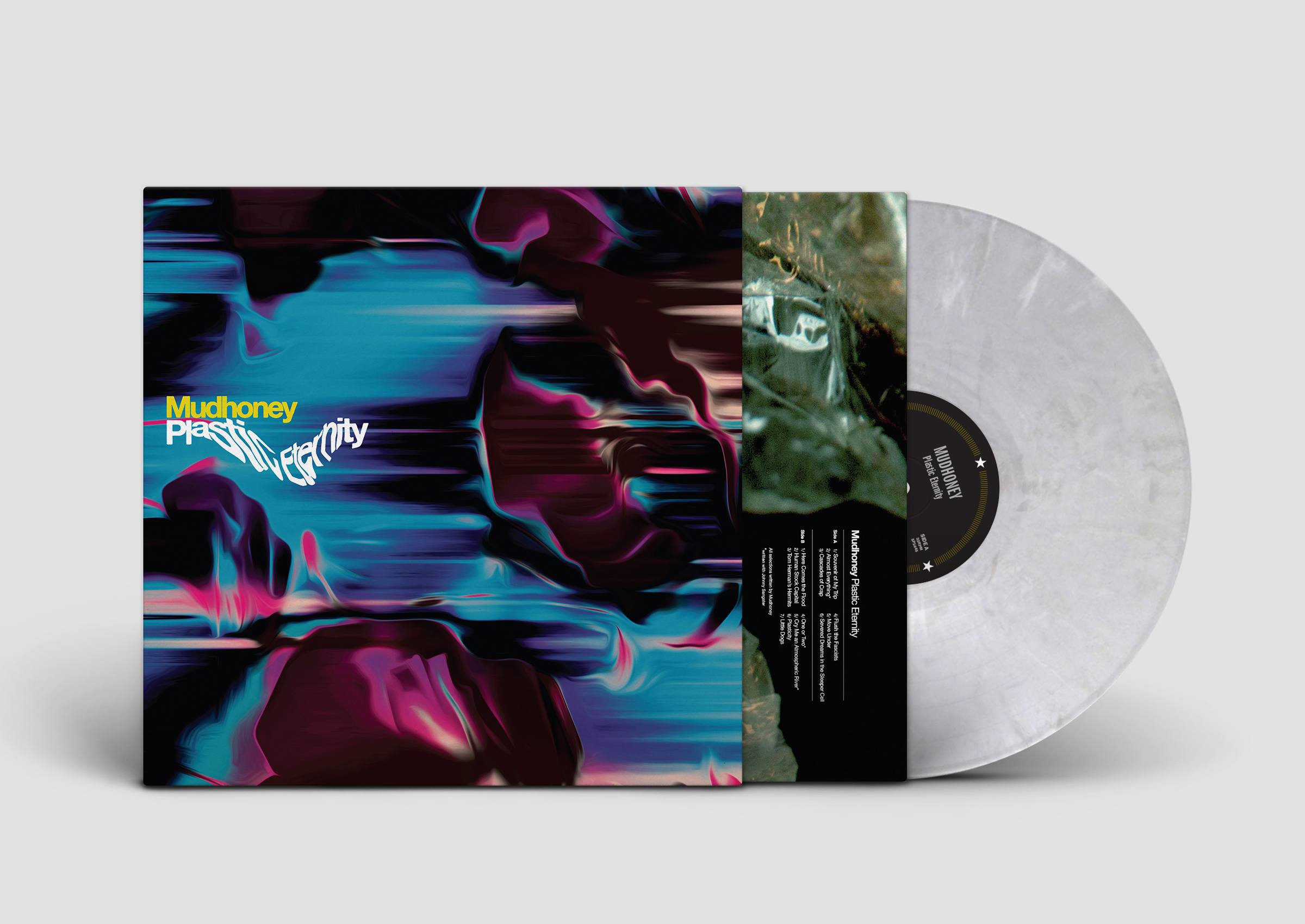 Tracklisting:
1. Souvenir of My Trip
2. Almost Everything
3. Cascades of Crap
4. Flush the Fascists
5. Move Under
6. Severed Dreams in the Sleeper Cell
7. Here Comes the Flood
8. Human Stock Capital
9. Tom Herman’s Hermits
10. One or Two
11. Cry Me an Atmospheric River
12. Plasticity
13. Little Dogs