Hot Hot Heat’s Make Up The Breakdown: Deluxe Edition is the newly remastered and expanded version of the group’s breakthrough full-length and will be available again on vinyl, just in time for the 20th Anniversary of its release, on Friday, December 2nd, 2022 from Sub Pop.

Make Up The Breakdown was produced by Jack Endino (Nirvana, Soundgarden, Sonic Youth) at Vancouver, BC’s Mushroom Studios with additional engineering and mixing from former Death Cab for Cutie member Chris Walla at The Hall of Justice in Seattle, and released on October 8th, 2002 as a ten-track album.

For this deluxe edition, Make Up The Breakdown has been expanded to twelve tracks and now includes “Apt. 101” and “Move On,” two tracks only previously available with a UK-only single for “Bandages.”

Make Up The Breakdown earned praise from the likes of AllMusic, who called the album “an addictive, densely packed pop gem that ranks among 2002’s best albums,” and Pitchfork agreed, including it at no. 20 on “The 50 Best Albums of 2002.” The official videos for “Bandages” and “Talk to Me, Dance With Me” saw regular airplay on MTV. Meanwhile the singles saw huge support at Alternative Radio, with both songs going to no. 1 at the KROQ in Los Angeles.

Make Up The Breakdown: Deluxe Edition is available now to preorder from Sub Pop. LP preorders from megamart.subpop.com, select independent stores in North America, the U.K., and E.U., will receive the limited Loser edition on yellow vinyl.

More on Make Up The Breakdown…
To be lost and naked in the city one time is an embarrassment, a mistake  not to be repeated. Lost and naked in the city, again - that is a lifestyle, a conscientious series of decisions that leaves one vulnerable to all the dizzying highs and brutal hangovers that come with being ready to transcend the limitations of a small town or a parochial punk mindset or just years upon years of repressed self-loathing. Or, as Hot Hot Heat singer/keyboardist Steve Bays puts it, “leaving the womb of teenhood and having no idea what to do with all that freedom.” This is what Make Up the Breakdown sounds like because this is what it was like to be in Hot Hot Heat.

This is not a phase of one’s life that can be recreated or even revised; even Bays admits that he had to shelf his fully digitized, “re-envisioned” and technically “better” version of his band’s beloved debut out of respect to its fans. But to hear these songs again and remember is even more powerful with the wisdom of distance, to recognize the little pivots that, unbeknownst at the time, changed everything. If Bays isn’t offered a solo deal after uploading crude solo synth-pop songs to Napster, Hot Hot Heat are only remembered as one of the many promising DIY bands in Victoria, British Columbia that broke up before anyone could take them seriously. If Dante Decaro fails to hold his liquor during one fateful Victoria house party, he never meets Bays; instead, Decaro and Paul Hawley stay up until 1 PM the next day playing Beatles covers and Hot Hot Heat’s classic lineup becomes solidified. If Dustin Hawthorne doesn’t play his bass through a crushingly loud Sunn amp or if they can afford a decent PA, Bays doesn’t develop a high-wire yelp that can cut through the noise. If Sub Pop A&R Tony Kiewel doesn’t hear the band’s name in a coffee shop the day before Bays sends an unsolicited email, Hot Hot Heat are rejected from every indie label that got their demo. If Bays’ mother doesn’t unexpectedly advise him to follow his dreams and sign with Sub Pop, he takes a desk gig as a creative director.

The precariousness of Hot Hot Heat’s existence extended to the creation of Make Up the Breakdown itself. If Bays doesn’t have a pen and a cocktail napkin while riding the ferry to Mushroom Studios, the lyrics to “Get In Or Get Out” never get written. If producer Jack Endino doesn’t insist that they record “Bandages” first, Bays probably changes the hook and writes a second verse that robs their hit single of its unstoppable momentum. If the band brings their beloved Juno-6 synthesizer, they never get a chance to use the creaky Hammond organ responsible for their most recognizable riffs - the ones that earned them countless critical comparisons to the excitable, angsty new wave of The Cure and Elvis Costello and XTC, rather than West Coast art-punks like The Locust or The Rapture and Modest Mouse that they are listening to and partying with.

Hot Hot Heat stayed true to Hawley’s initial conception of the band - “we can make pop music, but we have to screw it up in some way.” Their past incarnations as hardcore, death metal and second-wave emo found subtle ways to emerge throughout an album that aspired to be Victoria’s Help!. In the past, “the goal was to never play a chord progression that had been played before,” and that melodic ingenuity manifests in the whiplash key change on the chorus of “No, Not Now.” As Bays described the Victoria straight-edge hardcore milieu, “if the crowd’s not moving, you’re not a good band.” The same principles inform the arm-flailing rhythms of “Save Us S.O.S.” and “Talk to Me, Dance With Me.”

Over the next two years, Hot Hot Heat went from playing to seven people in Boise to festival crowds of 50,000; being lazily compared to Robert Smith to sharing backstage jokes with Robert Smith about those comparisons; learning multi-track recording on the fly to spending $350,000 in a Los Angeles studio to complete 2005’s Elevator; getting added to BBC Radio 1 and almost immediately banned because the mass delusional hysteria of the Iraq War led grandmas in the UK to believe “Bandages” was endorsing state violence. But to describe Make Up the Breakdown as an “instant classic” is flattering and misleading - nothing was preordained about its success or its resonance, and from the first grinding, giddy notes of “Naked in the City Again,” Make Up the Breakdown is reanimated with the blind, beery exuberance that set them apart from the urban ennui and wasted elegance that would come to define the “New Rock Revolution” of the early 2000s.

Though they shared the same stages and magazine covers as The Strokes and Interpol and the Libertines and the Killers, Hot Hot Heat made for convincing underdogs, the people’s champs - what could born rock stars know about the catastrophic romantic rejection of “Oh Goddamnit” or the crippling small-town angst of “Get In Or Get Out”? Though Victoria was largely marooned and could only absorb the essence of the indie scenes in San Diego, Vancouver and Seattle, it’s a microcosm for the widespread culture clashes playing out in Make Up the Breakdown.

The past 20 years has flattened the narrative of the early 2000s - one day, it was all nu-metal and rap-rock and goatees and the next, skinny boys from New York and the UK in tight jeans playing tighter songs about sex, drugs and druggy sex (or sexy drugs). Make Up the Breakdown told the truth about those caught up in this awkward growth spurt - cross-armed, straight edge kids were now going out to the bars, trying to get laid, unironically enjoying pop and causing all manner of romantic and idealistic conflict. As much as Make Up the Breakdown was slice-of-life scene reportage, Bays intended it as trenchant cultural criticism - “I was getting tired of the in-fighting and small town mentality,” he recalls. “If you don’t like your hometown, leave and I bet you’ll find the same problems wherever you land. You gotta find your peace.” Most likely, you will find it drunk and naked in the city again - again.

Praise for Make Up The Breakdown:
“Every step of the album is a joyously bold, emotionally rounded one all of which betrays a cleverly veiled melancholia. From ‘Get In Or Get Out’’s crypto-jazz keys to the cowbell-driven studied cool of ‘Talk To Me, Dance With Me’, it’s a record that shakes all preconceptions from the tree, and should be talked about in hushed tones by self-congratulatory, music aficionados 20 years from now.” ★★★★ ½ - NME

“Crucially, Hot Hot Heat have also learned the art of the three-minute pop song. Make Up the Breakdown zips by in a giddy blur of taut punk-funk grooves and insanely catchy choruses. Highlights such as ‘Bandages’ and ‘Get In or Get Out’ sound like lost classics buried in 1982 and only recently disinterred.” ★★★★  - The Guardian

“The Victoria, Canada, quartet’s debut LP is one long indie/new wave rave-up, all spring-loaded guitars, stabbing organs, and footloose drums…the band bashes into every chorus like they’re smacking a pinata full of blood and chocolate (8/10).” - SPIN

“This frenetic foursome from Victoria, Canada, presides over a colossal jousting match between synths and guitars that is liable to leave its audience breathless…With Steve Bays’ faux-tortured vocals (Robert Smith on antidepressants?) providing the narration, listeners might want to rage, or they might want to disco. Or maybe both.”  ★★★ ½ - Los Angeles Times 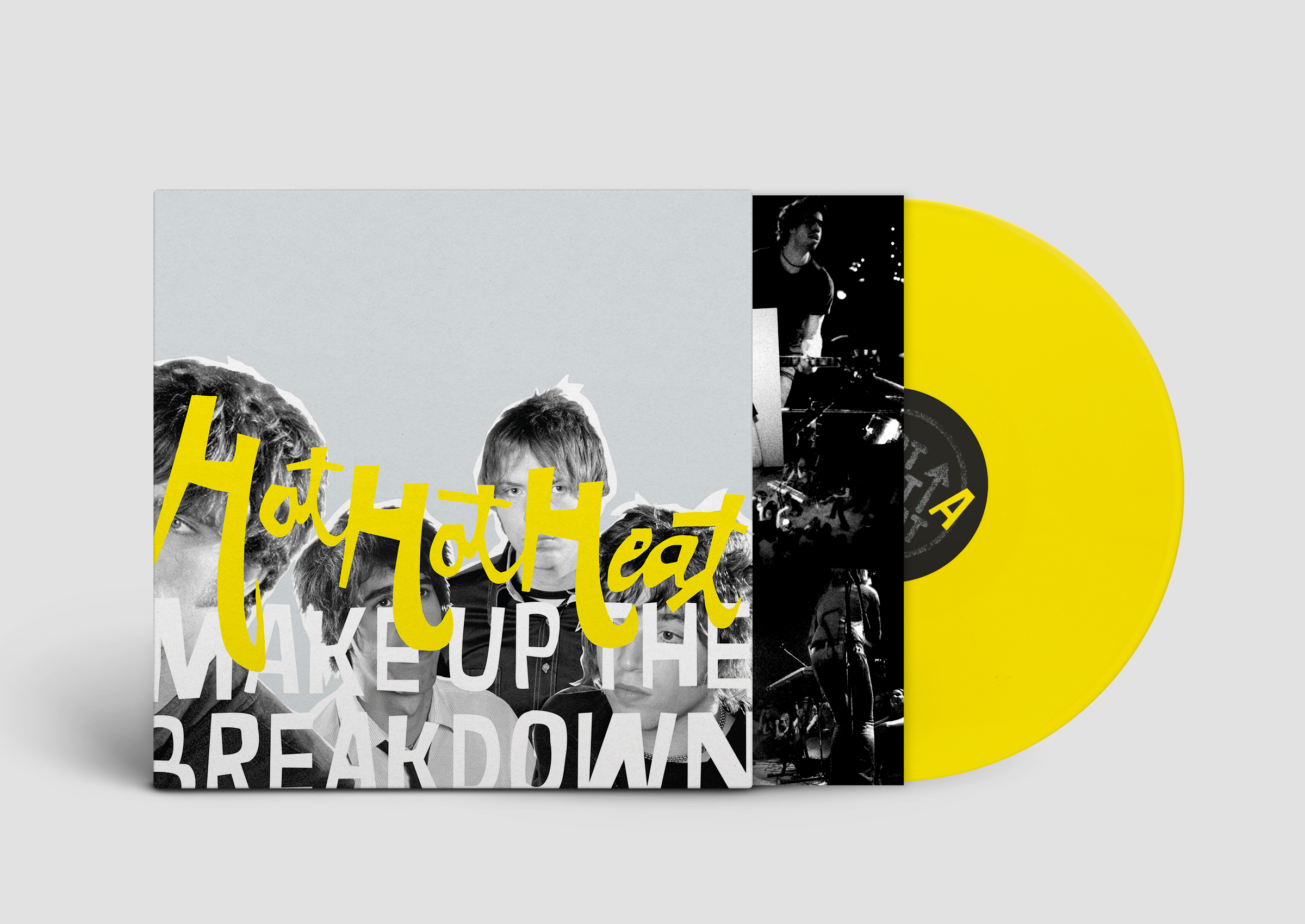