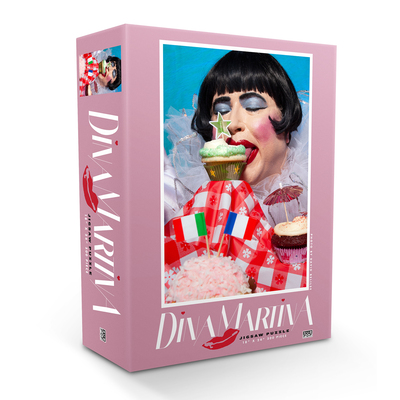 “Dina Martina is hilarious like no one else I know!” - Graham Norton

Welcome to the world of Dina Martina, the tragic singer, horrible dancer and surreal raconteur who has now signed with Sub Pop Records to release new material sometime in the near(ish) future! Today we’re celebrating this puzzling news by releasing a limited-edition jigsaw rendering of Dina’s face area (aka a puzzle).

Dina says of the announcement, “I cannot express how excited I am about this new endeavor with Sub Pop Records & Tapes. And the PUZZLE! Talk about WOW! For me, this puzzle represents so many things - which, again, I cannot express. This puzzle reminds me of my life: in pieces. But unlike life, all of the puzzle pieces are there. Thnak you.”

The Seattle-based Dina Martina has been in our orbit for some time, having originally released material through Sub Pop-affiliated Up Records, and making us laugh with her various holiday shows over the years. We’re longtime fans and thrilled to release her music (and novelty items). Please give us a warm hand in welcoming her to the label!

Absolutely packed with ludicrous songs, horrifying stories and overburdened costumes, Dina Martina’s shows are impossible to adequately describe, other than that they’ve become synonymous with jaw-dropping pathos and mind-blowing comedy. Dina Martina has been hailed as “divinely funny” (Time Out London), “painfully funny and demented” (Seattle Times) and “the most original drag performer working in America today” (Village Voice). What a Dina Martina show is, quite simply put, is a smart and hilarious evening of entertainment that you will never forget.

Dina Martina’s shows in the U.S. and abroad have wowed the likes of John Waters, Bette Midler, Graham Norton, Kim Gordon, Whoopi Goldberg, Matt Stone, Jennifer Coolidge, and many others. Martina has received The Stranger’s Genius Award for Theater, three Seattle Times Footlight Awards, as well as nominations for the Alpert Award in Theater, a SPIT Award for Best Solo Show, and two GLAAD Media Awards for Outstanding Off-Off Broadway Theater. She did not win those.