Following on from the release of their critically acclaimed second album, Sideways To New Italy, earlier this month on Sub Pop, Rolling Blackouts Coastal Fever return today with the video for recent single ‘Cameo.’ One of the record’s anthemic high points, ‘Cameo’ begins with open guitar strums and Fran Keaney’s lone voice before building to a swirling roar, showcasing a band at the peak of their powers both instrumentally and lyrically.

The accompanying video - directed by Nick Mckk - finds the band in a particularly playful mood as they perform in a dimly lit club, sporting turtlenecks in the glare of spotlights and bursting through walls on office chairs. Look beyond the hi-jinx, however, and there’s romance afoot here, perfectly in keeping with the glistening love song at ‘Cameo”s core.

“We made this video with Nick Mckk, who shares our vision for the earnest and the absurd,” explains Keaney. “This is our first video to feature skivvies, a wall of cardboard boxes and a human-powered rotating stage.”

“Fran had the idea to separate each body part playing, disembodied like the famous Queen artwork,” says Mckk. “I think it was Tom who really wanted to dress like Molloy, the cat burglar from The Simpsons. White sneakers, black pants and a turtleneck. I was very for this.

“Because I’m a fool and I don’t know how to work a gimbal (stabiliser), I ended up shooting a lot of the clip on rollerblades, which let me zoom around the spinning stage. Set Designer Grace Goodwin and I created the big bricks that the band could smash through, representing the disintegration of memory and the rebuilding of recollection. I mean, it was that for me, I can’t speak for the band!” 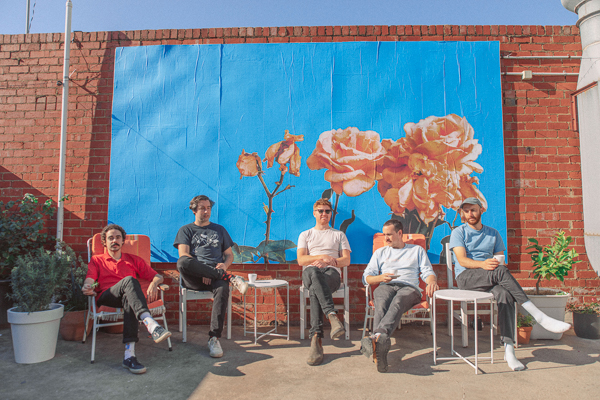 Earlier this month, the band announced a big run of UK and Ireland tour dates for March 2021, including their biggest ever headline UK show at London’s Shepherd’s Bush Empire on March 5th. Main support on all dates [excluding Dublin] comes from the hotly-tipped Dutch quartet Pip Blom.