“I feel like it’s our largest album,” says Rolling Blackouts Coastal Fever’s Fran Keaney. “It’s us stretching out. I think it’s the album we’ve always had in us.”

Since releasing their debut EP Talk Tight in 2015, the Melbourne-based five-piece have been chewing through stages across the world at a frightening clip. Early 2020 saw them gearing up once again – putting the finishing touches on second album, Sideways to New Italy, and prepping for another international tour. Instead they were caught in the longest Covid-related lockdown in the world.

“All our touring was amazing,” says Tom Russo, who along with Keaney and Joe White make up the band’s trio of guitar-playing, singer/songwriters, rounded out by bassist Joe Russo and drummer Marcel Tussie. “It’s also sensory overload and a bit chaotic. So it went from that to the complete opposite – sensory deprivation. We were basically in a bubble.”

With no shows to support Sideways to New Italy possible, the band had little to do but sit at home. “I was spending all my weekends building stuff on Garageband,” says Keaney. “Writing without having any sense anybody would listen to it.” Soon experiments wandered: a synth line here, a disco vamp there. Files were traded – weird ideas without parameters included. Without realising it, the group’s signature sound of rushing acoustic guitar, motorik drums and sparkling pop hooks was being subtly shifted into a new era.

“We knew we wanted to expand our sound,” says White. “But we didn’t know if anything was going to work until we got together.”

When lockdown momentarily lifted at the end of 2020, the band and long-time engineer Matt “Chow” Duffy legged it to “The Basin” – a lakeside, mud-brick house in regional Victoria the Russo extended family built in the ‘70s. With the building’s high-ceilings and rural setting encouraging a huge live sound, the reunited members spent two weeks figuring out what they had. “It had been such a long time coming,” says White. “But the spark happened and we thought, ‘Yep, this is gonna work, great.’ Then it was time to get excited about making a record.”

Back in Melbourne the band set about finishing the record on their own, working through months of lockdown restrictions, trial and error and the isolation of a post-pandemic world.

“A lot of my ideas came from endlessly walking around the same streets of West Brunswick” says Russo. “But I was also kind of liberated by that - my mind wandered into places it wouldn’t otherwise have. Then when we finally got to recording in the country, the ambience seeped in. We ended up including field recordings of fire, rain and bird sounds. Then we finished it ourselves back in our Brunswick practice space.”

The result is Endless Rooms, the band’s most cinematic, stylistically diverse and ambitious album yet. Self-produced by the band with Matt Duffy, and mixed by Scott Horscroft (DMA’S, Silverchair, The Presets), Endless Rooms pulls back the curtain on what Rolling Blackouts C.F. can achieve, revealing a wider screen, deeper narrative currents, more confident shades, and an excitement at letting their tumbling brand of ragged, nervy pop wander and breathe.

It’s in the mid-tempo mirror ball groove gurning under an enormous frazzled lead guitar hook on ‘Dive Deep’, the melancholic choruses that blossom in ‘Caught Low’ and ‘Blue Eye Lake’; the glittering midnight sheen of late night driving anthem ‘Vanishing Dots’; and the celestial organ and glockenspiel that has closer ‘Bounce of the Bottom’ unspooling into a buoyant, life-affirming earworm.

“After three albums and a couple of EPs in, I think we back ourselves now,” says Russo. “We push each other to make the songs stronger. And if a bit feels lazy, it doesn’t get past anymore. We started as a bedroom songwriting project, but at heart we’re a live jam band. With this record we tried to capture that live expansiveness.”

With confidence in their lush, feelgood explosiveness the ever reliable anchor, Endless Rooms also has the band venturing into choppier waters.

If 2018 LP Hope Downs was looking for certainty in the face of the void and 2020’s Sideways to New Italy was looking for a sense of home within the dislocation of relentless touring, Endless Rooms was intended as the band’s “anti-concept record.” But the realities of living in a nation grappling with era-defining bushfires, a conservative government, lockdowns and the ongoing reverberations of living on stolen land, provided a prickly counterpoint.

“We’re not known as an angry band,” says Russo. “But there’s a decent amount of things clearly wrong in this country that permeates some of the songs. It was unavoidable with everything happening.”

See the propulsive ‘Tidal River’ invoke the spectre of Australia as the “lucky country” – and the self-entitlement and ignorance it inspires: “Jetski over the pale reef / chase the pill for some relief / as long as you don’t point out / what’s underneath your feet.” In fizzing first single, ‘The Way it Shatters’, White sings, “It’s desolation by rote / all around your home / if you were in the boat / would you turn the other way?” – a nod to those who, “ride their luck on the fact they were born here, so think they’re entitled to it.” Keaney’s gorgeous ‘Bounce off the Bottom’, casts the paranoia of “guarding the roses” under indigo skies, as bushfire smoke rolls through the city and the nation distracts itself online. It’s there again in Russo’s ‘Saw You at the Eastern Beach’, a wiry, barnstormer that stitches snapshots of dilapidated boardwalks, lights from petrochemical factories, and grumbling pub drunks into a tale of a “two team town” lurching blindly through history.

“It feels like such an uninspiring time, even in the wider uninspiring time of current Australian reality and politics – things are literally burning,” says Russo. “But then there’s change happening at the grasroots level. And the majesty of where we’re fortunate to live. There’s a circular nature to that – the tidal river. We’re not cynics, but we’re trying to push for some hope in the current landscape.”

It’s that hope that’s seen Rolling Blackouts C.F. join an Australian lineage of bands bold enough to marry the country’s evocative landscapes with the urban romance, passions and politics of its characters. Matched with a worldly perspective afforded by constant touring, the whiplash of it coming to a halt, and the inherent longing in trying to make sense of it, Rolling Blackouts C.F. have unlocked their most compelling artistic statement yet.

“We were almost going to call this album self-titled,” says Russo. “But we called it Endless Rooms because we work best thinking of each song as its own bare room or universe to build. Somehow, it all hangs together.” 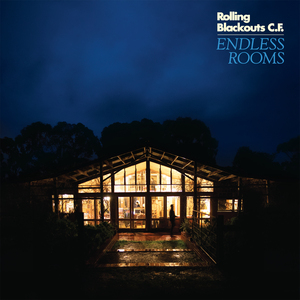