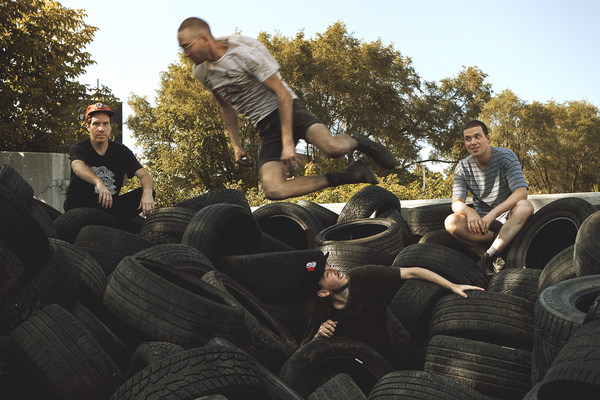 Please join us in welcoming Corridor, the Montreal-based, Francophone-band that will release their label debut in 2019. While we await their label debut, check out the band’s official video for“Coup d’épée” from Supermercado, the group’s acclaimed album from 2017.

About Corridor:
Corridor began when Jonathan Robert, Julian Perreault, & former drummer Marc-andré Chapdelaine started jamming together in 2012.  Though it wasn’t until bassist & longtime friend Dominic Berthiaume joined the band later that year that they began calling the band Corridor.  In November 2013 the band delivered Un Magicien En Toi (tr. “A Magician in You”), a motorik guitar-pop record.

On the heels of this first EP, Corridor re-entered the studio in June of 2014 to work on their first full-length record.  Collaborating with producer Emmanuel Ethier, the band spent nearly a year perfecting what would be their structured and assertive LP, Le Voyage Éternel(tr. The Eternal Voyage).  While they labored on the record, they were also each invested in their own creative pursuits.  Singer and guitarist Jonathan dove into his animation and illustration work (This would later prove useful as he has assumed the role of the band’s creative director, setting the tone for the visual aesthetic of their records and videos); Dominic began writing as a music journalist and photographer for outlets in Canada; And Julian continued pursuing an environmental design career, working on installations for well-known music festivals.

In the spring of 2015, the group released Le Voyage Éternel via L’oeil du Tigre Records, and plans for their first European tour began to take shape.  Marc-André departed the band shortly after the record’s release and was replaced by current drummer Julien Bakvis.  Julien, like his bandmates, works in visual arts as a co-owner of a screen-printing shop in Montreal. This group (Jonathan Robert, Julian Perreault, Dominic Berthiaume, and Julien Bakvis), has become the permanent lineup of the band.  That year Corridor toured Europe for the first time, including a show in Paris, promoted by “La Souterraine,” where they met the mystic psych-pop outfit Halo Maud (with whom they would later collaborate on the singleDeux Coeurs (tr. Two Hearts).

2016 was predominantly spent writing and recording. Corridor returned to the studio with Emmanuel Ethier to record their follow-up LP Supermercado (tr. Supermarket).  Repetition, progression, and minimalist rhythms would be the core of Supermercado, with melodic counterpoints coming together to form exhilarating sonic mosaics. The cult success of the album allowed Corridor to return to Europe, as well as make their first foray into the United States at SXSW 2018.  That year in Austin they played notable showcases forBrooklyn Vegan, Margin Walker, Felte/Part-time Punks, and M for Montreal.

In 2018 Corridor also appeared at Northside Music Festival in Brooklyn, where they performed with the likes of Snail Mail, Deerhoof, and Protomartyr. Shortly thereafter, they returned to the U.S. supporting U.K. post-punks Shame. They even found a fan in actor Michael Shannon who attended the show in Chicago and he requested a CD from the band. In April of 2019, Corridor accompanied the band Crumb on a sold-out American tour. Then in May of 2019, they followed with performances at London Calling Festival in Amsterdam and La Villette Sonique Festival in Paris.

Corridor will release their Sub Pop debut later this year.

What “The People” are saying about Corridor:
“The Montreal band Corridor knows how to highlight its strengths while getting in and out of a song with maximum efficiency: Sung in French, “Coup d’épée” only needs a little more than two minutes to let its robust guitar sound — a kind of weaponized jangle — fully worm its way in your head.” [“Coup d’épée” / Supermercado] - NPR Music

“Their jangly, synth-pop-tinged sound will entrance fans of the genre and post-punk newbies alike. On their latest LP, Supermercado, post-punk fans will gravitate towards their tight, neat percussion and spasmodic guitars while others will get lost in their bright vocals and spellbinding soundscapes.” [Supermercado] - PASTE

“Corridor sing entirely en Français. Don’t let that put you off though: the creativity and abundance of killer tunes found on their acid-baked 2017 album Supermercado break through the language barrier. Corridor are even better live, with a real joie de rock that knows no borders — guitars slash, harmonies soar, bodies a constant blur.” [Supermercado] - Brooklyn Vegan