Weyes Blood (pronounced wizebluhd) will release Titanic Rising, her fourth album and Sub Pop Records debut, worldwide on CD/LP/DL/CS April 5th, 2019. The album features the lead single  “Everyday,” and the previously released “Andromeda,” along with highlights “Movies,” “Wild Time,” and “Something to Believe.” The cover for Titanic Rising was shot in a bedroom submerged fully underwater (zero CGI).

The new single, “Everyday,” chronicles the chaos of modern love and dating - short attention spans, restlessness, and the continuous crusade (and carnage) to find some kind of all-encompassing soul mate. Watch the official video, in all its bloody terror, directed by Weyes Blood here. 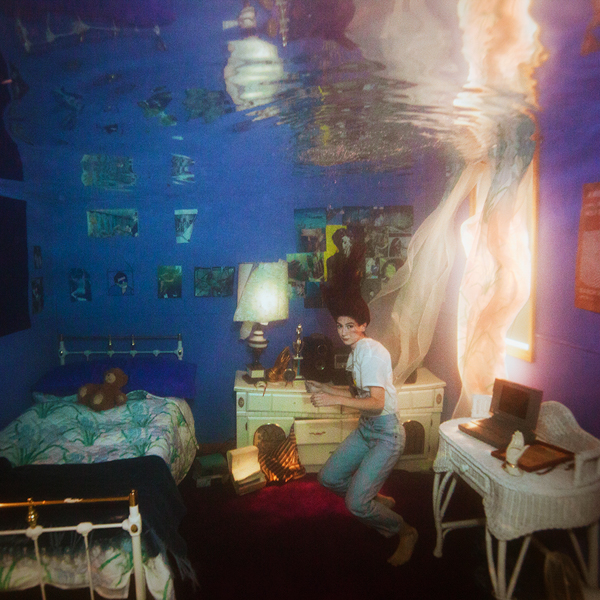 [Cover Art Photo Credit: Brett Stanley]
Titanic Rising, written and recorded during the first half of 2018, is the culmination of three albums and many years of touring: stronger chops and ballsier decisions. It’s an achievement in transcendent vocals and levitating arrangements, conversational lyrics and thoughtful commentary on the modern condition of our souls. Like the Kinks meet WWII (or is it Bob Seger meets Enya?) Titanic Rising manages to ride that line between classic songwriting and post-apocalyptic futurism.
Titanic Rising is now available for pre-order from Sub Pop. LP pre-orders in North America through weyesblood.com, megamart.subpop.com, and select independent retailers will receive the limited Loser edition on maroon colored vinyl (while supplies last).  LP pre-orders of Titanic Rising in the UK and Europe from select independent retailers will receive the limited Loser edition on red vinyl (while supplies last). There is also a new T-shirt design available now.
Titanic Rising
Tracklisting

Weyes Blood has also scheduled an intergalactic headlining tour for the spring of 2019 in support of Titanic Rising, which begins on April 22nd in Brighton, UK at the Haunt and currently ends June 13th at the Troubadour in Los Angeles. Weyes Blood and her band will visit the UK, mainland Europe, Canada, and the US for these dates. These dates will be preceded by a run of California shows, which run April 1st-April 5th, 2019. More 2019 dates to come.

Tickets for the newly announced shows go on sale Friday, February 15th at 10 am PST.

North America
May 14 - San Francisco, CA - The Independent
May 16 - Seattle, WA - The Tractor Tavern
May 17 - Vancouver, BC - St. James Hall
May 18 - Portland, OR - Doug Fir
May 21 - Minneapolis, MN - Turf Club
May 22 - Chicago, IL - Lincoln Hall
May 24 - Toronto, ON - Horseshoe Tavern
May 25 - Montreal, QC - Petit Campus
May 26 - Portland, ME - SPACE Gallery
May 28 - Cambridge, MA - The Sinclair
May 29 - New York, NY - Music Hall of Williamsburg
May 31 - Washington, DC - U Street Music Hall
Jun. 01 - Philadelphia,  PA - Johnny Brenda’s
Jun. 03 - Atlanta, GA - The Earl
Jun. 04 - Nashville, TN - The High Watt
Jun. 06 - Dallas, TX - Club Dada
Jun. 07 - Houston, TX - White Oak Music Hall (upstairs)
Jun. 08 - Austin, TX - Antone’s
Jun. 11 - Santa Fe, NM - Meow Wolf
Jun. 12 - Phoenix, AZ - Valley Bar
Jun. 13 - Los Angeles, CA - The Troubadour
Weyes Blood recently released “Andromeda,” a stellar offering also found on Titanic Rising. The track plays on a few themes (mythology, astronomy, technology), and is ultimately a love song about finding something long-lasting in an ever-changing world full of distractions, unrealistic expectations (“looking up to the sky for, something I may never find”) and past disappointments.
Stereogum recently named “Andromeda” one of its songs of the week, and said “There are few contemporary artists who sound like Natalie Mering. Her voice is enchanting, and on this song, she asks listeners to give themselves over to love, as if doing so will allow them to live in her plush, technicolor world a little longer.” And The FADER raves “…Mering, crafts melodies that feel rooted in another space and time.”
About Weyes Blood’s Titanic Rising:
The phantom zone, the parallax, the upside down—there is a rich cultural history of exploring in-between places. Through her latest,Titanic Rising, Weyes Blood (a.k.a. Natalie Mering) has, too, designed her own universe to soulfully navigate life’s mysteries. Maneuvering through a space-time continuum, she intriguingly plays the role of a melodic, sometimes melancholic, anthropologist.

Tellingly, Mering classifies Titanic Rising as the Kinks meet WWII or Bob Seger meets Enya. The latter captures the album’s willful expansiveness (“You can tell there’s not a guy pulling the strings in Enya’s studio,” she notes, admiringly). The former relays her imperative to connect with listeners. “The clarity of Bob Seger is unmistakable. I’m a big fan of conversational songwriting,” she adds. “I just try to do that in a way that uses abstract imagery as well.”

“An album is like a Rubik’s Cube,” she says. “Sometimes you get all the dimensions—the lyrics, the melody, the production—to line up. I try to be futuristic and ancient at once, which is a difficult alchemy. It’s taken a lot of different tries to get it right.” As concept-album as it may sound, it’s also a devoted exercise in realism, albeit occasionally magical. Here, the throwback-cinema grandeur of “A Lot’s Gonna Change” gracefully coexists with the otherworldly title track, an ominous instrumental.

Titanic Rising, written and recorded during the first half of 2018, is the culmination of three albums and years of touring: stronger chops and ballsier decisions. It’s an achievement in transcendent vocals and levitating arrangements—one she could reach only by flying under the radar for so many years. “I used to want to belong,” says the L.A. based musician. “I realized I had to forge my own path. Nobody was going to do that for me. That was liberating. I became a Joan of Arc solo musician.”

The Weyes Blood frontwoman grew up singing in gospel and madrigal choirs. “Classical and Renaissance music really influenced me,” says Mering, who first picked up a guitar at age 8. (Listen closely to Titanic Rising, and you’ll also hear the jazz of Hoagy Carmichael mingle with the artful mysticism of Alejandro Jodorowsky and the monomyth of scholar Joseph Campbell.) “Something to Believe,” a confessional that makes judicious use of the slide guitar, touches on that cosmological upbringing. “Belief is something all humans need. Shared myths are part of our psychology and survival,” she says. “Now we have a weird mishmash of capitalism and movies and science. There have been moments where I felt very existential and lost.”

As a kid, she filled that void with Titanic. (Yes, the movie.) “It was engineered for little girls and had its own mythology,” she explains. Mering also noticed that the blockbuster romance actually offered a story about loss born of man’s hubris. “It’s so symbolic that the Titanic would crash into an iceberg, and now that iceberg is melting, sinking civilization.” Today, this hubris also extends to the relentless adoption of technology, at the expense of both happiness and attention spans.

The track “Movies” marks another Titanic-related epiphany: “that movies had been brainwashing people and their ideas about romantic love.” To that end, Mering has become an expert at deconstructing intimacy. Sweeping and string-laden, “Andromeda” seems engineered to fibrillate hearts. “It’s about losing your interest in trying to be in love,” she says. “Everybody is their own galaxy, their own separate entity. There is a feeling of needing to be saved, and that’s a lot to ask of people.” Its companion track, “Everyday,” “is about the chaos of modern dating,” she says, “the idea of sailing off onto your ships to nowhere to deal with all your baggage.”

But Weyes Blood isn’t one to stew. Her observations play out in an ethereal saunter: far more meditative than cynical. “I experience reality on a slower, more hypnotic level,” she says. “I’m a more contemplative kind of writer.” To Mering, listening and thinking are concurrent experiences. “There are complicated influences mixed in with more relatable nostalgic melodies,” she says. “In my mind, my music feels so big, a true production. I’m not a huge, popular artist, but I feel like one when I’m in the studio. But it’s never taking away from the music. I’m just making a bigger space for myself.”