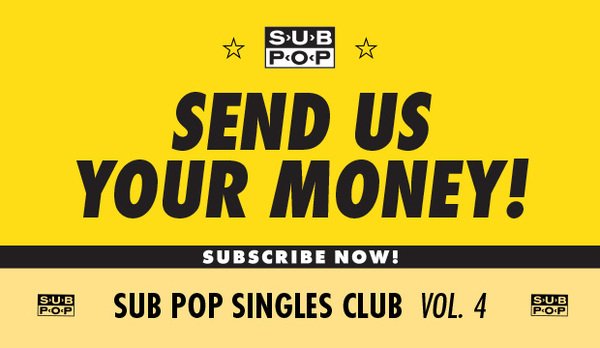 The forthcoming edition of Sub Pop’s legendary 7” singles series will include the following artists:

Seattle visionary OCnotes
Chicago industrialists HIDE
Arkansas merchants of doom Pallbearer
The Minneapolis Uranium Club Band
Japanese psychedelic explorers Kikagaku Moyo
Philadelphia pop experimentalists Man Man
Los Angeles singer-songwriter Shannon Lay
Angular Atlantans Omni
Seattle noise-rock/art-punk/uncategorizables Dream Decay
Laborers at the rarity-factory are currently hard at work generating test pressings and art for these limited-edition, colored-vinyl 7” singles, and we have more exciting artists lined up for the series. Do away with your FOMO (that means “fear of missing out,” we are told) and subscribe now! And then buy another as a gift for the record geek in your life! We will be taking subscriptions into early 2019 (exact date TBA), but after then these lovely vinyl artifacts will be forever unattainable to anyone who did not subscribe!

Singles Club Vol. 4 Overview
ATTENTION RECORD NERDS AND MUSIC FANS! We are now taking subscriptions for the fourth – and, who knows, perhaps the best! – incarnation of the legendary Sub Pop Singles Club. Are you desperate to hear new and exciting music? Do you pine for exquisitely packaged, colored-vinyl artifacts? Do you break into a sweat at the thought of missing out on limited-edition tchotchkes to hold over your friends’ heads? Well, subscribe now and feed your need!

All of this ancient history is to say:
1. WE INVENTED THIS SHIT!
2. We’ll get you lots of great music, and there’s a good chance you’ll wind up with some highly sought-after rarities.
And, 3. We’re seasoned pros at this and we’ll definitelyprobably get all your records delivered to the correct address right on time.

For the eminently reasonable postpaid (meaning shipping is included in the price; tax is not) price of $130 for the U.S., $170 for Canada, $185 for Mexico, and $195 for the rest of the world, you will receive twelve (12) 7” singles, shipped directly from Sub Pop HQ in Seattle to you, starting in April of 2019. These singles will feature exclusive tracks by artists from all over the map, both literally and figuratively, but tied together by the common thread of being great at what they do and inspiring to us. We hope you’ll feel the same. This offer is valid for a limited time only, so don’t sleep on it.