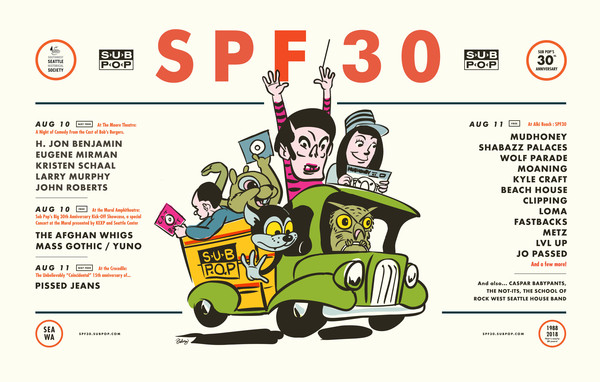 The festivities kick-off the evening of Friday, August 10th at 5pm, with The Afghan Whigs, Mass Gothic and Yuno playing a free, all-ages outdoor concert at the Mural Amphitheatre, presented by KEXP and Seattle Center.

Later that same evening, we are presenting A Night of Comedy From the Cast of Bob’s Burgers at The Moore Theatre, featuring H. Jon Benjamin, Eugene Mirman, Kristen Schaal, Larry Murphy and John Roberts. This is a ticketed event with proceeds to benefit Seattle’s YouthCare.

YouthCare works to end youth homelessness and to ensure that young people are valued for who they are and empowered to achieve their potential. Founded in 1974, YouthCare was one of the first programs to serve runaway and homeless youth on the West Coast. The goal was to help young people find safety today and build a future for tomorrow. Over the past four decades, YouthCare has defined best practices and developed programs that are a national standard for excellence. Using a youth-centered approach, they ensure that young people experiencing homelessness ages 12-24 have the hope, skills, and confidence to gain long-term stability.

Tickets for A Night of Comedy From the Cast of Bob’s Burgers will be $30 (plus fees). A special presale begins Wednesday, May 30th at 10am PT (presale code LOSER30), with tickets on sale to the general public Friday, June 1st at 10am PT. Tickets are available here. Doors are at 7pm, and the show is all-ages.

Seattle’s Alki Beach boasts some of the most awesome territorial (city/water/mountain) views the city has to offer, along with the occasional whale sighting, a somewhat diminutive replica of the Statue of Liberty, and some of the best local businesses to boot. We are stoked (and not a little surprised) that the city cleared the permits.

SPF30 will also have…A record fair-type event! A host of local nonprofit organizations! Food trucks! Beer gardens! (The food and beer and wine and soda or whatever, you will have to pay for! These parts are not free!) Good times and opportunities to embarrass yourself and those who’d always hoped for better for you! Plus, bands!

And closing out the weekend is a late show celebrating the unbelievably “coincidental” 15th anniversary of Pissed Jeans held at the Crocodile in Seattle. This show is 21 +, and doors are at 8pm. Tickets are $16 and available here.