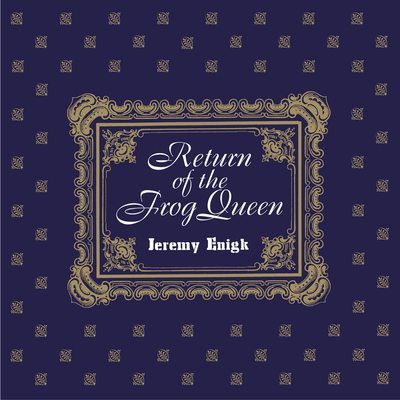 Return of the Frog Queen represents a major shift from the sound of Sunny Day Real Estate. The album features a 21-piece orchestra backing Enigk as he performs striking, dramatic, chamber-pop compositions that demonstrate the full breadth of Enigk’s talents as a singer, musician, and songwriter. The album was produced by Greg Williamson, who also produced Sunny Day Real Estate’s 1998 comeback album, How it Feels to Be Something On.

Return of the Frog Queen is now available for preorder from Sub Pop.  The vinyl edition of the album will be available on a limited run of purple vinyl (while supplies last).

Return of the Frog Queen
Tracklisting 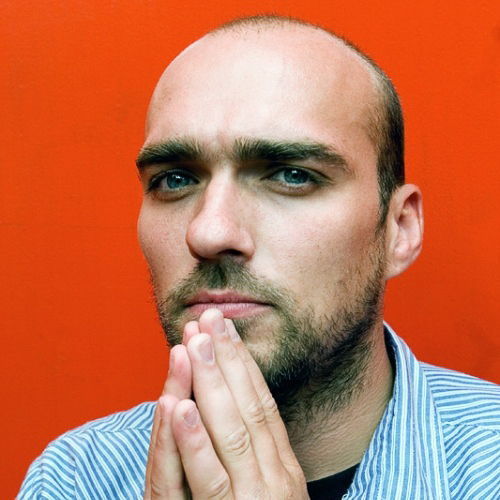 [Photo Courtesy of the Artist]

But Return of the Frog Queen is worth remembering. Or discovering. And most definitely celebrating. Though you rarely see it turn up on lists of 50 Best Things of Whatever Year We Wish We Still Lived in Because the Present Is Such a Consummate Drag, the album was an indisputable innovation in the world of ‘90s indie rock, rewriting a litany of unwritten rules about sound, subject matter, and solo identity for lead singers of successful bands.

As you probably know, Enigk was the singer/guitarist of Sunny Day Real Estate, the Seattle quartet widely credited as the Big Bang of the post-hardcore, indie rock variant of emo that would spend the next decade morphing into a massively commercial enterprise.

You can’t blame Sunny Day Real Estate for that, though. They were just a young, powerhouse band who happened to be several years ahead of their time.

SDRE’s debut album, Diary, and its first single, “Seven,” was a seismic event, not least in the lives of the band members. It was released in May of 1994, one month and two days after Kurt Cobain’s suicide was discovered. Diarybecame Sub Pop’s biggest-selling album since Bleach—a distinction that lasted until the next decade.

The story of the band’s splintering during the making of their follow-up album (LP2)—and triumphant reunion a few years later—has been well-told elsewhere. But for our purposes, it’s worth bearing in mind that the break-up drama formed the background from which Return of the Frog Queen emerged.

In the space of about two years, Jeremy Enigk had joined a band with some friends, toured the world, sold way more records than anyone had anticipated, been heralded with hyperbolic—not to say unwarranted—praise, become a significant voice to a lot of young listeners, experienced a religious epiphany that he spoke of publicly, and watched the band buckle and fall apart, much to the dismay of a public that was only just starting to figure out how to broadcast its anxious speculations and judgments on the internet.

By the time the band broke up, he had been loved, respected, celebrated, criticized, vilified, and reproached. He was 21 years old.

One might expect a person might respond to all this sturm und drang by making noisy, chaotic, electric guitar-driven music of the kind his now-defunct band made its name with. One might expect someone whose character and even sanity had been widely debated in public might want to write a definitive statement about his identity, his ideology, his id.

But Jeremy Enigk didn’t do either of those things. He made Return of the Frog Queen instead.

The songs that formed the basis of Enigk’s first solo album were about as far from the sound of Sunny Day Real Estate as you could imagine—unless all you’d heard of them was “Pheurton Skeurto,” the little piano songlet that sounds (delightfully) out of place on Diary.

Spare acoustic guitar figures and solemn, almost plainsong melodies are the foundational elements, which Enigk and his two key collaborators, producer Greg Williamson and arranger/conductor Mark Nichols, build up into astonishingly dynamic worlds of sound. But for all the swoops and bends, the unconventional entrances and exits, the arrangements remain organic, and perfectly united behind the singular human voice at the center of it all.

From the very first strum on “Abegail Anne,” the music is stately, mysterious, vaguely mystical, and not even remotely interested in the ironic detachment still popular in those days.

If anything, the arrangements, and the stupefyingly strong vocals, are flagrantly theatrical. Enigk sang hard over loud instruments in SDRE, but nothing prepared you for the versatility of his voice on Frog Queen. From a raspy whisper to conversational chest voice to clearly differentiated levels of high end—choked scream, melodic scream, head voice, falsetto, whatever you want. (And just a wisp of an unconscious British accent.)

But even at the peak of crescendo, as on the staggering climax of “Shade and the Black Hat,” on which Enigk wails “WON’T YOU STAY TONIGHT?” at the top of his range while the orchestra whips up a maelstrom—this music feels unfailingly intimate, while somehow remaining intensely private.

This is the central enigma (enigkma?) of the album: How can a song be both intimate and private? How can music that feels like fearless personal revelation grow more opaque the more closely you examine at it? Consider the author, and what his life was like at the time these songs were written and recorded. It’s easy to imagine a 21-year-old rock star manqué feeling overwhelmed, overexposed, overanalyzed, hungry for a kind of solace in which sound precedes meaning.

And yet, meaning is all over the record if you’re looking.

In among the pleasing, suggestively abstract imagery—“dallow water,” and “this dubious day,” and “window morning dream paradise”—Enigk plants lines that don’t require much interpretation at all if you’ve ever been anywhere near a break-up of a band or any other relationship, ever worried about what strangers might be saying about you, ever felt unseen, ever re-ran edited versions of old arguments in your mind, ever believed in something so fiercely that you were willing to lose friendships over it.

“What I’ve seen tears me inside…”

“Then the writing on the wall
said he is only the way
You said it was bad timing
at least we had timing at all.”

These lines are crucial, but they’re also non-sequiturs, there for you to discover if you’re looking, but the songs still work beautifully if you never do.

But beyond the literal, there’s a spirit of fabulism in the lyrics—hardly a surprise on a record named after amphibian royalty. Who is this “Abegail Anne”? Where is this sleepy, enchanted “Lewis Hollow”? What does “hi, hey” mean? And how does he proceed so artfully from idle, drowsy contemplation of a lizard in a castle, observing the tremors of its “dreary heart,” to the roaring, soaring cascade of frustration bursting forth at song’s end? Who is being addressed, and by whom?

Trying to tease out the puzzle of these artfully esoteric lyrics has proven to be one of the album’s most durable pleasures (or possibly frustrations, if you prefer things spelled out). As time passes, the words might seem meaningless or profound depending on who you are, not who Enigk was.

It makes for an odd spin on the idea of self-revelation. The album unquestionably opens a window onto an unorthodox artist, pursuing an unorthodox process, to arrive at a most unorthodox production. But as with any great artwork, the real subject is the person looking at it.

Even after two decades, it’s difficult to find a name for the atmosphere conjured by the album. There are traces of Incredible String Band pastoralia, but also a strain of Pink Floydish unease. Bowie between Man Who Sold the Worldand Hunky Dory. It’s not dark exactly, but only because your eyes have adjusted to candlelight. It feels mystical, even metaphysical.

Jack Rabid of The Big Takeover nailed it in two sentences from his review:

“He pounds a piano and howls like his wife just left him for his best friend, as the violins, violas, and cellos scrape at their strings as if to break them, and the flutes, piccolos, trumpets, trombones, French horns, and clarinets blow like they were hired by a wolf to blast a few recalcitrant pigs’ houses down. The waves of classical countermelodies are extraordinary, adding on to each other to create an 1812 Overture anvil clarion call, a roar so dense, so overpowering, it’s like gasoline exploding, even more so as they back Enigk’s fevered wail as if he were long past desperation.”

Return of the Frog Queen was the very last thing anyone would have expected to come out of the singer of Sunny Day Real Estate, or really, the Pacific Northwest at that time—which was not long past a different kind of desperation.

Without knowing or intending it, Enigk and his collaborators made a record that pointed the way out of Seattle’s mid-‘90s post-boom-years malaise, which had no shortage of talent and desire, but lingering ambivalence about ambition, and no clear sense of cultural direction.

And then all of a sudden, here came an utterly singular demonstration that when all else fails, the most reliable direction is usually inward.

It’s unlikely that a generation of hopeful teenage garage bands formed as a response to eager suburban teens getting an earful of Return of the Frog Queen. Maybe it’s just a coincidence then, that in the years following the record’s release (and the breathtaking live shows Enigk played with a stripped-down version of the 21-piece orchestra that plays on the record), indie music from the Pacific NW outwards, got more expansive, more idiosyncratic, a little riskier, and a lot weirder.

But it was for sure never the same.