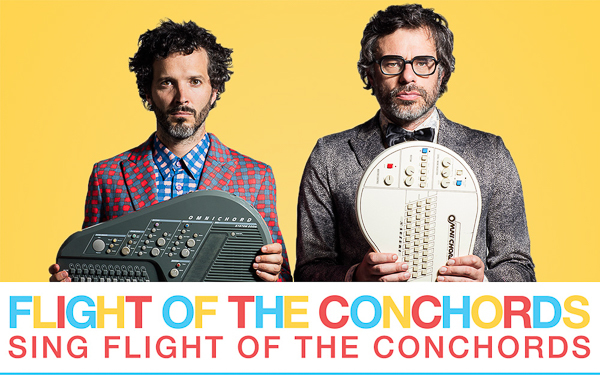 Flight of the Conchords and their representatives have addressed the issues with secondary ticketing sites and resellers that followed the October 23, 2017announcement. In an effort to thwart reselling at higher prices, tickets for the newly announced shows are not transferrable and the purchaser must show photo ID matching the lead booker’s name to gain
admission to the show.

Let us start the week off with this exciting news: Grammy Award-winning folk comedy duo Flight of the Conchords (aka Jemaine Clement and Bret McKenzie) will return to the U.K. & Ireland in March of 2018.

UPDATE: Tickets for newly announced shows will be on sale Friday, November 3rd at 10am GMT.

For up to date information on tickets, please visit  metropolism.uk/5N5azK.

Listen to Flight of the Conchords on Spotify and Apple Music

About Flight of the Conchords:
In 2005, Bret and Jemaine received an invitation to perform at the Aspen Comedy Festival, in Colorado, USA. Against tradition they left New Zealand’s summer to go to the northern hemisphere’s winter and were shocked by the snow when they stepped off the plane in t-shirts and jandles. The HBO executives liked their act and asked them to film a half hour performance for a stand-up comedy show called One Night Stand.

The HBO sitcom became a hit. This, along with the praise for the subsequent album releases (on Sub Pop Records) and the duo’s live show, was the comedic hat trick that catapulted Flight of the Conchords to international sensations.

The Conchords would also see major success individually. Jemaine lent his voice to the character Nigel the cockatoo in the Rio films (2011 and 2014).

He was cast as “Boris The Animal” in Men in Black 3 (2012). Jemaine also wrote, produced and starred in a variety of projects including the acclaimed Vampire comedy film, What We Do In the Shadows and People Places Things. More recently, he joined the cast of The BFG, the new Steven Spielberg adaptation of the Roald Dahl book, as the giant named Fleshlumpeater.

Bret has also been hard at work writing and acting for various television and film projects. Most notably The Muppets (2011) and Muppets Most Wanted (2014), the former of which won him an Academy Award for “Best Original Song” for the power ballad “Man or Muppet”. In 2012 he starred in the New Zealand black comedy Two Little Boys and then in 2013 he was cast in Jerusha Hess’s romantic comedy Austenland. He is currently writing the screenplay and songs for a film adaption of Neil Gaiman’s book Fortunately the Milk as well as penning tunes for the upcoming Disney film Bob the Musical.

And somehow, between all of the film and TV work, the Conchords managed to co-headline the “Oddball Comedy & Curiosity Festival” alongside Dave Chappelle in 2013.

In 2016, Jemaine and Bret announced the wildly successful “The Flight of the Conchords sing Flight of the Conchords Tour.”  The duo premiered new material alongside fan favorites, and quickly sold out amphitheatres and concert halls across the U.S. Also that year, the duo headlined Tenacious D’s Festival Supreme in Los Angeles (read more at Sub Pop).