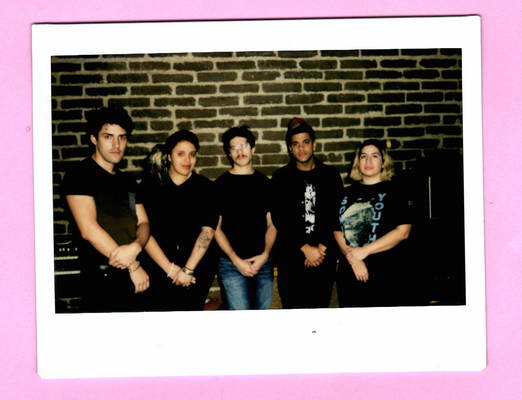 REAL NEWS:  Sub Pop has signed the politically charged Downtown Boys to a universe-wide record deal! The Providence, RI-based band is currently at work on their label debut, which will be released later this year. While we wait for details on the new album, the band will play a series of U.S. tour dates beginning March 6th in Baltimore at Ottobar and ending March 24th in Brooklyn at Baby’s All Right.

Highlights for the tour include a series of shows at SXSW March 14-17. These dates are bookended by two stand-alone performances: February 3rd in Washington, DC at the Black Cat and a sold-out April 20th show at Philadelphia’s First Unitarian Church. (Current tour dates listed below.

About Downtown Boys:
Now that the United States has a despot instead of a president, Downtown Boys are that much more driven to use their anger and their joy to drill away at the walls of white supremacy’s brain. Based in Providence, RI, the band released their acclaimed debut album, Full Communism, in 2015, and they have been touring their powerful live show throughout North America and Europe since 2012. They bring an aggressive dissonance to make a harmonious message against the erasure of people of color, queer people, femmes, and those of us who have always been in the center of the pit whether you knew it or not.

The band is currently working with Greg Norman and Fugazi’s Guy Picciotto on their second LP, and they join the countless people filling streets and airports around the country to loudly proclaim #NoBan, #NoRegistry, #FuckWhiteSupremacy.

“Those who still defend the supremacy of white male hetero-patriarchy had better watch out.” – Angela Davis, inauguration day speech, 2017.